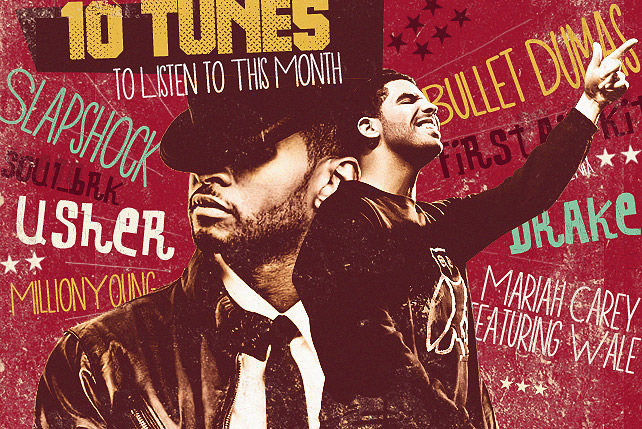 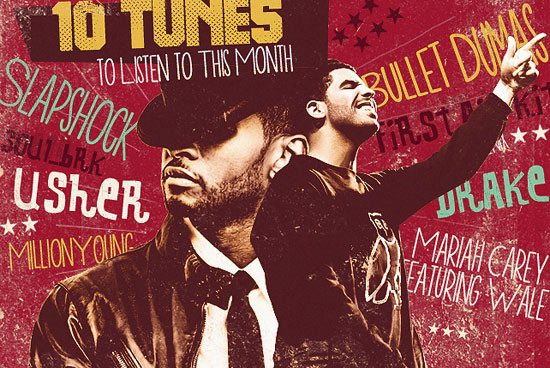 Drake has released a new song, which seems to hint at a new record come 2015 ("Listen up boy you’re better off eavesdroppin’/ We already got spring 2015 poppin’/ PND droppin’, OB droppin’"). "0 to 100" is reminiscent of "Started From the Bottom," with a familiar beat that doesn't get old. In "The Catch Up," things slow down and a James Blake sample is infused into the entrancing synths.

Fun fact: The 27-year-old Canadian rapper is also known for popularizing "YOLO" (You Only Live Once).

Bullet Dumas is an act to watch. His unique brand of folk music can be puzzling at first, what with the way it tends to follow no established form. His accented vocals and unpredictable acoustic sound are quick to grow on you, however. Have a listen to "Pssst!" and you’ll understand what we’re saying.

Fun fact: Dumas is an alumnus of the first ever Elements National Music Camp, held in 2010. He is also a math teacher.

Usher’s latest release is a tease with the right amount of funk and soul. The seductive beat features Usher crooning falsetto one second and going low the next. The cowbell percussion, handclaps, and jazzy keyboards all add the to sexy attitude of this track.

Fun fact: The R&B icon is expected to drop a new album this year, though no release date has been announced yet.

Eighteen-year-old B.P. Valenzuela has just released her EP, and in it is the electropop delight "Pretty Car." The single is an apt tune to listen to as you slowly let go of summer. The slow buildup and dance-y development, with breezy vocals and layered synths, merit repeated listening.

"You Don’t Know What To Do," off Mariah Carey’s latest record titled Me. I am Mariah... The Elusive Chanteuse, starts strong with the songstress’ slow and soulful vocals. It quickly picks up as Wale drops his verses, and the track becomes a true pop dance jam.

Fun fact: Me. I am Mariah... The Elusive Chanteuse is Carey's 14th studio album.

Fun fact: The music video was directed by Christopher Erwing and filmed in both Manila and Los Angeles.

First Aid Kit’s new folk single is a treat to the ears. The plucky guitars and the country twang in the vocals are relaxing, making "Cedar Lane" a perfect soundtrack for the quiet, rainy days of June.

The latest from Soul_brk is trippy and filled with feels, thanks to the "Superhuman" (Chris Brown and Keri Hilson) sampling. Each second is subtle yet piercing. It’s a sweet kind of torture listening to "Superfeelings."

Fun fact: Soul_brk is a solo project by Leon Esquillon.

The indie-electronica act from Florida is out with a groovy, soulful, and funky tune titled "Tell Me." In this release, old-school feel and futuristic beats merge to create a catchy end-of-summer anthem.

Jireh Calo’s smooth vocals stand out in this jazzy track highlighted by slick piano touches. The direction is so unpredictable that it gets you hooked until the very last second.

New Music Playlists Drake Usher
Your Guide to Thriving in This Strange New World
Staying
In? What to watch, what to eat, and where to shop from home
OR
Heading
Out? What you need to know to stay safe when heading out