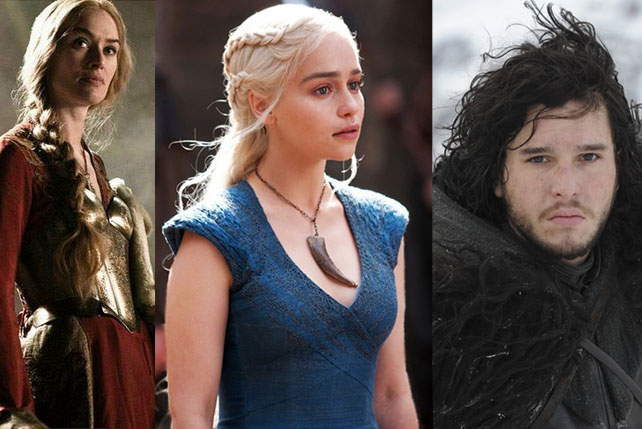 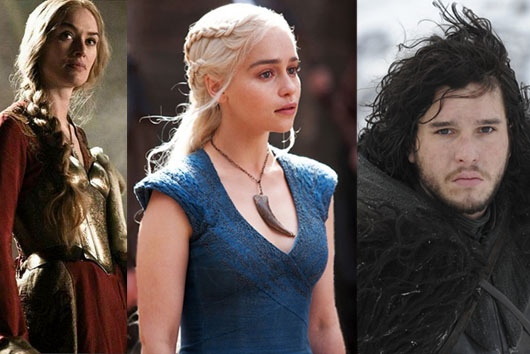 (SPOT.ph) Still reeling from the last episode of Game of Thrones? We are too. So instead of talking about the latest attempted murders, battles, and scheming, we’ve decided to take a look at the lighter side of the show-the clothes. Because of all the drama , you can always count on the nobles of Westeros to dress like the royals that they are. 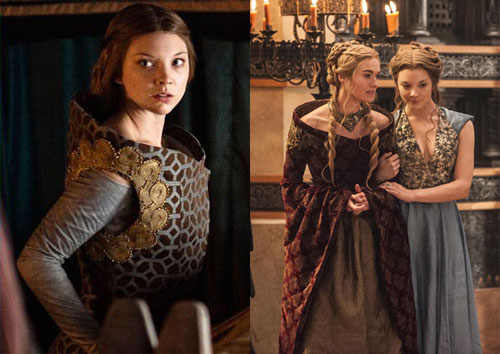 Margaery is unafraid to show a little skin, especially if it’s to entice the most powerful man in the room. When she was introduced in Season 2, that weird funnel-shaped dress caused quite a stir-and not just with the show’s audience. Ever the trend-setter, Margaery’s style even has her former (er, future-again?) mother-in-law, Cersei Lannister, following after her. Fun fact: the show’s costume designer says that the dress is a homage to Alexander McQueen’s design for singer Björk. 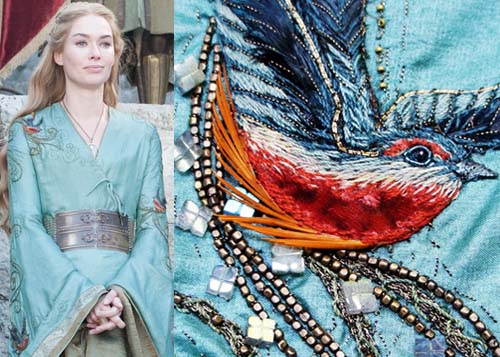 The Lannister colors are red and gold, but we sometimes see Cersei in other shades, particularly blue. Blue is a color she reserves for times when she does not need to be a fierce lioness, like this scene in Episode 6 of Season 2, when Cersei watches as her daughter, Myrcella, is shipped off to Dorne. You’ll also notice the birds embroidered onto her dress, another motif Cersei is fond of, since she likes to call others "my little bird." It’s probably more threatening than affectionate, reminding anyone that she’s a lion who can snatch them up with her teeth whenever she pleases. 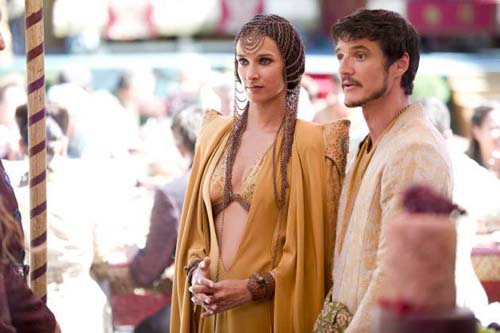 These two brought some much-needed fun to King’s Landing. Hailing from the hottest region of Westeros, Prince Oberyn and his lover, Ellaria, are dressed in orange splendor with golden sun emblems, reflecting House Martell’s sigil. Their outfits did not disappoint during Joffrey’s wedding, especially Ellaria who was not afraid to steal the show with that headdress. 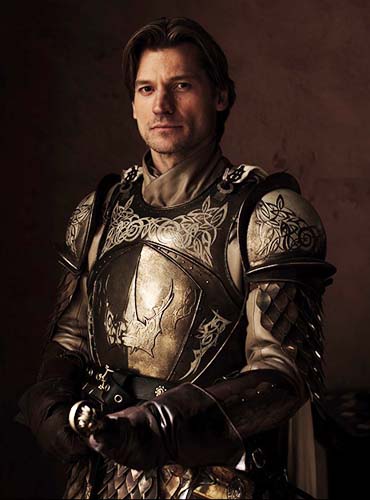 The ladies get to wear pretty gowns, but the guys get to wear equally intricate and beautiful armor in this show. Jaime Lannister certainly cuts a fine figure in his Kingsguard uniform of white and gold. It’s striking, compared with the drab black worn by most Westeros warriors. We can also be sure it’s not just fine-looking, but functional too, since the Kingsguard serve as the royal bodyguards of the Iron Throne. 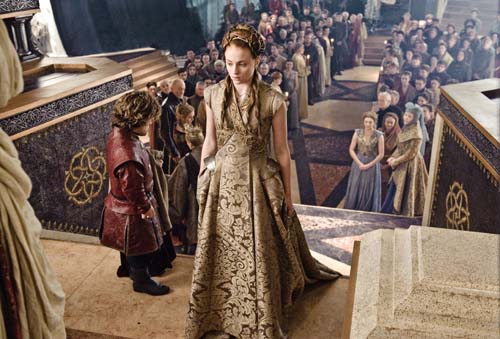 It was not the wedding Sansa dreamed of, but her dress was still a work of art worth admiring, at least. A closer look at her dress reveals heavy Lannister overtones with bright reds and lions prominently embroidered onto the gown. You might not see it, but the Stark direwolf and Tully fish sigils are also embroidered on the back, making it clear the Lannister lion reigns supreme. 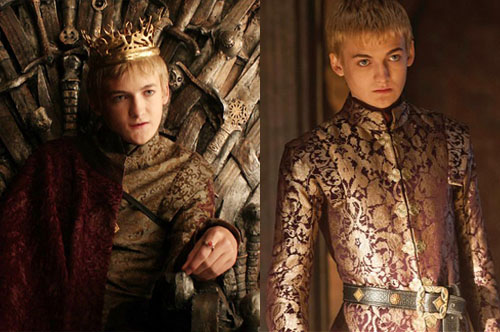 The whole of Westeros and anyone who watches the show all hate him (except maybe for his mother), but Joffrey was ruler of the Seven Kingdoms for a time and he certainly liked to parade around in fine clothes. His favorite accessory, of course, was his crown, fashioned with stag antler details to honor his (supposed) Baratheon heritage. 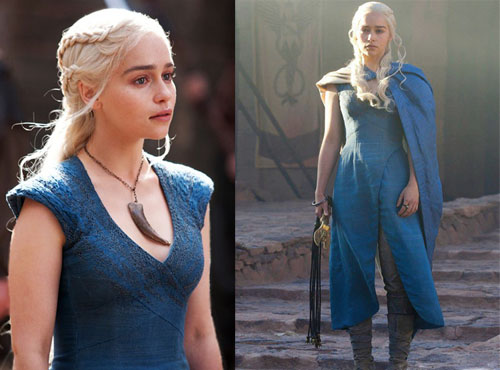 Daenerys’ wardrobe has seen the most transformation throughout the series, from delicate, virgin-like dresses to tough Dothraki garb. One of her more notable ensembles is her simple blue dress which, upon closer inspection, has dragon scale details. Her current favored accessories are her brass dragon claw necklaces. She is, after all, the mother of dragons. Don’t you forget it. 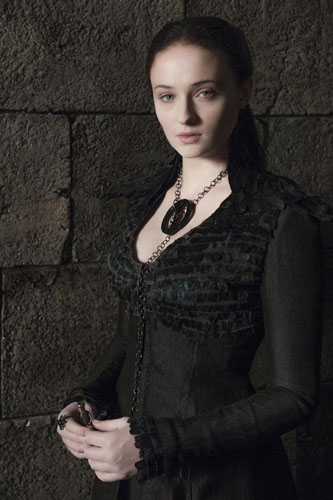 The more on-the-nose transformation via costume was Sansa Stark’s recent outfit. Now that she’s free from the grasp of the Lannisters at King’s Landing, Sansa is growing more confident in her smarts when it comes to playing the game. Her new look as "Alayne Stone," with her dark hair and Maleficent-esque dress, confirms she’s no longer a mere pawn to be played with. 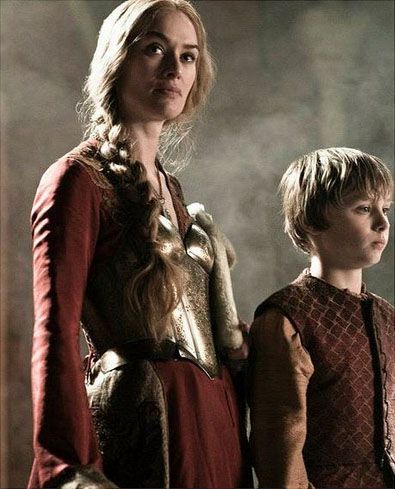 She might not have been on the battlefield during the Battle of Blackwater, but Cersei still needed some kind of armor, so she donned this gorgeous breastplate over a crimson version of her blue birds dress. Drunk Cersei plus this ensemble made her a formidable and unforgettable figure in this episode. 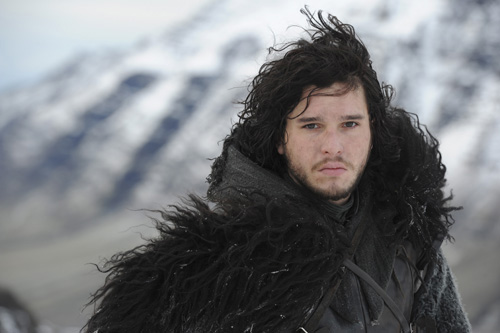 No one can work black and fur like Jon Snow. Look at that photo. Jon Snow, this is not Westeros’ Next Stop Model. Stop it.

Game Of Thrones Tv Fashion
Your Guide to Thriving in This Strange New World
Staying
In? What to watch, what to eat, and where to shop from home
OR
Heading
Out? What you need to know to stay safe when heading out