It’s enough to put you off parenting. At least for a while. 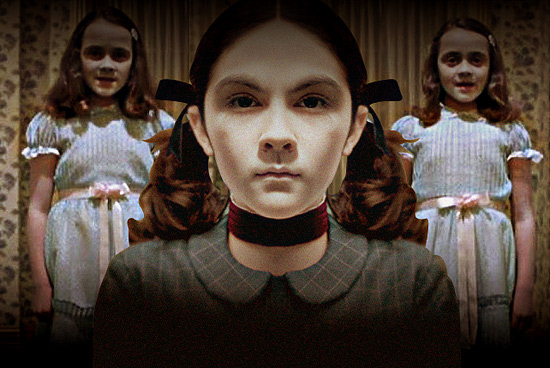 (SPOT.ph) Somehow, the thought of a creepy child is more terrifying than a ghost, haunted house, or murderous creature put together. Maybe it’s because some children can be frightening enough to begin with. (Have you ever seen a raucous kid on a sugar high?) Multiply that by 100 once they’re psychic, possessed, or undead.

To mark the arrival of October, we’ve rounded up 10 of the scariest kids in horror movies, just in time for your next movie marathon!

Danny Torrance from The Shining

It’s hard to stand out in a Stanley Kubrick horror film alongside Jack Nicholson but Danny Lloyd’s creepy performance as Danny Torrance is more than noteworthy. Danny’s supernatural abilities include talking to his imaginary friend, seeing twin girls horrifyingly mutilated, and then there’s that whole Redrum scene. Speaking of the twin girls from the movie, they also get a special mention for, well, being twice as creepy.

Henry Evans from The Good Son

We're just going to go right ahead and say it: Macaulay Culkin plays a sociopathic little sh*t really, really well. This kid delights in violence, from shooting a dog with a crossbow to dropping a dummy from a bridge, thus causing a major accident. He's really good at hiding his evil tendencies from his parents, too... at least until that cliff-hanging ending.

Esther from The Orphan

Okay, so Esther technically isn’t a child. Put simply, she’s a kid playing a grown-up pretending to be a kid. Right off the bat, we know there’s something off about her, especially when she starts saying things no child should even be thinking. Whenever someone starts to suspect anything, she takes care of them in the most brutal and vicious fashion. If there’s anything we learned from the movie, it’s that parents seriously need to do some intensive research before adopting.

While Carol Ann's house is in the middle of an escalating ghost infestation, she is drawn to a flickering TV set. She stares blankly at the TV until the ghosts escape from it and start to take over her house. She turns to her parents, and with a blank expression says, "They're heeeeeere." It was just one creepy moment, but it was unsettling enough to send shivers down our spines and cement her place on this list.

Damien Thorn from The Omen

Sure, Damien from the 2006 adaptation of The Omen was scary, but we're referring to the 1976 version where he embodied the son of Satan to terrifying proportions. Death follows this evil child wherever he goes, driving the people around him mad. He also doesn't hesitate to get rid of anyone who can pose as a threat-including pushing his mother down a flight of stairs and causing her miscarriage.

Isaac Chroner from Children of the Corn

Trust Stephen King to make even a cornfield scary. An entity called He Who Walks Behind the Rows convinces the children of a small village to sacrifice the adults to ensure a healthy corn harvest. The entity's human form is Isaac Chroner. Don't let the funny hat fool you; he's powerful enough to have an entire town worshipping and killing for him.

Alive, Gage Creed is a pretty cute kid. Dead, and he's an evil little boy who would cut your throat with a letter opener at a moment's notice. It's not his fault, though. His father had the brilliant idea of burying his deceased son in a malevolent pet cemetery despite repeated warnings. A reanimated Gage sneaks a scalpel out of his father's medical bag and kills their elderly neighbour. He then lures his mother to the house and kills her, too. To cap it off, he phones his dad and says, "Come play with me daddy! First I played with Jud and then I played with mommy. I had an awful good time. Now I want to play with you!"

Don’t let your guard down around Josh, even if he is polite and pretty much a genius. That’s exactly why you should run. Fast. First, he gets jealous over the birth of his little sister and tries to throw her down the stairs. When this fails, he takes it out on his grandmother. He even leaves broken glass for his own mother to accidentally walk on. This psychopathic kid is enraged for being "neglected" and "misunderstood," which prompts him to cleverly orchestrate his parents’ demise.

Toshio Saeki from Ju-On: The Grudge

It’s tough to hold your own against the vengeful spirit of your mother, especially when she can make those truly traumatizing sounds. Toshio, however, will always haunt moviegoers as the really creepy kid in the closet.

Regan MacNeil from The Exorcist

Aspiring to become a parent someday? Don't see The Exorcist, because you'll be watching Linda Blair's backwards head as she spews disgusting, green liquid all over your hopeful dreams of parenthood. If you've managed to get through that part in one piece, prepare for her horrifying spider-walk down the stairs and her swearing tirade at her mother and the poor priests trying to save her soul.