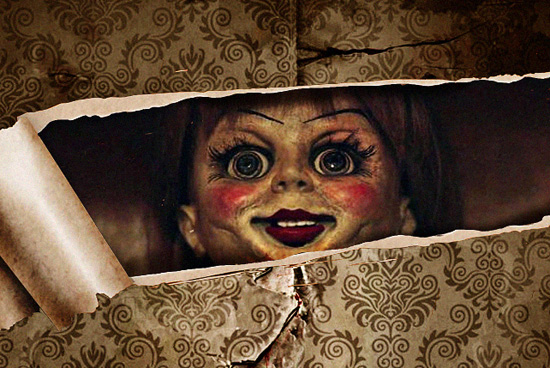 (SPOT.ph) Joining children and the elderly among the ranks of "never-going-near-that-with-a-10-foot-pole" in horror movies are toys-dolls in particular. Admit it: We have all pointedly looked at the unmerciful face of a doll and secretly feared for our lives. There's a disturbing appeal to that lurking darkness within an innocent exterior after all.

It's a common horror element: While the hero or victim explores an abandoned shack, a migraine-inducing high-pitched giggle reverberates through the walls, piercing through the silence. He turns around but nobody's there and then-boom-there's a broken down doll (we're betting porcelain) staring back at him. And well, it was nice knowing you.

Nothing ups the fear factor quite like a doll's blank expression as it disembowels its latest victim with an air of detachment. And on that note, let us channel the masochist in us and read on.

And for added atmosphere, try playing this song while you go through the list: 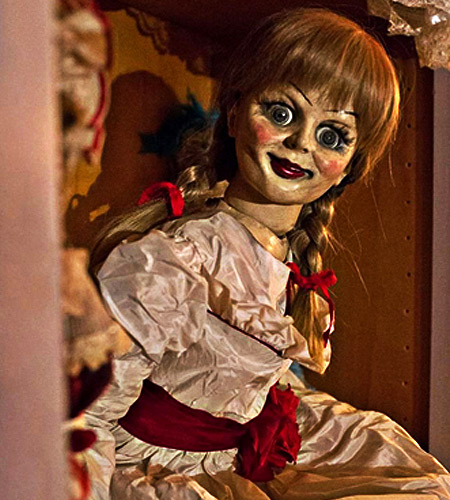 Expectation: A pretty porcelain doll found at a garage sale.

Reality: A pretty porcelain doll containing the violent spirit of a demon that's probably shopping for a new host.

They say truth is stranger than fiction; they should also say that it's a lot more terrifying. Nothing strikes more fear in a person than knowing that the bone-chilling story they just saw on screen is rooted in reality. Yep, Annabelle exists. 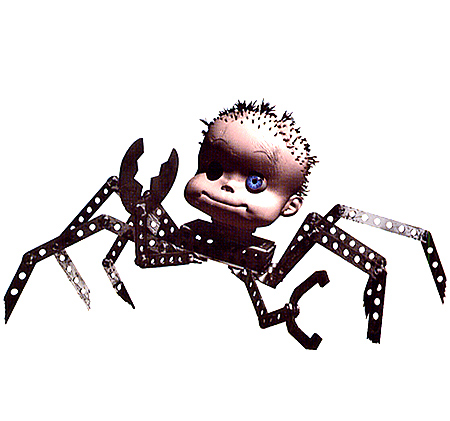 Reality: A mechanical abomination created to devour all your hopes and dreams. You might have wondered whether you were unknowingly sent to the Twilight Zone.

Babyface is the only non-horror entry in this list. And that's what makes it all the more unnerving. We guarantee that every '90s kid got a terribad surprise upon seeing this doll emerge from the shadows, spindly legs and all, in a freaking Disney Pixar movie. You really got us good, Disney. We'll send you the bill for our years' worth of therapy. 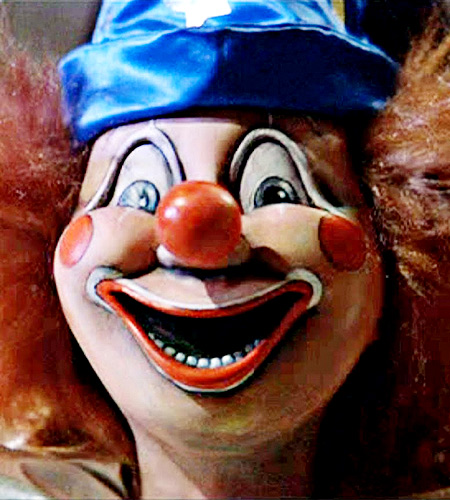 Expectation: A freakishly large clown doll that will give you nightmares for all eternity.

Reality: A freakishly large clown doll that will give you nightmares for all eternity-and it also moves!

Because clowns weren't obviously creepy enough (and they so are), this movie decided to combine two horror tropes (creepy clowns and possessed dolls), and scare the heck out of all of us. Thanks to that one scene where Mr. Clown Doll drags the kid under the bed, we've learned to sleep with one eye open (cue Metallica song). 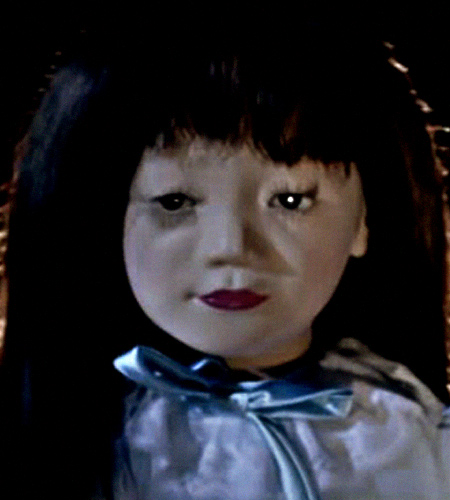 Expectation: Dolls given by a kind-hearted psychiatrist as a token of sympathy for grieving parents who recently lost their child.

Reality: A doll that takes a life of its own-isn't that always the case-and terrorizes the poor parents. "Habulin mo 'ko!"

Creepy dolls, you say? Look no further than our own homegrown horror flick directed by Wenn Deramas of Tanging Ina fame. Fear these child-sized dolls in all their espasol, Gluta-faced glory. 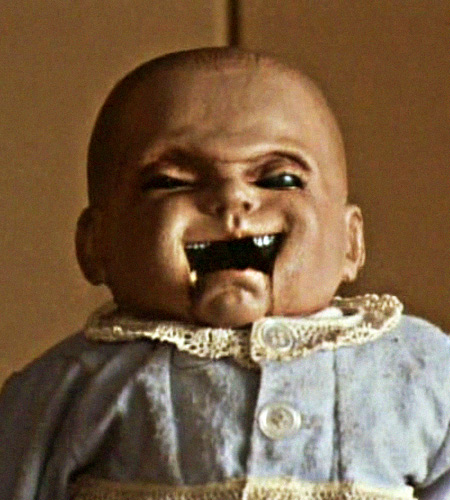 Expectation: A Baby Alive knockoff from a discount store.

Reality: A serial killer that can wield knives and guns with, uh, killer proficiency. Baby Oopsie Daisy also gains the ability to send people to hell later on in the series.

Baby Oopsie Daisy will not only promise you a very, very painful death using a myriad of weaponry, she will also emotionally abuse you and tear your self-esteem into pieces. That's just how she rolls. 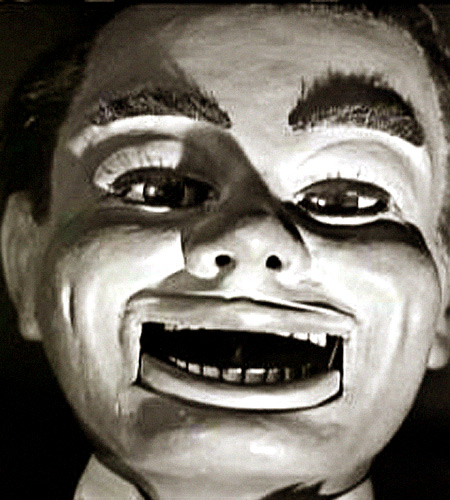 Expectation: A wacky ventriloquist’s dummy bringing joy and laughter to children of all ages.

Reality: An evil ventriloquist's dummy with a posh accent.

The oldest flick on our list-if you couldn't already tell by the black-and-white image. It was a small segment in a horror anthology known for being the definitive creepy doll movie. Hugo the doll convinces his owner to kill and when the fuzz catches them, he does a douche move and ditches his owner. Not cool, man. 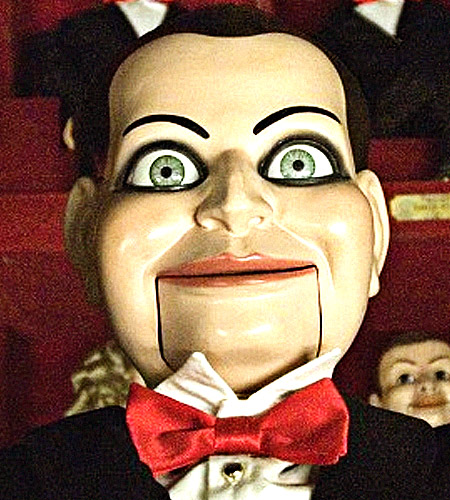 Expectation: A vintage ventriloquist's dummy with a rich history.

Reality: A wooden puppet possessed by its owner seeking revenge.

When the very first appearance of a doll consists of popping out from under someone's seat, then you better be prepared for a truckload of jump scares. Mary Shaw's favorite wooden puppet will continue to haunt you long after she's gone. 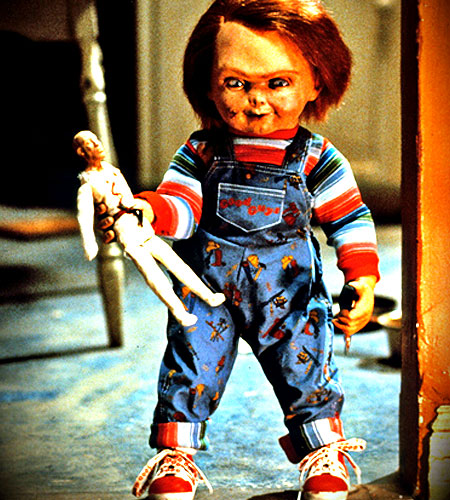 Expectation: An adorable talking doll that can provide a wonderful interactive playtime for your tot.

Reality: A hardened criminal trapped inside a doll's body that can't quite shake off the habit of killing everybody in sight.

Ah yes, good ol' Charles Lee Ray! Before the Chucky series became a cash-cow franchise, which swapped the scares for campy humor, we had Child's Play. The first installment in the series got it right with its less-is-more approach amplifying the psychological horror, only revealing the doll toward the end. Let's face it, the more we saw Chucky, the more comical he turned out to be. 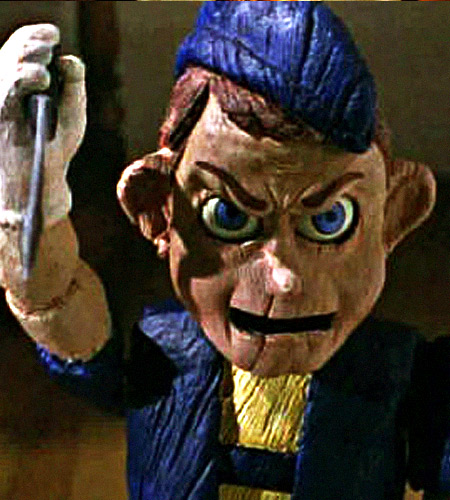 Expectation: The kooky wooden puppet that stole the hearts of millions in a Disney animated film.

Reality: A demonic puppet doll that's out to get you and your family.

Possessed doll? Check. Murderous intent? Check. Parents suspect the kid? Check. Huh. Where have we seen this before? One thing's for sure; this ain't your childhood cartoon. In fact, to drive the point home, much like this version's Pinnochio drives a knife into its hapless victim, there's even a scene where the wooden puppet smashes a cricket (a.k.a his conscience). 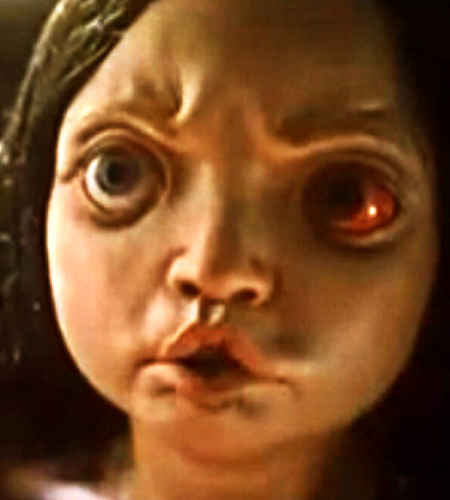 Expectation: An old broken doll holding some sentimental value to its owner's mother.

Reality: A possessed doll housing the tormented soul of a little girl, a victim of a brutal murder, who is now seeking revenge.

The doll only played a small part in the film and yet with just one scene, it was able to snatch away the spotlight (in the same manner that it will inevitably snatch away your pathetic soul). From the clunky stop motion animation to the uncanny valley expression-everything about this toy works against your sanity. "Let's stay together forever!"