Shows that were so entertaining, we need more than just low-quality YouTube videos to rewatch 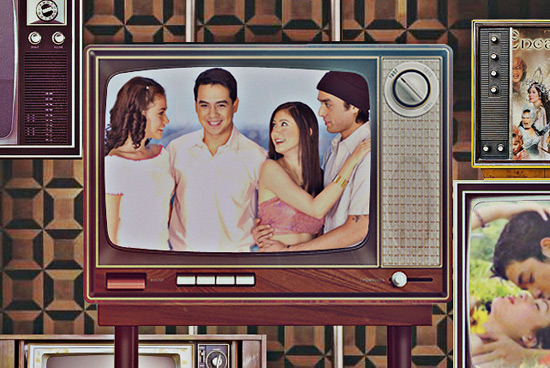 (SPOT.ph) As complicated, and sometimes veering on unrealistic as teleseryes are, we can’t deny how fascinating they are to watch...so fascinating that a good number of classics now have their own modern-day adaptations. To pay homage to the greats, we rounded up a list of 10 memorable teleseryes that had us glued to our seats and screens until the end credits rolled for the very last time.

Disclaimer: Teleseryes that will be or have already been remade were not included in the list. That means you, Mara Clara, Mula Sa Puso, and Esperanza.

If we’re talking creative story settings, Magkaribal has this in spades. Take all the usual drama and feuding, and place them in the cut-throat world of fashion. You have yourself a teleserye that you’ll be tuning in to every night. Bea Alonzo and Gretchen Barretto play sisters whose tumultuous past causes an intense feud with a scheming fashion designer, Vera Cruz (Angel Aquino). Circumstances tear the sisters apart and lead them to change their identities. The three women meet again years later, clashing spectacularly for our viewing pleasure.

It’s the teleserye that made Jericho Rosales and Kristine Hermosa household names. This TV sensation had a large, devoted fanbase that helped the show succeed for two years. Sure, its plot sounds pretty familiar: a love affair between people that are sadly separated by class and wealth. It’s the riveting subplots and acting from its stellar cast that really shine through. True love can and will prevail. Just ask Amor and Eduardo, Yna and Angelo, and Claudia and Simon.

This critically acclaimed series bagged its fair share of awards during its heyday, including the PMPC Star Awards Best Primetime Drama Series. The unconventional story revolves around twins Lorrea and Lorrinda (both portrayed by Lorna Tolentino), caught in the middle of a treacherous drug underworld. We also got to watch a much-younger John Lloyd Cruz and Bea Alonzo in their first TV series as a love team.

Original run: May to December 2005

This sprawling fantasy saga spans three installments, namely: Encantadia, Etheria, and Encantadia: Pag-Ibig Hanggang Wakas. In the show, Encantadia is a vast, enchanted realm made up of four kingdoms. The peace and future of the land rests on each of the kingdom’s precious gemstones that represent four elements. The thrilling story kicks off when the kingdom of Hathoria wages a war across Encantadia to steal all four gemstones, in the hopes of gaining control. It’s up to the three remaining kingdoms to save the realm.

It may be an underrated concert-slash-musical teleserye, but it features the powerhouse of Nora Aunor and Cherie Gil in the lead roles as half-sisters. Laura (played by Nora) is a single mother struggling to support her two daughters, Melody and Bernadette. She turns to her half-sister for help and in return, Carmela convinces the former to raise Bernadette as her own. This arrangement causes further complications when Melody and Bernadette (now all grown-up) meet again...as full-fledged singers. Plot aside, this show also gave audiences the immortal Nora Aunor line, "Nasaan? Nasaan si Bernadette at Melody?"

Think Romeo and Juliet meets Filipino politics. Intrigued? So were the avid viewers of this teleserye way back in 2001. Sunshine Dizon (Rosa Camilla) and Cogie Domingo (Carlito) personify the famous Shakespearean couple, whose epic love goes against all odds as the political conflict between their families grows. It all starts with the failed murder attempt on the governor and patriarch (played by Eddie Garcia). This entangles the three women in his life and their children into the complicated but compelling "whodunit" mystery plot of the story.

The story is set in 1912 Bulacan where the town's President Municipal, Don Teodoro (Ronaldo Valdez) announces the marriage between his eldest son Alfonso (Bernard Palanca) and Angelina (Claudine Barretto). The latter only agrees to the marriage in order to free her father Sebastian, who is accused of killing an American supporter. Her heart, however, belongs to her childhood sweetheart and Alfonso’s brother, Benedict (Carlos Agassi).

Flash forward to the present:  Norberto (Robert Arevalo) and Corazon (Boots Anson-Roa) oversee the engagement party for their daughter Angeline (again, Claudine Barretto) and Hector (Troy Montero). As an engagement gift, Angeline's parents buy a rest house in Bulacan-the same one where Angelina and Alfonso were betrothed decades ago. Gloria Romero plays the house’s elderly caretaker, who holds the thread that binds the past with the present. Pretty out-of-the-box stuff.

Jericho Rosales and Carmen Soo portray star-crossed lovers who defy class, culture, and all odds in the name of their love. Rocky (Jericho) seeks justice for the death of his father, while Garie (Carmen) is in search of her father. Their lives clash when Rocky’s work as a PDEA agent leads him to Malaysia, where he secretly investigates his father’s death. His only clue is the face of the man who visited his dad before he was murdered-who is, plot twist, Garie’s father.

This drama reunites the beloved love team of Richard Gomez and Dawn Zulueta and features a sprawling story set in the fictional Olivarez province. Sisters Virginia (Susan Roces) and Margaret (Helen Gamboa) both vie for the heart of Joseph (Eddie Gutierrez), but it’s both Joseph and Margaret who marry and later have a son, Marco (Richard Gomez). He falls for Emily (Dawn Zulueta), a daughter of one of the workers in their family’s plantation. However, certain events cause Marco to marry the wealthy Jane instead.

Meanwhile, laborer William Alcantara (Joel Torre) adopts a young boy named Daniel (Coco Martin). Virginia also assumes the role as a "grandmother" to Daniel, and the latter forms a close friendship with William’s daughter, Katerina (Julia Montes). Things only get more complicated when Marco and Jane return with their children Nathan (Paulo Avelino) and Johanna (Melissa Ricks). Decades-old rivalry and plenty of scheming plague this tangled but riveting web. How about that grand wedding finale, huh?