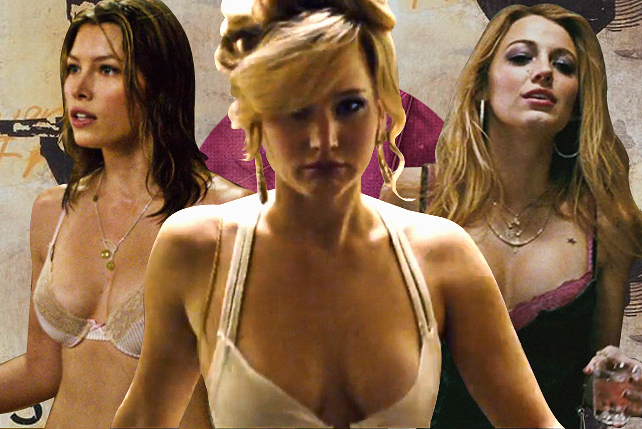 As one underwear brand put it: "It's sexier than nude" 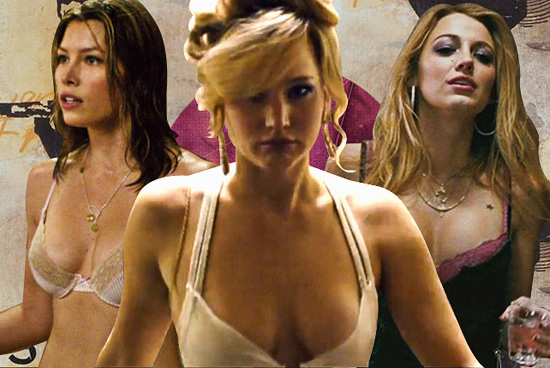 
Supermodels jumping ship to the silver screen isn't a Hollywood rarity, but none has made a bigger splash than Brooklyn, who plays the object of Adam Sandler's affection in the movie. Remember the scene where she ascends from the water in a yellow two-piece bikini? Of course you do. In fact, the Sandman said it best: "Does the hotel know you took those pillows, honey?"

Ann-Margret in Carnal Knowledge (1971)
Prior to her turn as Jack Nicholson's sexy love interest in this Mike Nichols picture, audiences knew Ann-Margret best as the cute and innocent Kim MacAfee in the 1963 musical Bye Bye Birdie. Her appearance in Carnal Knowledge erased all that and mankind was given a puzzle, "How does that dress stay in place?"


It seems J-Law can do no wrong, and her turn as a con artist's highly unstable wife in this David O. Russell crime drama only reinforces that claim. Case in point: The scene where she walks into a bar in an ultra low cut dress and a loose bun. It almost makes you forget that her character is an irresponsible nutjob.

Drew Barrymore in Charlie's Angels (2000)
When Drew entered the car in a zipped-down tracksuit and distracted the clueless chauffeur by slowly licking the steering wheel...well, safe to say it was etched in our memories forever. Blondes indeed have more fun.

Blake Lively in The Town (2010)
Before this Ben Affleck-helmed drama, all we knew of Blake was that she played a socialite in the teen drama series Gossip Girl. Next thing we know, she's talking about schlong sizes in a thick Boston accent. This sudden change of character is a bit hard to comprehend, but the distraction provided by her cleavage-friendly outfits probably has something to do with the confusion.

Scarlett Johansson in He's Just Not That Into You (2009)
Some women try not to be sexy. Scarlett? She embraces it. She’s so in your face with it, it’s almost scary. See Under the Skin.

Jessica Biel in I Now Pronounce You Chuck & Larry (2007)
When Adam Sandler questions the authenticity of Jessica's breasts in the film, she has no choice but to defend herself. "These are real, by the way. Nobody thinks they are. Everybody thinks they're fake. But they're real. In fact, I've got nothing to hide. Feel 'em," she insists. And so he does. Well played, Mr. Sandman. Well played.

Kate Upton in The Other Woman (2014)
Not everyone has the chops to steal Cameron Diaz and Leslie Mann's thunder in a romantic comedy, but she did just that by frolicking along the beachfront in her white bikini. A blonde bombshell with a million dollar beam and a carefree attitude-Kate Upton is the American dream.

Eva Green in Casino Royale (2006)
James Bond has romanced his share of women, but we can't picture him saying this to just anyone else: "I have no armor left. You've stripped it from me. Whatever is left of me...whatever I am...is yours." Ladies and gentlemen, behold the power of cleavage-baring garb!

Cleavage Boobs Best Movies
Your Guide to Thriving in This Strange New World
Staying
In? What to watch, what to eat, and where to shop from home
OR
Heading
Out? What you need to know to stay safe when heading out