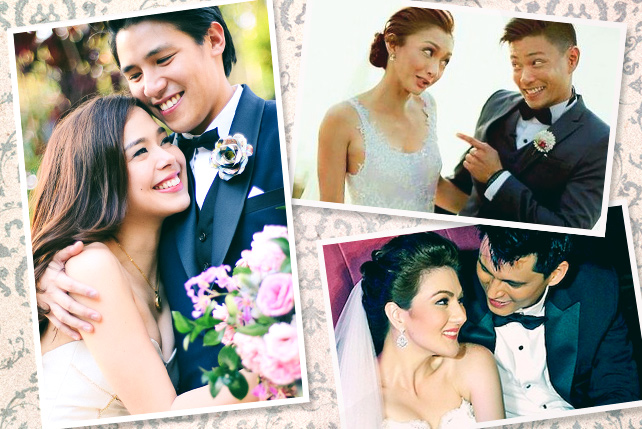 Sudden and intimate ceremonies we can’t help but gush over 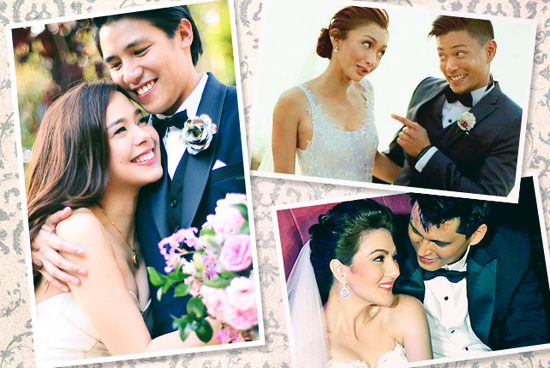 (SPOT.ph) Sometimes, the element of surprise is more exciting. Just ask these local showbiz personalities who have opted out of the conventional celebrity "I Do." These couples prove that just because something is under the radar doesn’t mean it’s any less romantic or meaningful. In fact, when celebrities tie the knot away from the spotlight, it’s more fun for the rest of us who get to see all the details unfold later. Here are 10 beautiful weddings that took us all by surprise.

Video from Niceprint Photo on Vimeo

It’s a wedding that caught everyone by surprise-including the bride! Carmina thought she was going to a shoot for an endorsement, but Zoren had other plans. A sudden proposal under a cherry blossom tree (Carmina’s favorite and evocative of his failed, earlier marriage proposal) led to a lavish wedding with high-profile celebrity guests. By the way, even the wedding dress (designed by Paul Cabral) was created without Carmina ever going for a fitting. Talk about grand gestures.

After knowing each other for 10 years and being in a relationship for three, bandmates Jim Bacarro and Saab Magalona tied the knot in an intimate ceremony in Baguio City. It was a quirky wedding full of personality, from lightsabers to comic-book boutonnières and adorable vows that tug at heartstrings. Oh, and music. Lots and lots of music. (We’re loving the superhero-themed wedding invites, by the way!)

Drew and Iya: The Wedding Film from Jason Magbanua on Vimeo

This picturesque wedding is as private as they come: no prying media eyes and only their closest friends and family members. Their location-the Meditation Point in Kawayan Cove, Nasugbu, Batangas-makes it even more dreamy, with a ceremony overlooking a breathtaking cliffside sunset. It took them almost nine years to walk down the aisle, and from what we can see, these travel junkies loved the journey as much as the grand destination.

When singer-actress Jolina Magdangal and Rivermaya drummer Mark Escueta exchanged vows twice, they didn’t hold back on the whimsy but ensured that both occasions were kept under wraps. Guests first witnessed their private church wedding, then a charming, boho-inspired garden wedding several days later. For the former, Jolina donned a pink RTW dress and the latter, a white bohemian gown accessorized with a wreath and fairy wings. (Check out more photos from their garden wedding.)

No one took privacy more seriously than Ryan Agoncillo and Judy Ann Santos, whose surprise ceremony took place at 6:30 a.m. in San Juan, Batangas. Selected guests showed up at the event with no cellphones and cameras, and according to reports, local authorities secured the area from the plaza extending to the church. Despite all the hush-hush preparations, their creative wedding invites were anything but.

Maricar and Richard : Secret Wedding from Mayad Studios on Vimeo

Alright, we admit to crying while watching this wedding video one too many times. When Maricar Reyes and Richard Poon said their "I Do’s" at The Bellevue Hotel in Alabang, the couple’s closest friends and family kept everything low-key until the wedding video was officially released. Our personal favorites? Their very first kiss, and of course, Maricar’s gorgeously embellished dress from designer Francis Libiran.

Oyo Sotto and Kristine Hermosa from Bong Sare on Vimeo

Oyo Sotto and Kristine Hermosa tied the knot in a laid-back, seaside ceremony adorned with whimsical seashell details and floating Japanese lanterns. Just how laid-back were they, you ask? The couple donned white Chuck Taylors during the big day. (Kristine’s had lace embellishments on hers!) 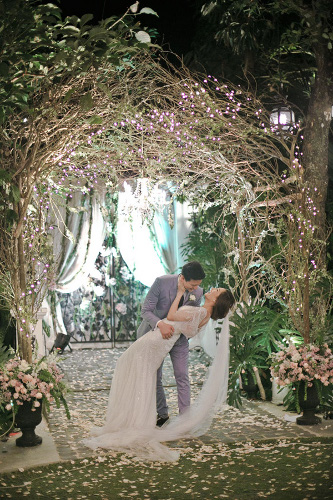 On January 20, model Bea Soriano married her longtime boyfriend, entrepreneur Eric Dee in a sophisticated but intimate garden ceremony in Antonio’s, Tagaytay. There were no media cameras that day, but their high-profile and very fashionable guests documented the picture-perfect event via the hashtag #BERIC2015. (Check out more gorgeous photos from the event.)

It’s a secret wedding that quite possibly broke its own fair share of hearts. Chris Tiu married his first and only childhood sweetheart, Clarisse Ong in their favorite city of Vancouver, Canada. According to reports, guests were limited to only the most immediate family members and close friends.

After a very public proposal, JC Intal and Bianca Gonzalez quietly tied the knot in a beautiful private wedding at El Nido, Palawan-exactly a week before their announced date. It’s a ceremony in paradise we can only dream of, later capped off with a grandiose wedding celebration at the Big Dome.

Wedding Celebrities Low-key
Your Guide to Thriving in This Strange New World
Staying
In? What to watch, what to eat, and where to shop from home
OR
Heading
Out? What you need to know to stay safe when heading out