Check out this week’s must-see gigs, parties, events, and more!

Check out this week’s must-see gigs, parties, events, and more! 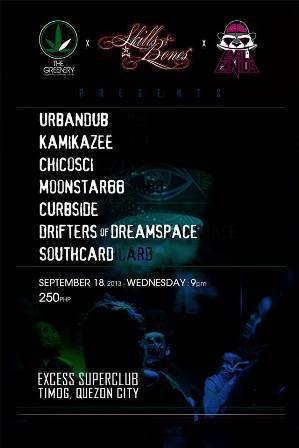 Why you should go: All these big names in rock and all for just P250? You can't pass up that chance! Catch Urbandub, Kamikazee, Chicosci, Moonstar88, Curbside, Drifters of Dreamspace, and Southcard in Excess Superclub's Rock Night special. 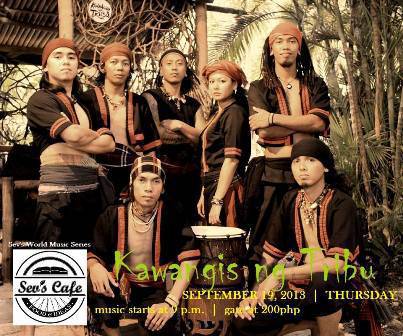 Why you should go: If you want to get in touch with nature with music, listening to Kawangis ng Tribu would be the best way to do it. Their music has been described as "a fusion of various ethnic rhythms, tribal drumming and earth flow beats, sung in different dialects." This ethnic band is here all the way from Palawan so better not miss them! 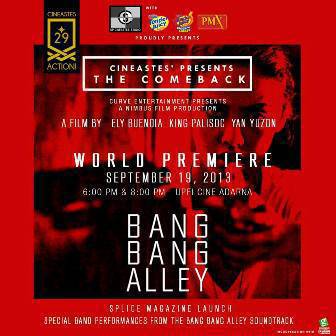 Where: UP Cine Adarna, University of the Philippines Diliman, Quezon City

Why you should go: Musicians Ely Buendia, Yan Yuzon, and King Palisoc direct their very first feature-length film! This crime drama stars the likes of Joel Torre, Althea Vega, Megan Young, Gabe Mercado, Bela Padilla, Jimmy Santos, and more. There will also be LIVE performances from the bands who contributed to the film's soundtrack after the screening.

Why you should go: The new Imago, with a fresh but hopefully equally talented line-up, will be making their debut performance! Turbo Goth, Philia and other bands will also be playing. 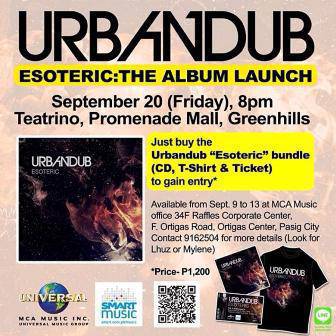 Why you should go: Be the first to hear tracks from Urbandub's latest album and jam with the band for the whole night!

Other details: Gig starts 8 p.m. The Urbandub Esoteric "bundle" that includes a ticket + a copy of the album + shirt will be available for P1200 at the MCA Music Office. For more information, contact (02)9162504

Why you should go: See Gloc-9, Up Dharma Down, General Luna, Ebe Dancel perform while checking out some pretty cool digital artworks!

Other details: The awarding concert starts at 6 p.m. Tickets are available for P300 at SM Tickets outlets. 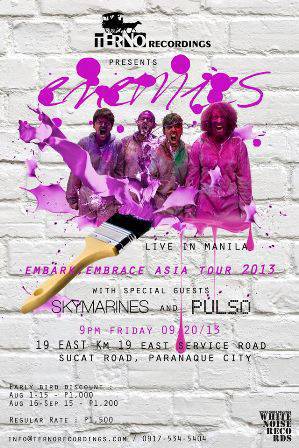 Why you should go: International rock band Enemies embark on their Asian tour to promote their sophomore album Embark, Embrace. Luckily enough, the Philippines is included in one of their stops! Special guests include Skymarines and Pulso.

Why you should go: Wouldn't you like to get an entire night of Ely Buendia and his voice and all for a good cause? Proceeds of this fundraising concert go to the Philippine Educational Theater Association. Helping out never sounded better. 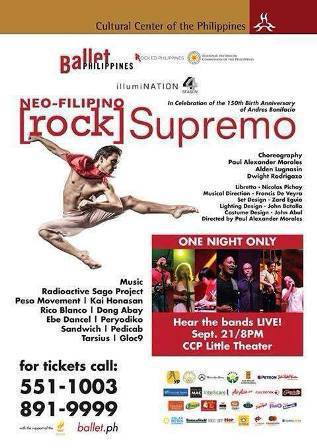 Why you should go: While this ballet rock musical about the young Andres Bonifacio runs from September 20 to 29, you have to catch the September 21 performance. Why? Well, for one night only, the bands behind the soundtrack will be playing the music accompaniment LIVE! That includes Radioactive Sago Project, Rico Blanco, Pedicab, Sandwich, Ebe Dancel, Gloc-9, and more! 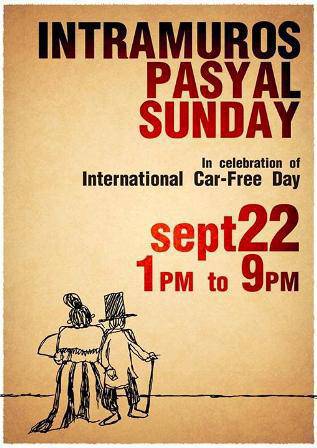 Where: Juan Luna Plaza (before General Luna Street) in Manila

Why you should go: Filipinos are sure fond of street parties and here's another one that certainly brings back the good ol' times. In celebration of International Car-Free day, Juan Luna plaza will be closed off and serve as the venue for a unique street party, complete with street vendors and food trucks. There will also be performances from a mariachi band, singers, and dancers from Mexico!

Other details: This event is for free. Whole day partying from 1 p.m. to 9 p.m.

Gig Guide Spotgigguide Parties Nightlife Bars Gigschedules Clubscene Barscene September2013 Freegigs Streetparty Musical Albumlaunch Imago
Your Guide to Thriving in This Strange New World
Staying
In? What to watch, what to eat, and where to shop from home
OR
Heading
Out? What you need to know to stay safe when heading out