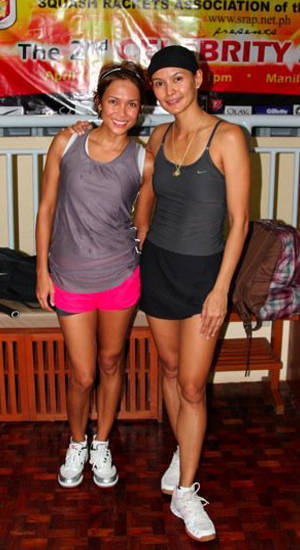 Model, jewelry designer and and top endorser Tweetie de Leon-Gonzalez’s three-year interest in squash might just be the best thing that could happen to the popularity of the once-again--fledgling sport in the country. Gonzalez was elected PR Officer of the Squash Rackets Association of the Philippines in 2007 and is the lone female on the board. Her brainchild, the Celebrity Squash Tournament is on its second year, was held April 18 at the Manila Polo Club. Among the well-known personalities spotted at the tournament were Drs. Vicki Belo and Hayden Kho who had just jetted in from Paris; TV hosts/models Angel Jacob, Phoemela Baranda, Hans and Marilen Montenegro, ex-model/model agent Grace Molina, ï¿½ LPGA golf champion Jennifer Rosales, ï¿½ fashion designer Patrice Ramos-Diaz, Congressmen Roman Romulo and Gilbert Remulla, socialite Neny Montinola, squash aces, entrepreneurs Duane Santos and Gil Cosculuella, designer Mandy de la Rama-Santos, and model/designer Solenn Heusaff. SPOT chatted with Gonzalez about her latest athletic endeavor: What is the goal of the Celebrity Squash tournament? To bring more awareness and interest for the sport. Squash had its glory days back in the 1980s and we’d like to bring back the fever it used to enjoy. Did you meet these goals? Yes we did, little by little. It is receiving due recognition but the effort to promote the sport along with all other SRAP’s goals shall continue. Was this year’s tournament better than last year’s? Yes. There was a bigger turnout and more excitement leading up to the tournament date. Last year’s tournament served as a test for our concept’s viability. We received great feedback encouraging us to pursue a second one. Squash enthusiasts were more than willing to pitch in to help with the project. The Squash Committee of Polo Club offered their courts for the event. I take it as a good sign that the squash community was abuzz with news of the fun tournament. I’m happy other clubs are trying to get involved to help to revive the sport. [svgallery name="new-celeb"] How did you convince your sponsors to help out? Was it difficult getting them to do so? Not very difficult. I called on those who were interested in our goals and who see the squash community as their market. Most of them were my sponsors last year and the additional ones are squash enthusiasts themselves. It helped that we were all moving in the same direction. I also got a lot of support from the brands I am associated with: Nestlé, Nike, Oil of Olay, Jewelmer; and from good friends: Collezione C2, New Balance, Randy Ortiz, Folded & Hung, Speedo. New brands came in this year: Supply Oilfield Services, Karakal, Fresh Papaya Soap, Crocs, and Gillette. What exactly did you do for this tournament? Whew, where do I begin? I conceptualized and proposed it to SRAP last year when I joined the board. I thought it was the quickest way to create some buzz for squash for it to get some attention. This being my personal cause and project, I pretty much set the direction. I did the marketing for sponsors, filling in the line up, did the PR-but with the full, full support from the SRAP board. What were the highlights of the tournament? Any interesting anecdotes? Duane Santos, a long time squash player and Polo club champion, told me in the beginning of the tournament that he has never felt such high energy in the squash scene since the 1970s! I felt so good hearing that. Were you pleased with the results? I got my high after the event, when almost everyone sent me a sincere message of thanks and appreciation. It made the effort well worth it. Then I broke down and cried. Hahahahaha! Photos by Tweetie de Leon-Gonzalez. To read Stylebible.ph’s related story on the tournament, click here.

Celebrity Squash Tournament Tweetiegonzalez
Your Guide to Thriving in This Strange New World
Staying
In? What to watch, what to eat, and where to shop from home
OR
Heading
Out? What you need to know to stay safe when heading out