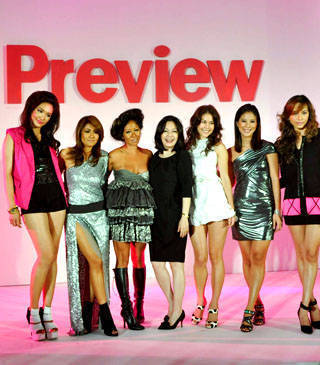 Say what you will about that 11-inch plastic doll with a bountiful rack and an impossibly miniscule waistline causing Body Dysmorphic Disorder in very young girls, but Barbie the doll is still one of the biggest style icons of the century, and don't the fashion magazines know it.

Preview magazine's 14th Anniversary celebration paid homage to Barbie and her 50th birthday (with nary a wrinkle to show for it on her plastic face) by mandating a Barbie-inspired dress code for this year's Preview Best-Dressed Ball, held Friday at White Space in Makati.

Seen and heard at the bash:

* Alabaster-skinned Maricel Soriano, who graces Preview's July cover, breezed in and out with not even enough time to pose for a solo photo. She held her own in a black Lanvin dress with 3/4 sleeves that made her stand out in a sea of girls almost half her age donning hemline lengths half that of Soriano's below-the-knee dress.

*Preview party correspondent Raymond Gutierrez was there without his twin Richard, who is suing Summit Media website pep.ph for P25 million. Raymond is a close friend of Preview fashion editor Liz Uy, who is the ex of John Lloyd Cruz, who is rumored to be seeing Ruffa Gutierrez, who is the sister of Raymond.