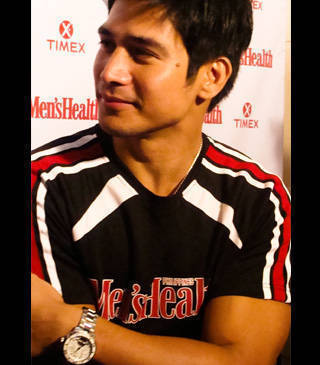 Piolo Pascual on cheating, hot baths, and KC being

SPOT.ph got close to the Men’s Health January cover guy. PLUS! See him in his AMAZING AB glory in the behind-the-scenes cover shoot VIDEO. 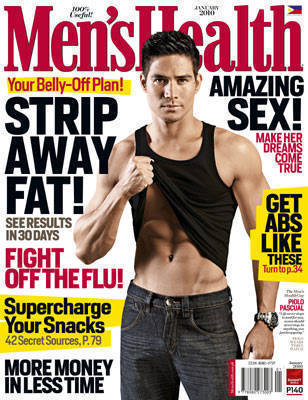 Men’s Health (MH) magazine welcomes 2010 with a Fight Club-inspired cover featuring multi-awarded actor and singer, Piolo Pascual. The clean-cut heartthrob admits that the shoot intimidated him: "It’s hard to do something so different; also, for us boys, Fight Club is so iconic." He had about three weeks to prepare for the shoot, but being in the habit of working out almost every day certainly came in handy.

It’s Pascual’s first time on the cover of MH but editor-in-chief Agu Paiso says the actor had been on their short list for quite some time, it was just that conflicting schedules got in the way. "Piolo was wonderful to work with. It was a really smooth shoot, no complaints whatsoever. The day we shot him, he had four shoots and we were lucky enough to be the first one. Pinagod namin siya, pinahirapan namin siya before the rest of his shoots. (laughs)"

Behind the scenes of the Men’s Health cover shoot

SPOT.ph caught up with Pascual for an exclusive interview about cheating, bathtubs and nuts:

1. He cheats. He works out every day but he also has cheat days. "Every time I feel deprived especially when I’m puyat, I binge on sweets, halo-halo or cakes. This happens twice or thrice a week." But, Pascual adds, "I’ve always been a safe eater. I eat what I want to eat but I don’t go for beef, pork and rice."

2. He’s a chest guy. When he doesn’t work out for a week, his chest "shrinks right away." Pascual says, "[My chest is] the most underdeveloped part of my body. I think I got it from my dad. I work doubly hard for it." He’s also working on his legs through spin classes and running. 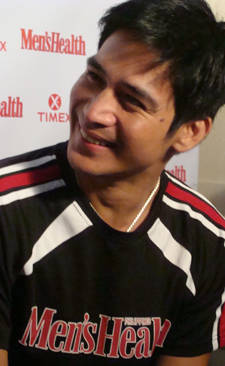 3. He has a thing for nuts. "I love peanuts. I love nuts. I try to avoid it but every chance I get like when I see nuts on the street, I [buy]. Especially during vacation[s], I munch on nuts."

4. He likes long, hot baths just before performing. "I go to a sauna or I try to bathe in a bathtub just to really relax. I also work out first thing in the morning to prep my vocal cords."

Piolo Pascual talks about his relationship with KC Concepcion

5. He doesn’t "kiss and tell." Round after round of press people asked Pascual about the real score between him and his Lovers in Paris (and rumored off-screen) partner, KC Concepcion, but Pascual didn’t budge. "KC and I are okay. Our respect and trust for each other grew. I don’t think I’m in a position to share about it. If there’s anything, and I’m not saying there is, [let’s just enjoy what we have]. Our relationship is better now because there’s no more pressure. [Now that Lovers in Paris is over, people won’t say] we’re just playing it up for the press, for promotion." Pascual remained mum about where and whom he spent his holidays with, but he revealed Concepcion’s Christmas gift for him: "stuff" that he could use for his hobby, diving.

6. Former onscreen partner KC Concepcion is "definitely" safe with him. Concepcion’s megastar mother, Sharon Cuneta told PhilStar.com, "KC is safe with him." To this, Pascual says, "Oh, that’s nice. Yes, definitely because hindi ako mambabastos ng tao and I won’t violate whatever trust her parents gave me. I’m grateful for that."

7. "You’ve Lost That Loving Feeling" almost made him cry. For his new album Decades, Pascual recorded the song, which he recalled was part of Top Gun’s soundtrack. "I never thought it was an emotional song, but when I recorded it, I realized it’s a heartbreaking song. I almost cried after recording it because I was full of emotion." He also found it difficult to record "Can’t Take My Eyes Off You" since it has "[a lot of high notes] and changes from a slow to upbeat melody." 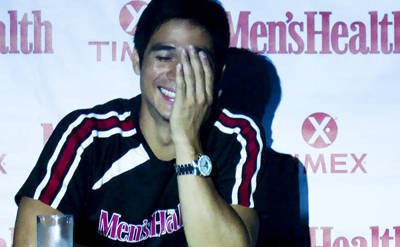 8. He "wants to remain apolitical." Though he’s portraying the iconic late Sen. Benigno "Ninoy" Aquino, father of presidential candidate Noynoy Aquino, in an upcoming Maalaala Mo Kaya episode, he is not endorsing any of the candidates for the May elections. "I just want to be able to observe... Even my mom feels that it’s the right thing to do," he told ABS-CBN’s Ginger Conejero.

9. The gym is his playground. "When I’m in the gym, I’m more relaxed. It starts my day right. It’s part of my lifestyle already so I don’t need to force myself to go to the gym." Pascual has been going to the same gym for over five years now; he works out with a personal trainer.

10. He wouldn’t change a thing even if he could. "Everything [has] happened for a reason and I wouldn’t be where and what I am today if not for the things I went through, so I guess it all fell into place. I just have to live with that."

Sharon Cuneta Kc Concepcion Piolo Pascual Men’s Health
Your Guide to Thriving in This Strange New World
Staying
In? What to watch, what to eat, and where to shop from home
OR
Heading
Out? What you need to know to stay safe when heading out