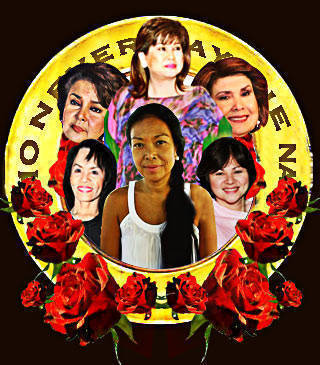 SPOT.ph rounds up 10 famous moms who would do anything for their kids, right or wrong.

They say a mother’s love is the purest love of all. Admittedly, there are moms who express their love in the most over-the-top ways-they won’t hesitate to go against the establishment, break the law, or inadvertently make fools of themselves, all the name of maternal protection. Their children, on the other hand, just laugh off their antics or cringe in shame. Some may even enjoy the motherly attention and indulge the crazy mommy antics.

Whether or not we approve of these women’s mothering techniques is beside the point. Right or wrong, perhaps they just really love their kids. SPOT.ph lists 10 of the most devoted-and baffling-moms in recent memory:

Motherhood statement: "I want everyone to know that no matter what my son did, I love him with all my heart and soul," cried Aguilar-Pollard to the media after son Jason was hurt in a shootout, arrested, and brought to the hospital on January 18, 2010.

Mommy logic: An artist-author and self-proclaimed free spirit, Aguilar-Pollard reveals in one of the essays on her website that she had a very difficult childhood. Her father reportedly applied liberal corporal punishment to her and her siblings (one of which included pop icon Freddie Aguilar). She asked, "What happens to a child who is betrayed by a parent at a young age?" This is probably why Aguilar-Pollard chose to stand by her man-child even when he’s alleged to be responsible for the death of two people.

Stage mama moments: After son Jason was declared a fugitive, Aguilar-Pollard tried her best to mislead the authorities, saying that he was already in Hawaii. All the while, Jason was hidden in a specially-built storeroom in the basement of their home in Blue Ridge, Quezon City. In the aftermath, Aguilar-Pollard presented Jason’s unreleased rap album, JSin in the Philippines.

Nanay verdict: Aguilar-Pollard seems to have some serious issues that can only be resolved by time and professional help. The hand that rocks the cradle may rule the world, but that hand has to know when to put a stop to a child’s descent into a life of crime.

Mommy logic: As one of the lesser-known bomba starlets in the early 1970s, Rama knows just how cutthroat the movie industry can be. This is why she’s fiercer than a Tyrannosaurus Rex when it comes to protecting her children’s interests. When she fires off barbs in her thick Bisaya accent-you know she means business.

Stage mama moments: Rama does not hesitate to make a scene when she wants to protect her offspring. In the 1990s, when teenage Ruffa wanted to run away with then-boyfriend Dennis da Silva, Rama called the police and threatened to file kidnapping charges against her daughter’s beloved. Then, when she felt that son Richard didn’t get his fair share of star treatment at the 2008 Bench Blackout event, Rama lambasted Bench. The following year, Rama engaged in a verbal catfight with GMA Network’s Wilma Galvante.

Nanay verdict: Though Rama may be mostly bark, one should get out of her way when she’s on the warpath. Sticks and stones may break bones, but mama Rama’s words can be painful enough to kill you with shame. To be fair, Rama’s tenacious devotion to her children seems to have, for the most part, paid off. Her children are clearly grateful to have her on their side-but they’re understandably out of the picture when she’s on yet another warpath.

Mommy logic: Kho seems to have led a sheltered life where all things are true, good, and beautiful. Therefore, she simply refuses to believe that son Hayden can do any harm.

Stage mama moments: Kho’s overzealous defense of son Hayden lead to more troubles for him, as he was called in by the Philippine Drug Enforcement Agency to submit to a drug test. Halili also sued Kho for libel.

Nanay verdict: Kho’s mothering is fueled by her powerful denial of negative things. If only she just said, "No comment." Sometimes, yes, words just get in the way.

Motherhood statement: At the end of 2009, Fuentes was exasperated by her daughter Liezl’s post-cancer scare testimonial, where she told TV host Kris Aquino that it was Pops Fernandez who saved her life. Shortly thereafter, Fuentes told the press, "She talked about how she owes Pops Fernandez her life. Grabe naman yata ’yun. She owes Pops Fernandez her life? Ano na lang ako sa buhay niya? I raised her like a princess, alone, by my lonesome fat self. Ang tatay niya [former matinee idol Romeo Vasquez], nawala sa buhay niya when she was two and a half years old."

Mommy logic: Formerly a big star, Fuentes continues to be a larger-than-life character who does not tolerate BS from anyone-not even her beloved only child. Despite Liezl’s precarious health, Fuentes let it rip.

Stage mama moments: Nobody can blame Fuentes for hovering over her only child for most of the latter’s life. She was, of course, disappointed when, decades ago, Liezl eloped with actor Albert Martinez. Fuentes’ and her daughter’s love-hate relationship has long been fodder for tabloid news.

Nanay verdict: Hell hath no fury like Amalia scorned! Fuentes as a mom is, to say the least, an acquired taste. She talks tough and she can back it up, too.

Claim to motherly fame: Talent manager who functions as a surrogate mom for many local talents

Mommy logic: Solis takes her job as "second mother" to her wards very seriously. She’s probably willing to beg, cheat, or steal for them.

Stage mama moments: In 1994, Solis allegedly engineered the infamous Manila Film Festival Scam to secure the Best Actor honors for her then-ward Gabby Concepcion. She has gotten embroiled in many smackdowns in the name of her talents since then, but the scam remains the most fascinating evidence of how far she will go to show her motherly love.

Nanay verdict: Solis makes things happen for her so-called adopted children. She’s not called "Nanay Lolit" for nothing. It’s great to have her on your side. But you better run for cover when she isn’t.

Claim to motherly fame: Mother of Onyok and Grace

Mommy logic: A high school dropout who went on to become a teenage mom and, later, a sex symbol, Roces believes in living life on her own terms. She didn’t condemn her own children for becoming teenage parents. To date, both Grace and Onyok are in the process of settling down with their own families.

Stage mama moments: Though daughter Grace didn’t exactly get into showbiz, her untimely and controversial entanglement with Jolo Revilla ensured that Roces would be making more of her trademark tactless pronouncements. In fact, Roces expressed her feelings for the Revilla family quite frankly on several occasions.

Nanay verdict: Looks like Roces is clearly not a fan of discipline. "Normal" doesn’t seem to be in her personal dictionary. She’s one hotheaded mama you don’t want to mess with.

Mommy logic: Being with daughter Angelica seems to be Jones’ main preoccupation, but it appears that she is not content to live the showbiz life vicariously. Thus, there’s no issue that’s above or beneath her, she takes on all of them for the sake of her daughter.

Stage mama moments: Always ready to give statements about Angelica’s controversial love life, Jones has also reportedly stirred up controversy involving her daughter’s colleagues. When Angelica lost in Shall We Dance?, Jones was ready to rumble.

Nanay verdict: Jones may mean well-but she just comes off as mean to other people. Meanwhile, Angelica seems to be enjoying her protectiveness. Jones is a mom who puts bodyguards to shame.

Mommy logic: A former bit player, Cariño hooked up with politician Roy Padilla Sr. (a Camarines Norte governor who was assassinated in 1988) and had to put up with the fact that he already had a family. For the most part, Cariño had to be a single parent to her eight kids.

Stage mama moments: Cariño has stood by her sons through their numerous scrapes with the law and other baffling antics. Though she didn’t really get to say much when son Royette was part of a paramilitary cult, she was vocal when son Rustom metamorphosed into Bebe Gandanghari. She adamantly declared, "Para sa akin si Rustom pa rin siya, ’yun lang."

Nanay verdict: The fact that it’s just her sons who caused her much grief is a testimony to the fact that Cariño is a sucker for bad boys. She fell in love with one and gave birth to four of them, one of which who now prefers to be called a daughter.

Mommy logic: A graduate from the school of hard knocks, Pacquiao single-handedly raised her brood of six after she was abandoned by her two husbands. Nothing fazes Pacquiao, who spent years as a laborer at the General Santos City public market.

Stage mama moments: A devout Catholic, Pacquiao, draped in jewels, is often caught on camera praying for Pacman’s victory during his matches. Perhaps hoping to recapture her lost youth, Pacquiao’s 60th birthday party had a curious debut theme. Pacquiao has also become a showbiz personality-appearing in a movie, an ad, and various TV shows.

Nanay verdict: Pacquiao proves that life can get better as you grow older. It doesn’t hurt if you have a devoted son who’s one of the world’s richest athletes who’s ready to buy you a mansion and everything else you can wish for. Pacquiao’s story should convince all mothers to be kind to their kids.

Motherhood statement: In 2007, when daughter Danita ran away from home (which she referred to as "hell") and accused her of being a control freak, Romualdez appeared on The Buzz and gave this response: "Ako yata ang nasa impyerno dahil napakasama nang ugali mo. Alangan namang anak ang masusunod. S’yempre nanay."

Mommy logic: A former actress who started out in wholesome flicks in the 1950s, Romualdez’s overprotective nature stems from her firsthand brush with the movie industry.

Stage mama moments: Daughters Kristina and Danita have both rebelled against Romualdez’s iron hand by running away from home. In both instances, Romualdez came out to defend herself and to put her daughters in their place. Her tiff with Kristina is not documented online, but her spat with Danita is. To date, Romualdez has reconciled with Kristina. As for Danita, the tweets on her Twitter page reveal that she’s happy and still singing in gigs.

Nanay verdict: Romualdez seems to be only doing what she thinks is best for her kids. But sometimes, it appears that she overdoes it. The ties that bind can easily choke, too.