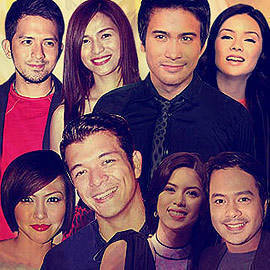 Are They Or Aren’t They? 10 Latest Hot Celebrity Hookups

John Lloyd finally admits he and Shaina Magdayao are a couple. How about Paolo Basa and Divine Lee? Sam Milby and Marie Digby? Robin and Mariel? Spot spots those spotted together here. 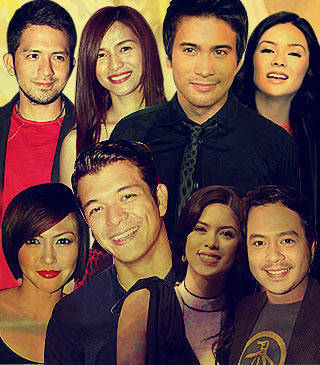 Define "hook up" in the year 2010: Anything from simply hanging out to dating and beyond. When celebrities hook up with non-showbiz people, it’s newsworthy because of the celebrities or the circumstances at the time of the hook up. But when a star hooks up with a fellow star, they draw supernova-like attention because of their combined star wattage, even if the hook-up is just a rumor. SPOT.ph lists down 10 of the latest hot celeb hook-ups--some verified, others yet to be confirmed, and a couple outright denied yet still making headlines.

From Wowowee to Palibhasa Sikat: Mabin-that’s their moniker that even has a Facebook page put up by fans. Though both action star Robin Padilla and host Mariel Rodriguez have repeatedly denied any romance between them, the gossip has not died down. The rumors started with Padilla’s temporary hosting stint on Wowowee which Rodriguez co-hosts, and it looks like it’s not going to end soon with the pair starring in Padilla’s first ABS-CBN sitcom, Palibhasa Sikat. According to Manila Bulletin, ABS-CBN executives were "reportedly unanimous in their choice of Rodriguez as Padilla’s love interest."

"No third party." Padilla has been divorced for years, while Rodriguez announced on Entertainment Live on May 29 that she and three-year boyfriend, actor-host Zanjoe Marudo, have called it quits. Marudo, however, told PEP.ph the day after, "Hindi ko naman masasabing wala na kami. Mayroon lang kaming mga inaayos na mga personal na bagay." Addressing rumors of Padilla as the third party, Rodriguez said it was unfair to Padilla. Her relationship with Marudo became rocky after their Asian cruise in April, two weeks before Padilla hosted Wowowee, she said on Entertainment Live as reported by ABS-CBNNews.com.

Busted by Padilla’s daughter? And the story gets juicier. Padilla’s daughter Queenie hinted Padilla is dating these days, reports ABS-CBNNews.com. She is not sure if it’s Rodriguez that he is dating but she said her father has rarely gone home since he met Rodriguez. If ever Padilla and Rodriguez do decide to take their relationship to the next level, they have Queenie’s blessing. "Basta alagaan po niya si Papa at huwag po siyang lokohin."

Are they or aren’t they? John Lloyd Cruz has finally admitted that he and Shaina Magdayao are a couple. He told Boy Abunda on The Buzz on June 20, "Matagal ko nang hinihintay ito! Once and for all, gusto ko sabihin at sagutin na, yes, it’s us." The two managed to keep whatever had been going on between them private for months, despite sightings and photos of the two surfacing everywhere. Cruz told Abunda, "I wanted to come out and once and for all say something kasi ang dami nang nag-take advantage sa pagtahimik ko. Hindi na maganda kasi marami nang taong nadadamay and marami na ang taong nasasaktan. Hindi na nakakatuwa."

Sam Milby talks about his Boracay trip with Marie Digby. (6:23)

The Meet Cute: Sparks flew between actor-singer Sam Milby and Youtube singing sensation Marie Digby in 140 characters or less. It was Milby who first followed Digby on Twitter and then she followed him back, he told PEP.ph on June 8. Later on, they started sending direct messages on Twitter. Milby also mentioned host-singer-actress KC Concepcion as their common link.

The Eyeball: They have only dated twice; one was around Milby’s birthday in May. "[Marie] was in Japan and she wanted to visit the Philippines and it happened to be around my birthday," he told PEP.ph. Luckily, he had two days off from work. They stayed in Boracay for one day in the same place but in separate rooms, he clarified contrary to the rumors. He also brought her to Antonio’s in Tagaytay. "Marie is one of the nicest people that I’ve ever met. She’s really pure-hearted," he said.

Privacy Plea: Actress-host Anne Curtis and French-Filipino entrepreneur Erwan Heussaff have been linked to each other since last year, with photos popping up all over the internet. In a June 2009 report by PEP.ph, Curtis said, "I’m not comfortable talking about it yet. We’re just getting to know [each other]... Right now, I’m open to dating and I’m happy. That’s what matters."

Picture Perfect: Word on the street was that the two actors spent the past Holy Week in Cebu but it was actually in Hong Kong that they were seen and photographed strolling while holding hands. Before the photos came out, Mercado said she spent Holy Week at home with her son, Alex Jazz, reports PEP.ph. Trillo declined to share where he spent the holidays. Cornered by the media not long after the photos came out, the couple admitted they are exclusively dating. Both single parents, they said they frequently talk about their kids and share parenting tips.

The rumors linking them "triggered an improvement in the ratings" of their show, wrote Ricky Calderon of The Philippine Star. Calderon added that the show "was somewhat struggling in the ratings" before the couple’s Hong Kong photo came out.

I do? In February, their "married" Facebook statuses caused a stir that Herras waved off. He told Showbiz Central as reported by PEP.ph, "Once nag-iba ka ng status, marami nagre-react. Masarap lang basahin mga comments ng mga tao!" Herras told PEP.ph in June that he is not ready to get married yet since he still has a lot of projects. He would get married when he already has a mansion, he joked.

Is it in the bag? Actors Jake Cuenca and Melissa Ricks, who both have different reel love interests, have been linked for months but they’ve kept the public guessing. After being seen in group dates and at church, rumors escalated when Cuenca allegedly gave Ricks a purple Balenciaga bag worth P100,000 for Valentine’s Day. Cuenca told PEP.ph, "Tanungin mo na lang siya about that. Nakapag-usap naman kami noong Valentine’s Day. We didn’t go out. I was very busy that day; she was very busy din. Melissa is and always will be very special to me."

The Breaking Point: Before they even admitted to being together, rumors of a breakup already surfaced in May. A few speculated reasons popped up according to a report by PEP.ph: Ricks’s mom’s non-approval of Cuenca, Ricks’s jealousy over Cuenca’s love team partner Sam Pinto, and Cuenca’s alleged physical fight with ex-girlfriend Roxanne Guinoo. Cuenca denied they broke up and said they have "an understanding." Both are focused on their projects but Cuenca told PEP.ph, "Sa akin, if ever she dates someone, siyempre masakit sa akin 'yun. Kung ako naman ang may ibang i-date, alam ko na may masasaktan din akong tao."

Private Lives: Actor-singer Jericho Rosales told The Philippine Star he met Francesca "Cesca" Litton, SNN reporter and U92 radio host, on November 2009. PEP.ph reported in March that the two were spotted together a bunch of times. Asked for a comment, Rosales told PEP.ph he wants to keep his personal life private. "I also want to respect the family of whoever is involved with me, especially if they’re not from show business." He added, "I can say that someone is making me happy."

The Big Reveal: In a June interview with PEP.ph, Rosales admitted he and Litton are exclusively dating. "You can put whatever you want, but I’m just exclusively dating one girl." But in March, The Philippine Star quoted him as calling Litton his girlfriend.

Recent Development: The couple was spotted at the June 3 launch of the 15th French Film Festival, which Litton hosted. Her co-host, French Embassy Audiovisual Attaché Martin Macalintal, mentioned onstage that Rosales escorted her to the event. Tweeted a link to an article about her and Rosales on June 9, Litton replied, "No comment. Hahaha!"

Caught red-handed? Wowowee host Carmen Soo and director Lino Cayetano were reportedly seen holding hands while jogging at the University of the Philippines a few months ago, according to Manila Bulletin. They allegedly put some distance between them when people stared. Soo told SNN they are just friends. "Yeah, I was running, exercising. He’s a nice guy, very intelligent, very unassuming."

"I understand that being in this industry, you can’t escape being seen with one man even in a group. It’s so easy to point fingers to say that something is going on. It’s unavoidable. I think people should understand that I am new in this business. I’m trying to make good friends," she added.

Movie date? Soo and Cayetano went together to the special screening of Noy on June 2, fanning the speculations once again. Asked if they are dating now, Soo told ABS-CBNNews.com, "No answer." 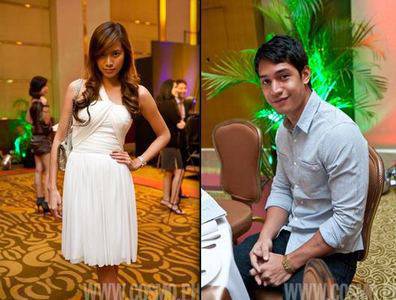 Are they or are they not? Real estate heiress Divine Lee and model Victor Basa have a bunch of photos with their friends on nights out, as seen in Lee’s Tweet Photos. But a Facebook profile photo added by Lee on June 7 features just the two of them. Her Facebook friends commented on the photo, calling them a "wonderful couple" and "such a cute couple."

On June 13, showbiz writer Darla Sauler uploaded a photo showing them holding hands supposedly in New York. The pair went to New York with friends a few weeks ago, as seen in their tweets and tweet photos, but it is uncertain if the photo from Sauler was taken during that trip.