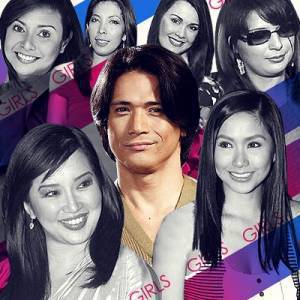 Robin Padilla was dubbed as "The Bad Boy of Philippine Movies" following the success of his action flicks in 1989--Carnap King and Hindi Pahuhuli ng Buhay. Aside from his films, he was also known as a ladies’ man. Based on his relationship track record, Robin is one man whose appeal cuts across a broad spectrum of ladies who couldn’t resist his charm. SPOT.ph lists 10 women who have been involved with or linked to the Bad Boy.

All in all, Robin and Liezl were together for 20 years.

Robin and Liezl got together when they were just in their teens--way before he joined the movies. Liezl stood by Robin even after he was sentenced to jail for illegal possession of firearms in 1994. Robin then converted to Islam while he was behind bars. In 1996, he and Liezl finally got married. Robin, who was pardoned by then-President Fidel V. Ramos, got out of jail in 1998. Liezl seemed like the "rock" in Robin’s tempestuous life. She was literally with him for better or for worse. Alas, in late 2009, Robin revealed that he and Liezl have been divorced since 2007. Liezl, who is now based in Australia, reportedly has a new man in her life. In any case, she and Robin will always be connected because of their four children: daughters Queenie, 18, and Kylie, 16, Zhen-Zhen, 14, and son Ali, 10.

Jobelle lost her bid to be Makati’s vice mayor in this year’s elections.

Jobelle, who is a member of a Philippine showbiz clan, started making a name for herself when she was cast in 1984’s Bagets. She was Robin’s leading lady in the 1989 action flick Carnap King. The two have a 19-year-old son named Jeremiah Joseph Leroy Salvador, nicknamed Mico. Jobelle went on to work in Japan for 10 years. There, she had a relationship with a Japanese businessman and had a daughter by him. Now back in the country with daughter Julynna, Jobelle now runs an events and promotions company. Meanwhile, according to Jobelle, Mico has moved to Las Vegas to be with his maternal grandmother.

Leah Orosa in 1992’s Alabang Girls. (She’s in the sparkly blue costume in the dance sequence and the solid red top in the seaside dock sequence.)

Leah was Robin’s leading lady in 1990’s Sa Diyos Lang Ako Sususko. Everyone was stunned when they found out that the mestiza beauty was pregnant with Robin’s child. Leah is now married to Antonio Garcia, with whom she has four children. They are now based in the US. Camille, Leah’s daughter with Robin, stays with them.

The public went gaga went when Dolly Anne, the daughter of Pinoy showbiz icon Inday Badiday, revealed that she had hooked up with Robin. While Robin was mum about the issue, Dolly Anne has been more forthcoming. In an article by showbiz writer Chit Ramos, Dolly Anne was asked what is was like to be with Robin. She replied, "Kailangan pa bang itanong ’yon? Marami namang nakarelasyon niya ang nagsasabi ng sinabi ko. Tinatrato [kang] reyna, iyon ’yon." When asked to elaborate, Dolly Anne revealed that Robin was a tireless lover.

Robin was one of Sharon’s special guests in her 2008 concert.

Robin and Sharon hooked up on the set of 1991’s Maging Sino Ka Man. They were more like two giddy teenagers, as he playfully called her "Ma’am." In an interview with Boy Abunda on SNN, Sharon revealed that she and Robin called each other "kambal" (twin). "We could finish each other’s sentences," she recalled.

Robin and Vina reportedly got drawn to each other on the set of 1992’s Miss na Miss Kita: Ang Utol Kong Hoodlum 2. Vina’s family probably got scared over the hookup, as Robin had acquired a reputation as a reckless womanizer by then.

What would have happened if Ruffa had eloped with Robin?

Robin and Ruffa got close on the set of Lab Kita...Bilib Ka Ba? (1994). Unfortunately, there were several obstacles that kept them from getting any closer. For starters, Ruffa’s mom Anabelle Rama wasn’t exactly into Robin. That was also the same year that Robin got arrested. Still, rumor had it that he had gone as far as proposing to Ruffa.

Kris was 18 when Robin, then in his early 20s, became her boyfriend. Rumor had it that the two had planned to elope. They eventually broke up because Robin was still in his "unstable" stage back then. In 2003, Kris and Robin made a movie whose title described their former relationship, You and Me Against the World. They’re now co-hosts of ABS-CBN’s new noontime show Pilipinas Win na Win

When Robin and Judy Ann starred in the ABS-CBN action-drama teleserye Basta’t Kasama Kita, which aired in 2003, it wasn’t long before they were rumored to be together. However, showbiz pundits who were sympathetic to Judy Ann’s plight, said there was nothing going on between them. In fact, Boy Abunda wrote in his Philippine Star column: "Judy Ann Santos is being forcibly dragged into the marital imbroglio of Robin Padilla and wife Liezel Sicangco, now based in Queensland, Australia with their four children. This is grossly unfair for Juday, who to my mind is one of the most hardworking actors in showbiz."

Have Robin and Mariel sealed the deal?

The buzz about the Mariel-Robin pairing started with Robin’s temporary hosting stint on Wowowee, where Mariel was one of the co-hosts. Soon after, Mariel admitted to going out on a date with Robin. She was then spotted with him at his daughter Queenie’s surprise birthday party last month. Just recently, Robin admitted on national TV that he loved Mariel and that he would marry her. To prove that he was serious, he also gave her a P1.2-M diamond ring. Mariel may very well be the luckiest girl that Robin has hooked up with since his head is now in the right place. Right now, their 17-year age gap seems negligible.