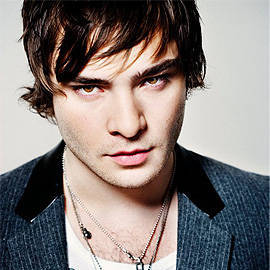 You Know You Love Him: Ed Westwick Charms Manila

The newest Penshoppe endorser on the joys of playing Chuck Bass, what else he’s good at, what will make him return to Manila plus top must-watch <em>Gossip Girl</em> moments. 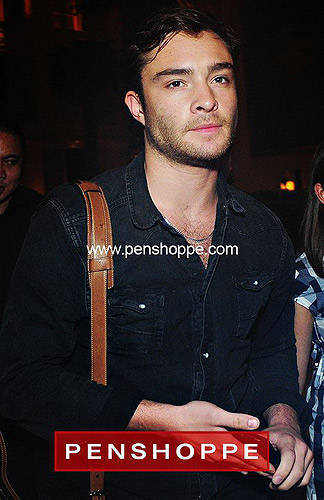 If you think Chuck Bass is a charmer on the hit American TV series Gossip Girl, wait ’til you meet the man behind the villain we all love to, well, love.  Ed Westwick, also known as the hit show’s resident bad boy and now the new poster boy for Penshoppe, arrived in Manila on May 31 for the local clothing brand’s 25th anniversary campaign photo shoot.

Perhaps to evoke true Upper East Side fashion, the press-con-slash-chat-with-Chuck party was held at the swanky Salon de Ning on June 2 at the Peninsula Manila. The British actor and former frontman of indie punk rock band The Filthy Youth regaled members of the press with the same devilishly-sexy swagger his Gossip Girl character is known for, and an eargasmic English accent that the 23-year-old actor masks on the show.

Fresh from his Penshoppe shoot the day before, Westwick sat down with the media and shared his thoughts on his alter-ego Chuck Bass, his first-ever Manila visit, what he thinks about Filipino women, and more. Oh, and he gave us a sample of that signature Chuck Bass voice, too. 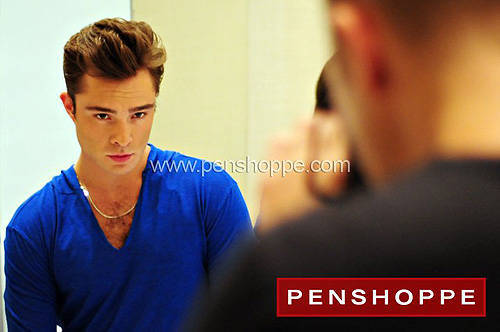 Chuck ditched the bow tie for this Penshoppe shoot.

On his similarities and differences with his character on the hit show Gossip Girl, Chuck Bass:

"We’re both male. We both look alike, which is very strange, isn’t it? But no, we’re actually very different. He’s such an amazing character to play, so much fun, and I have a great time working with the all the people working in the show, but I live quite a different life I’m afraid to say. I don’t ride the limousine quite often.

But one thing he will never have on me is this English charm. He’s got that American charm, but he doesn’t have the English charm, you know."

On his other talents:

"Well I play a bit of the guitar. Recently I’m trying to learn how to play the spoons though I’m not that good yet. Really, I’m good at football, there you go. And that’s about it. I’m good at sleeping as well."

On his new film project Romeo and Juliet where plays Tybalt:

"Yeah [I’m] really excited. We got a really, really great script. It's keeping the traditional flow of the Shakespeare traditional language but it’s more accessible to a contemporary generation. And yeah, it’s going to be fantastic. Hailee Steinfeld is playing Juliet-very talented actress-and I get to play the wonderful role of Tybalt, the cousin of Juliet. It’s going to be an amazing time. We’re going to shoot in Verona...We’ll get to bring probably the most famous story of all time back to life."

"This is my first time in the Philippines and I have to say [it’s been] really good because everyone’s made me feel really, really welcome...I was feeling a little jetlagged until I came out here and there are lots of bright lights and lots of people so now I’m wide awake. It’s been a very, very good trip. Every thing’s gone really, really well. We had a great time during the shoot yesterday. That was fantastic. Everybody involved in Penshoppe has been amazing. And then today I went out on a boat around Manila Bay. I went to take a look at the Manila skyline. You have a beautiful city here, a beautiful country, and beautiful, fantastic people."

On how he finds Filipino women:

"Well, I haven’t found any yet. In general, everbody I got to meet has been fantastic, but the Filipino women, they seem to have quite an attractive look I have to say. It’s one of the reasons why I’m coming back."

Ed Westwick Edwestwickinmanila Chuckbass Chuckbassinmanila Edwestwickforpenshoppe Edwestwickpenshoppecampaign Gossipgirl Edwestwickofgossipgirl Chuckbassofgossipgirl Ed Westwick Charms Manila
Your Guide to Thriving in This Strange New World
Staying
In? What to watch, what to eat, and where to shop from home
OR
Heading
Out? What you need to know to stay safe when heading out