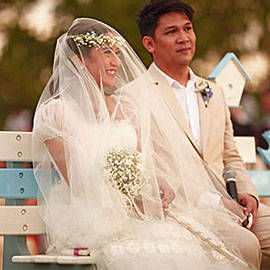 You've seen the pre-nup, now check out their wedding photos. 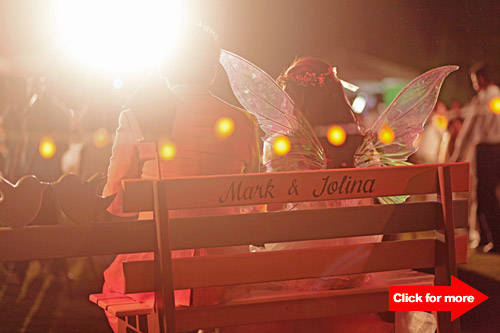 To see more of this couple, click for more.

(SPOT.ph) When ’90s pop idol Jolina Magdangal announced her engagement to Rivermaya drummer Mark Escueta in June 2011, we waited to see how her trademark whimsical style would translate into her dream wedding.

With flowers in her hair and a simple hippie-inspired gown, Magdangal married Escueta on November 21 in an elaborate production at Splendido Golf and Country Club, Tagaytay. Two days earlier, the two had an intimate ceremony at the Madre de Dios Chapel, Tagaytay, attended only by their family and closest friends.

The formal affair was a garden setup styled hippie-Bohemian, showing bits of Jolina's quirky touch-lacy wedges for shoes, handmade invitations (a scrapbook painstakingly crafted by the couple and Printsonalities). For the reception, Magdangal traded her veil for an exquisite pair of iridescent fairy wings bought especially for her by the groom.

Jolina Magdangal Markescueta Wedding Mangored Splendidotagaytay
Your Guide to Thriving in This Strange New World
Staying
In? What to watch, what to eat, and where to shop from home
OR
Heading
Out? What you need to know to stay safe when heading out