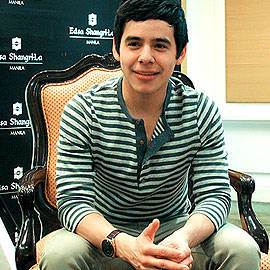 David Archuleta gears up for Nandito Ako, his TV5 mini-serye

The AI star talks about his new primetime role, taking a sabbatical, and why it’s more fun in the Philippines.

(SPOT.ph) January has been a starry month for the Philippines, so far. After the much-hyped Bourne Legacy filming on Leveriza Street, another international celebrity has landed on our shores, one who needs little introduction. 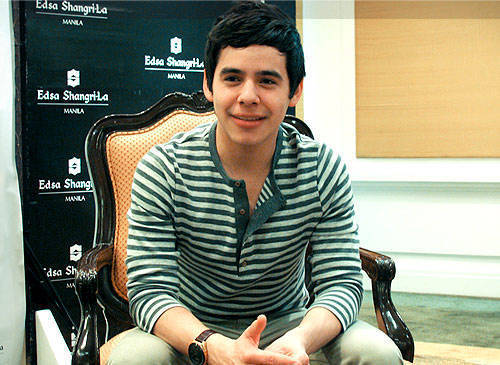 David Archuleta, who has been to the Philippines three times prior to this latest visit, arrived in Manila on Friday morning, January 13 and made a beeline for a press conference shortly after landing. But don’t go looking for tickets to his concert. The 21-year-old crooner is here for an entirely different project, something that requires minimal singing. Archuleta is set to star in the latest TV5 mini-serye Nandito Ako with Jasmine Curtis and Eula Caballero.

The American Idol alum will play Josh, a Filipino-American singer who returns to his native country. Apart from singing the eponymous Filipino theme song, Archuleta is slated to shoot in the Philippines for an intense three weeks. The program is one of his final commitments before taking a sabbatical from the public eye to fulfill a two-year proselytizing mission for his church.

SPOT.ph sat down with the newest TV5 star as he talked about acting, becoming more mature, and why it’s more fun in the Philippines.

On preparing for his first main acting gig:

"I sort of took (a class) in New York before I came over here. It wasn’t exactly like a class... The lady that I worked with was great. She helped me kind of loosen up. It made me look forward to doing this and that it’ll be fun."

"She just really taught me (that) instead of  how people sometimes get caught in reading the lines, saying the lines, and acting out the lines, she focused on how I could relate to what the words were even if it wasn’t me. For the most part the character I’m playing is very much me which is nice but there are parts where you have to pretend. So how can you still put yourself in there? How can you still connect? She was great at teaching me to find exercises on how to do that."

On what kind of drama we’ll expect from him:

On the actor he looks up to:

"I guess Johnny Depp. Just because it was interesting to see how he was in interviews, talking, and just the kind of person he tended to be, and then seeing how he got into character when it was time to act."

On whether he’s going for a more mature image now that he’s 21:

"I guess? I don’t know if I’m ever going to mature. Ha ha ha. I feel like I’m never going to grow up, to be honest, but we’ll see. Whatever happens naturally, that’s what I keep thinking."

On who he wants to collaborate with in the future:

"I would love to collaborate with Natalie Cole because for me she’s like a legend. She was such a huge inspiration to me. You know, a lot of the inspirations I grew up with, they may not be alive anymore, but she’s one of those people, who, for me is a living legend so I would love to get a chance to do something with her. For some reason, when I was 11 years old, I just loved Natalie Cole. And her dad was Nat King Cole, too."

"You never know. I never saw myself doing that but just like anything, it opens a door. Let’s see what comes. It’s interesting to see what my thoughts are on acting after this experience because this will be my first. I did do iCarly and Hannah Montana but it was really short, very brief. I just had to be myself."

On his religious mission:

"It’s very much focused on service-service to people in other communities and being able to change them. It’s also very much about sacrifice. For me, it was very hard because there would be a lot to sacrifice but that was my personal reason why I wanted to go-because of what you sacrifice and what you learn through sacrifice. Not having my family, my career, securer things in my life, I know in a way I will grow a lot which I haven’t been able to, yet. I’m looking forward to it."

On what strikes him most about the Philippines:

"The number one thing in any place is people. That’s always the thing that strikes me; it’s what I remember the most in anywhere I go, especially here in the Philippines. The people here have always been very gracious, very friendly, and just very supportive. Every single time that we’ve come here, it’s always been [a] great and amazing experience."

On why it’s more fun in the Philippines:

"I can say that I’ve always had a blast in the Philippines so it’s fun for me when I come here. It’s great."

David Archuleta Tv5 Acting Nanditoako Jasminecurtis
Your Guide to Thriving in This Strange New World
Staying
In? What to watch, what to eat, and where to shop from home
OR
Heading
Out? What you need to know to stay safe when heading out