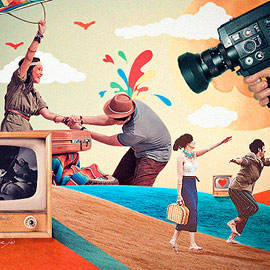 Which wedding teaser made you feel the love? 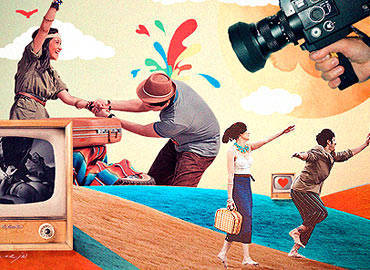 (SPOT.ph)
You didn’t think we’d let the wedding month slip by, did you? Wedding OBBs or prenuptial videos are the latest rage in the wedding industry. Posing stiffly and wackily in a white studio doesn’t quite cut it anymore. Now, there’s a need to dress up (even going as far as hiring fashion and event stylists!), select a breathtaking and usually out-of-town location, and fall in love all over again in front of the camera.

Not falling out of step with the times, we’ve selected celebrity pairs whom we think were most successful in capitalizing on this trend. Romance may be long and short, complicated and breezy, but there’s always a way to squeeze the depth of your love in less than five minutes. Just ask these 10.

Photos by MangoRed and Nelwin Uy; artwork by Warren Espejo

If you could spend one minute looking at Priscilla Mereilles, would you? Comedian John Estrada and his bride went for sweet and (tastefully) sensual in their wedding teaser. The video was shot in black and white (and a few colored reels in between) with well-placed close ups of the Brazilian model’s face.

The choice of score is debatable (it was a bit bow chicka wow wow for our taste), but then again, we sort of tuned out the sound after the first five seconds. A minute just doesn’t seem enough.

When a stony-faced ballplayer willingly hams it up for the camera, we know it’s true love. Crooner Kyla and cager Rich Alvarez have been dating for five years prior to getting hitched late last year, but despite the long-term relationship and their high-profile careers, the pair had been hush hush about their romance.

Their wedding teaser, showing the couple exchange rare moments of public affection on a Batangas beach, was a sweet surprise. The video, while casual and candid, took on a vintage look, a preview to their Old World Glam wedding motif.

Being herself has always been blogger-host (and one-time actress) Patty Laurel’s selling point and that same lovable charm radiates throughout her prenup video with fiance Patrick Filart, who’s equally charming in his own right.

With Up’s "Married Life" blaring in the background, Patty and Patrick’s video is a cute mix of candid moments, quirky antics, and awkward dancing. In Bridalbook.ph, the soon-to-be-bride reveals that the prenup is a prelude to their wedding. "We will be having a small wedding outdoors, away from the hustle and bustle of the metro, so it reflects a similar, laidback, back to nature vibe that we’d like to have for our actual wedding."

In this case, having a friend take your video is an advantage. Nicollo Lopez’s freestyle shooting created an organic and refreshingly "un-stylized" depiction of the Pats’ romance.

While Cheska and Doug’s wedding trailer initially appears to be a video version of their prenuptial photoshoot with MangoRed, award-winning visual storyteller Jason Magbanua, with his usual panache for capturing "moments,"  managed to inject a few candid instances in between, giving its viewers a peek at what it’s like for the couple without the cameras.

A stolen kiss here, a giggle there. While it all seems very sweet, the OBB remains luxe and editorial with Doug looking dapper in strapping suits and his bride in gowns by Jun Escario and Puey Quinones. Well, we never expect anything less than glam from Cheska Garcia.

Yes the Subic backdrop was gorgeous, Geof Gonzales’ and Rabbithole Creatives’ styling flawless, and the photos exquisite, but this wedding teaser is on this list primarily because we believe anything with Kristine Hermosa in it is beautiful.

Oyo, who was quite the hottie himself, and Tin opted for an eclectic blend of vintage, fashion, country, and cosmopolitan backed by Subic’s scenic, war-worn milieu. The teaser is actually a simple rolling montage of the couple’s prenuptial photoshoot taken by Nelwin Uy.

We can’t quite put a finger on Sarah Meier and her now-hubby Banjo Albano’s dreamy save-the-date video. It’s a hodgepodge of goth, emo, fashion, funk, grunge, punk, hipster, hip-hop, and, er, weird, even. Which is it? But the eclectic sum of many opposing parts makes sense, oddly enough. After all, if a high-fashion stylista and an affable events producer can work as well as peanut-butter and jelly, then so can an oversized basketball jersey with a multihued tear-streaked face.

A top model and a photographer? It’s a match made in heaven. For a little over three minutes, Vanessa Matsunaga and Jun Sunga chronicled their love in a "photoshoot-style" teaser complete with heartfelt quotes describing their romance. From its initially sophisticated stance, the video takes a charming turn some time in the middle, showing the couple frolicking and laughing candidly during intimately casual moments. International videographers Mayad Studios did a fantastic job seamlessly merging their high-brow professions with their usual simple, charming selves.

Vanessa and Jun married under a tree in a private ceremony backed by gorgeous Bellarocca, Marinduque on November 30, 2010.

Jolina’s butterfly-embroidered cowboy boots were made for prenups.  Here, the ’90s pop icon traded her kitschy fashion flair for laid-back chic styled by Kat Cruz and Geof Gonzales. She and her groom, Rivermaya drummer Mark Escueta, went on a "sweet escape" as they channeled their inner hippie in this vintage-Boho shoot. The pair were caught openly laughing and frolicking while laying on the beach and flying kites.

Award-winning videographer Bob Nicolas interspersed clips of the couple’s vibrant prenuptial photoshoot with photography duo MangoRed with interviews of Jolina and Mark detailing everything from how they met to his tear-jerking proposal.

No one expected a frisky and fun AVP from a very demure bride and her very earnest groom. But politicians always fall short of expectations. Though this time in a good way.

Their whirlwind romance was captured in a playful two-minuter set in a studio and livened with props in an almost caricaturish fashion. While the relationship was far from a fairytale, the narration in the background still made us go all out "Aww" at their romance.

Conceptualized by Lifestyle by Feliz, and with the aid of Paperheads, Audio Stage Lighting, Audrey Rose Dusaran, the video allowed the pair to show off their hidden quirky side.

Not bad for a last-minute OBB.

Shocked? Well isn’t that what this video is about anyway? To make jaws drop and tongues wag.

Maggie and Victor’s prenup featured the couple in different stages of undress and pretzeled into one another in the car, underwater, in bed. It may not be everyone’s cup of tea, but impressed or distressed, everyone craved to see what the big deal was-and the only thing we got from that is that it was a big deal. Thanks in large part to concerned netizens who spread it like wildfire online.

Apart from its obvious cinematic deliciousness, we loved this trailer for two reasons: First, it’s as real as it gets. The beauty queen has never been known as the girl next door and her real estate mogul husband never pretended to be a saint either. Marriage is about honesty, after all. Second, bravo for originality and boldness.

Prenup Filipinocelebrities Bestprenupvideos Filipinoweddings
Your Guide to Thriving in This Strange New World
Staying
In? What to watch, what to eat, and where to shop from home
OR
Heading
Out? What you need to know to stay safe when heading out