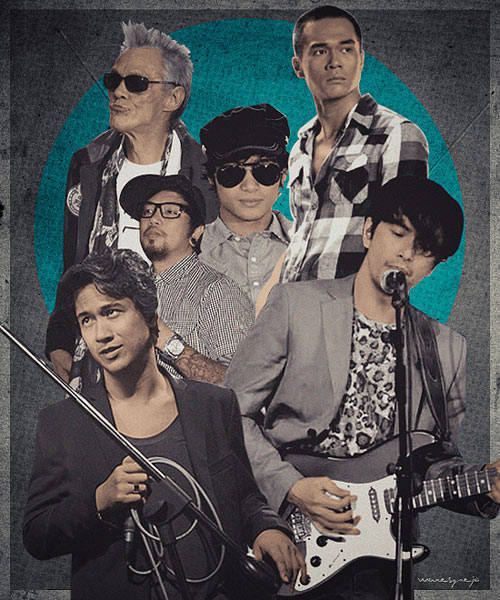 (SPOT.ph) Showmanship is often part of being a musician and some musicians are better showmen than others. We’ve listed 10 Pinoy rock stars who decided to try their luck in theater, TV, and film. They appear from a whole range of offerings-from indie flicks to afternoon telenovelas.

Musical cred: OK, we use the term "rock star" loosely (hence, the 11th spot) when it comes to this Filipino-Barbadosian, who’s Joseph Formoran in real life. He gained fame in the late 1990s with reggae-flavored songs like "Good Boy" and "Noon at Ngayon." He was also a crowd-pleaser during his live perfomances as he exhibited slapstick skills.

Acting stint: It must have been his comic tendencies that landed him a plum role in the action-comedy movie, Asin at Paminta (1999). His co-star was no less than Pinoy showbiz icon Eddie Garcia. He went on to star in movies like Weyt a Minit, Kapeng Mainit (2001) and S2pid Luv (2002). Sadly, Blakdyak wasn’t able to sustain his success. He staged a comeback in 2009.

The verdict: Blakdyak could have had the best of both worlds. He had a knack for crafting catchy tunes. He was also a natural comedian.

Musical cred: This low-profile charmer was the bassist of the band, Narda, which was active from 2002 to 2007. He left the band in 2005, presumably to pursue film studies.

The verdict: He’s a steady bass player and he’s a reliable actor. He strikes us as the kind of person whose skills will get better and better.

Musical cred: If you want to meet a living Pinoy rock legend, this man is it. His music career started in the 1960s, when he was part of a band that eventually settled on the name The Surfers. Later on, he was part of another band called The Downbeats, where he became known for moving like Mick Jagger of The Rolling Stones. In fact, he was tagged as "The Mick jagger of the Philippines." In the 1970s, Smith joined the Juan de la Cruz Band. According to fan sites, "Smith composed the band’s most popular song,’Himig Natin,’ backstage in a ladies’ toilet (he said the door to the men’s toilet was busted) in 1972, while waiting for his turn to play in a concert called ’Ang Himig Natin,’ at the Rizal Park grounds."

Acting stint: With his larger-than-life personality, Smith could easily be a character actor. He and his family were featured in the reality show, The Smiths in 2011 and Smith has played bit roles in movies like 2005’s Ang Pagdadalaga ni Maximo Oliveros (uncredited, as "the pianist) and 2012’s Boy Pick-Up: The Movie (as "Master").

The verdict: He’s definitely a rock star, but he’s not a bad character actor either. We just think he should stick to being himself because, well, he’s good at that.

Musical cred: Frontman of the kick-ass rock band Slapshock, this tattooed singer-songwriter walks the talk of his nu metal with songs like "Cariño Brutal" and "Agent Orange."

Acting stint: He starred as one of the thugs in Jim Libiran’s mock documentary about the gangs of Tondo, Tribu (2007).

The verdict: We’re not saying he should quit his band, but if he wanted to, he could take on more roles. His unaffected and no-frills perfomance in the movie was impressive.

Musical cred: Franco Reyes is the lead vocalist and guitarist of the band (you guessed correctly) Franco. It’s a supergroup that was formed in 2008, featuring the likes of Gabby Alipe of Urbandub and 8 Toleran of Quezo. The band dominated the 2010 NU Rock Awards, with their single "This Gathering" winning Song of the Year and self-titled debut album being hailed as Album of the Year. Though the other members have gone back to their respective bands, Franco has rallied former band mates and is coming up with a sophomore record this year.

Acting stint: In 2011, Franco Reyes appeared in the Cebuano zombie movie Di Ingon ’Nato (Not Like Us). It’s a Cinema One original movie, about a small town that becomes exposed to a virus that turns people into the living dead. Franco plays the doting husband to Mercedes Cabral, who becomes infected.

The verdict: It’s a zombie film (an artistic take on the genre) and towards the end, Franco goes all out with a bolo and starts hacking and slashing like his life depended on it (and it did). And he cuddled up with Mercedes Cabral. Nothing in this movie makes him seem any less than a rock star. He should stick to music though and just keep taking on roles that are unexpected and challenging.

Musical cred: Jesus, if you don't know this man and what he and his band (you know which one) did for OPM, then maybe you’ve been living under a rock. Let us bring you up to date: He was the vocalist for the Eraserheads (this would be it), after which he fronted The Mongols, Pupil, and, now, The Oktaves.

Acting stint: Most of his on-screen appearances are in one way or another related to his music projects: his cameo in Rufa Mae Quinto's Masikip sa Dibdib, had him singing one of his Mongols songs; he performed "Disconnection Notice" when he guested in Show Me da Manny; he cameoed as himself in Quark Henares' Rakenrol. The most unrelated acting project Ely dabbled in was in Saab Magalona's short film, Spoonfeed.

The verdict: He’s a rock star through and through. He doesn’t need to have a "second job" as an actor.

Musical cred: He is the frontman of the band Callalily, which was formed in 2005.

Acting stint: Cipriano got his feet wet in show business, so to speak, when he starred in the TV5 series BFGF. Next, he was in the TV5 sitcom, Hapi Together. He has since scored roles in movies like Praybeyt Benjamin, Ang Babae sa Septic Tank, and The Reunion.

The verdict: He’s equally talented as a musician and an actor. But, if you make us choose, we’d want him to take on more movie roles. We need more matinee idols with a lot of swagger.

Musical cred: He might not have fronted a groundbreaking band, but Dennis Trillo's music cred is unquestionable. Once upon a time, he was the drummer of underground ska/punk outfit Moyg. If you've never heard of them, that's because Moyg is like a password to the very exclusive, very underground scene that very few of us are a privy to.

Acting stint: It wasn't until 2004's Aishite Imasu 1941 when Trillo’s showbiz career really took off. For playing a crossdressing spy, Dennis Trillo received nominations and awards. Did we mention Aishite Imasu 1941 was his first movie? He’d been in  show business since 2000, as a member of Star Magic Batch 10, and then moved to GMA shortly, where he's been starring in various prime time telenovelas and afternoon fanteseryes.

Musical cred: Pangan fronted none other than The Dawn. You don't need any more credibility than that, do you?

Acting stint: He tried his hand in musical theater in 2000, when he starred along Rico Blanco in the 70s Bistro production of Jesus Christ Superstar, but it wasn't until 2002, when he joined the Atlantis Production of rock musical Tick! Tick Boom! that he really got into theater acting. He has eleven musicals under his belt to date.

The verdict: While his last performance (As Guido in Nine), wasn't particularly convincing, his vocal strength and rock stage experience makes him a natural for theater. He was a blast to watch (and her, of course) in Rock of Ages.

Musical cred: He didn't just front Rivermaya (upon the departure of Bamboo Mañalac); Blanco brought the band out of the 90s and into the 2000s. He had a clear-cut vision of where he wanted to take the band, and for a while, it seemed like he could do it. We say this because when he left the band in 2007, and became a solo artist, his music reflected much of the band's in their sunset years together.

Acting stint: He surprised the public when he landed a rather major role in ABS CBN's primetime offering, 2010's Imortal. But Rico actually started way before this. In 2000, he starred in 70s Bistro's production of Jesus Christ Superstar, while in 2006, he appeared in the film Nasaan si Francis? Blanco is currently the leading man of ABS-CBN’s afternoon soap, May Isang Pangarap, where both Carmina Villoroel and Vina Morales are his love interests.

The verdict: Blanco seems to be going for broke with his mainstream acting career. Well, it’s something he can do when he’s bored with being a musician.

Musical cred: Abaya was the lead vocalist of superstar act Sandwich for its first two records, charming the public's pants off whenever he performed hits like "Butterfly Carnival" and "R2D2." In 2003, Abaya formed Kwjan with his buddies from Ateneo, from where Abaya graduated with a major in Communication. That same year, Abaya became an MTV VJ.

Acting stint: Marc first hit television in the afternoon ABS CBN soap Ligaw na Bulaklak in 2008 and from then on appeared in various television outings in both the Kapamilya and Kapuso channels such as Magkaribal and I Heart You Pare. He's appeared in four films, including 2012's Ang Nawawala. You should also watch him in the 2010 Cinema One Original horror flick, Dagim.

The verdict: Abaya, son of the late award-winning director Marilou Diaz-Abaya, is definitely not a film novice. He’s got the makings of a brilliant actor. He’s one of the few performers whose intense energy works in both his musical world and his acting forays.

Art by Warren Espejo, with photos from PEP.ph., screenshots from music videos, and publicity photos

Jamir Garcia Pepesmith Wincyong Blakdyak Marc Abaya Ricoblanco Elybuendia Dennistrillo Keancipriano Francoreyes Jettpangan
Your Guide to Thriving in This Strange New World
Staying
In? What to watch, what to eat, and where to shop from home
OR
Heading
Out? What you need to know to stay safe when heading out