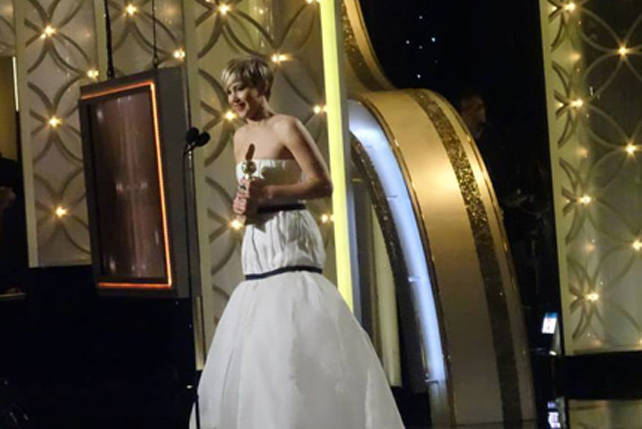 An insider’s look into an annual Hollywood highlight

(SPOT.ph) Three weeks ago, I received an early Christmas present. My good friends Ruben and Janet Nepales, both members of the Hollywood Foreign Press Association, invited me to attend the Golden Globes Awards Dinner at the Beverly Hilton. I had already booked my ticket to the US as I always spend Christmas with my siblings, so I had to rebook and reroute. But hey, it’s not every day you get an invite to a star-studded event where you can see Hollywood celebrities up close. The Beverly Hilton could accommodate 1,200 people for the event, and each ticket cost $750. I wanted to make sure I looked the part for the red carpet, so I wore a black crystal-studded gown by Francis Libiran.

The red carpet was open by 2 p.m. and celebrities promptly walked it. Cocktails were served just outside the ballroom. Security was strict about letting people into the ballroom. You had to have your ticket and a valid ID.

At 3 p.m., a string quartet played music onstage. At 4:30 p.m., the celebrities entered the ballroom. Everywhere you looked, there was a familiar face.

At quarter to 5, announcements were made for the guests to take their seats since the show would be starting at exactly 5 p.m. Right on the dot, Tina Fey and Amy Poehler came out to do their opening dialogue. These two are clearly well-loved by Hollywood and there was a lot of laughter in the room.

In between awards were commercial breaks, and you could see the stars making their way to chat with each other and take photos. I saw Michelle Dockery of Downton Abbey having her picture taken with P. Diddy, and Angela Bassett hanging out with Chris Noth. Kevin Bacon and Kyra Sedgwick were proud of their daughter, who was Miss Golden Globe this year. They were very sweet-you could sense a solid relationship there.

From the applause in the room, you could tell who the crowd favorites were, such as Bryan Cranston, who won the award for Best Actor in a TV Drama for Breaking Bad. Emma Thompson gave him a standing ovation.

As much as I was starstruck, I have to say there were also friendly celebrities like Kerry Washington, whom we met in the elevator when we were going up to the Nepales' room to store our precious "swag bags." I told Kerry that we loved her show Scandal in the Philippines and she was pleased and gracious. Jacqueline Bisset, whom I admired, was not so friendly. Chris Noth and Josh Charles were equally not so gracious. Taylor Swift, Hailee Steinfeld, and Vanessa Hudgens were so nice. Jared Leto was sweet.

There were about seven after-parties, but I only made it to the second. On my way out of the party, I saw Lady Gaga chatting with her good-looking boyfriend Taylor Kinney, who stars in Chicago Fire.

Golden Globes 2014 Beverlyhilton
Your Guide to Thriving in This Strange New World
Staying
In? What to watch, what to eat, and where to shop from home
OR
Heading
Out? What you need to know to stay safe when heading out