PHOTOS: Highlights from the launch of Esquire's September issue with the Eraserheads
Loading
Already a member? Log in
No account yet? Create Account
Spot.ph is your one-stop urban lifestyle guide to the best of Manila. 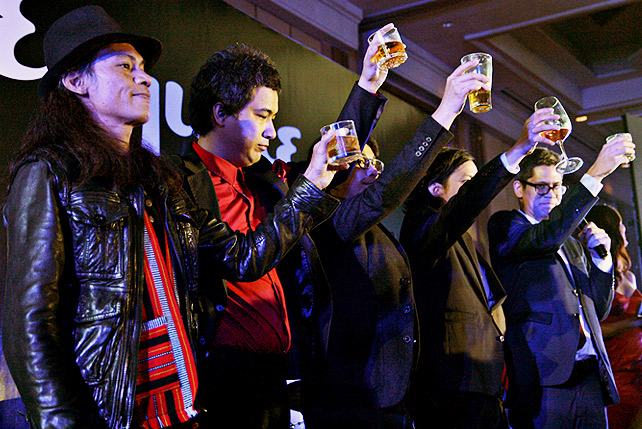 PHOTOS: Highlights from the launch of Esquire’s September issue with the Eraserheads

It was supposed to be just a party...and then the unexpected happened. 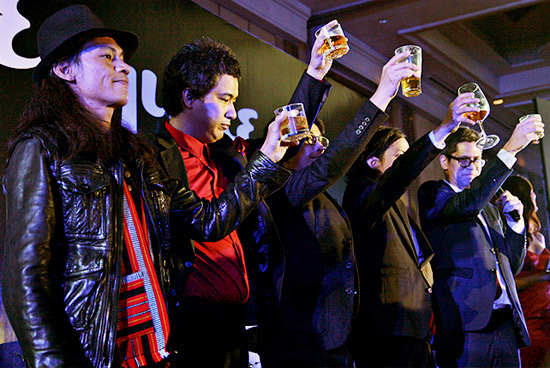 (SPOT.ph) The September issue of Esquire Philippines is supposed to be a travel issue, but with all the hype being generated by the cover subject (not London where it was shot), it could very well have been the Eraserheads issue. The same can be said about its anticipated launch, held last night at the Mayuree Grand Ballroom at Dusit Thani Manila. It went down as a memorable night in pop culture history, all because the very thing that everyone was hoping-but wasn't expecting, given the circumstances-happened.

6:15 pm: A line starts to build and as guests wait in line, Eraserheads songs blast from inside the ballroom. 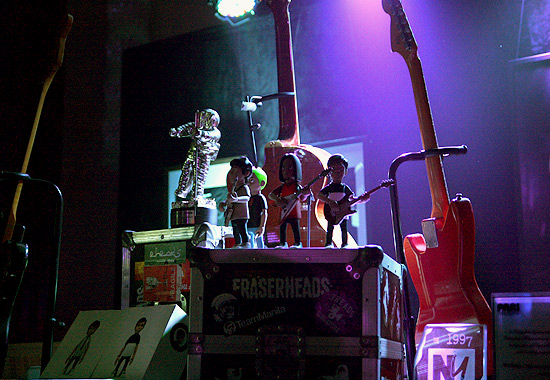 6:34pm: The invite said to "come as you are", which apparently means wear anything black. They start letting people in. 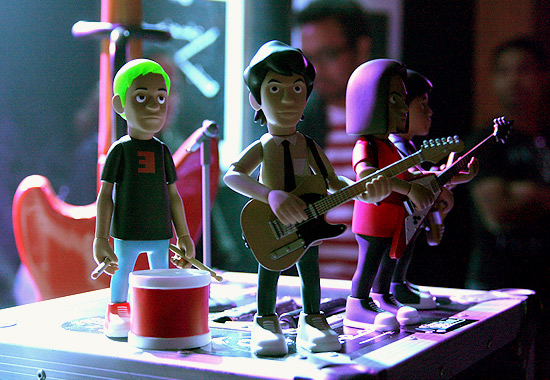 7:10 pm: Crowds gather at both sides of the hall-on the right, where a mini exhibit of Eraserheads paraphernalia is on display, and on the left, by the bar. 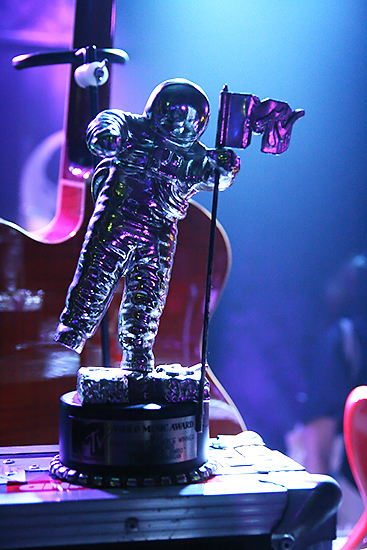 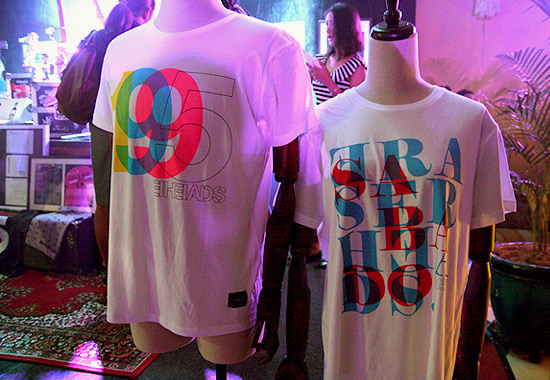 7:49 pm: Independent pop/folk band Ourselves the Elves comes out to play a set of five songs. Spotted: A kid in the crowd who doesn't mind the loud music.

8:35 pm: 15 minutes in and the next band is still setting up. People are already getting antsy. 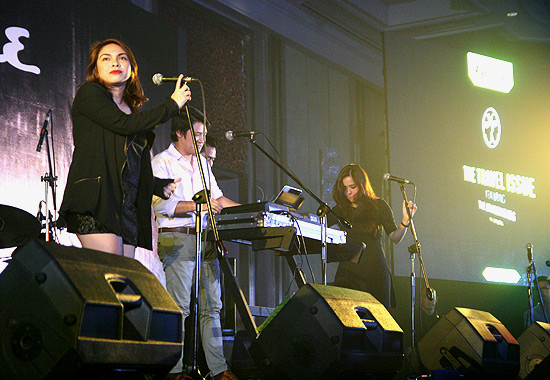 8:40 pm: Punk rock band Cheats, headlined by Saab Magalona, takes the stage. The male lead singer is really feeling it as he dances quirkily to his own beat. "I think this is our most important gig to date," the band admits. 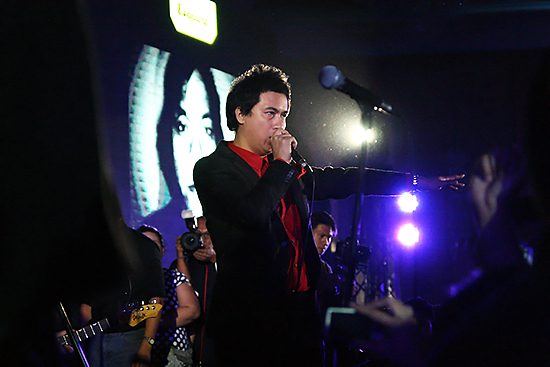 9:10 pm: Esquire cover girl Ellen Adarna arrives at the VIP area, with TV crew and press in tow. Not long after, the real star of the night steals everyone's attention: Ely Buendia has arrived.

9:25 pm: The second band ends their set, and as they do, John Lloyd Cruz turns up.

9:30 pm: The night's host, Catriona Gray, graces the stage. No one can really understand what she’s saying and it seems like no one is listening either. She introduces a video on the making of Eraserheads' two new tracks. People cheer at the sight of Ely and Marcus Adoro.

9:34 pm: Editor-in-chief Erwin Romulo calls on the bandmembers. Yup, they're complete and are all under one roof. The host raises a toast but instead of glasses or beer bottles, people raise their mobile phones to immortalize the moment.

9:36 pm: The music videos of their new tracks are shown. "Sabado" features Sunshine Cruz and two outcasts in a house party, while "1995" is made up of computer graphics, with the last shot capturing the UP Oblation statue. 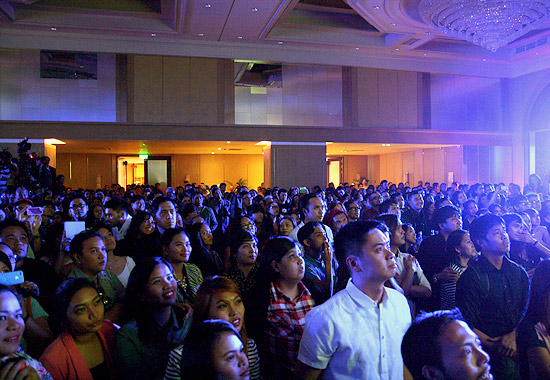 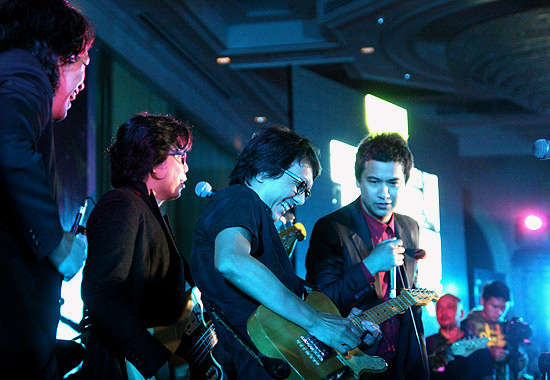 9:49 pm: The unexpected happens. The host tells everyone that the Eraserheads will perform. The crowd roars with excitement. 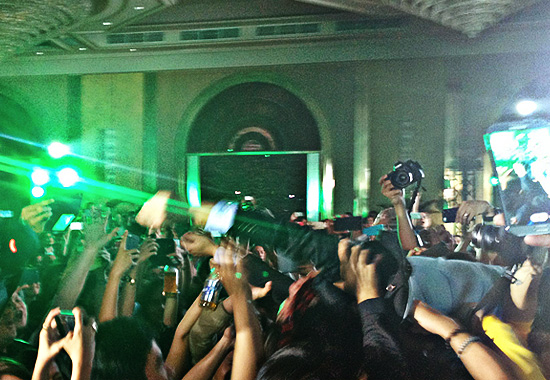 10:10 pm: Quark Henares is called on stage. He takes the mic and belts out "Alapaap." As expected, guests chant "More! More!" after the short set. 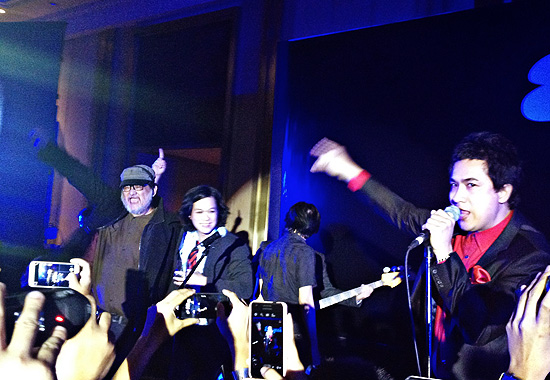 Called to the stage by Ely Buendia: Robbie Sunico (far left), one of the co-owners (along with Patrick Reidenbach) of Club Dredd, where the band first played in 1991. Photo by Lara Parpan 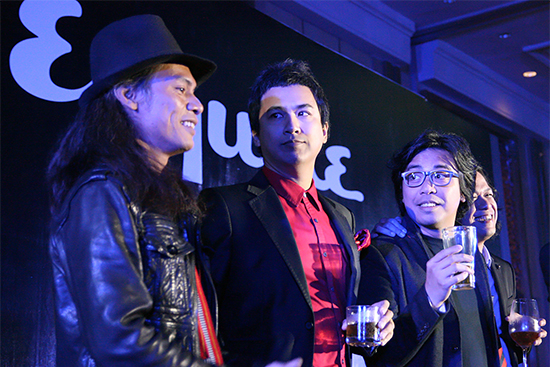 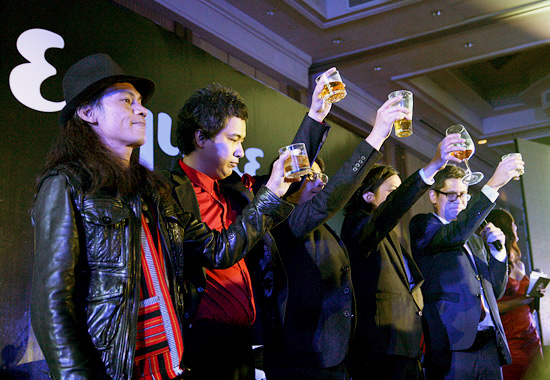 10:20 pm: Ely Buendia gets his own corner at the VIP area and guests come and go to have their copy of the magazine signed. True Faith's Medwin Marfil goes up to Ely for a photo.

10:23 pm: The Diegos fills the room with their music. The DJ-ing duo has people dancing. Soon after, the room starts thinning out. It’s still early, but everyone is happy. For at least a brief moment, the Eraserheads were back.