15 Minutes with Pete Docter and Ronnie Del Carmen, directors of Inside Out

On "Pixnoys," the new movie, and working with emotions...including their own. 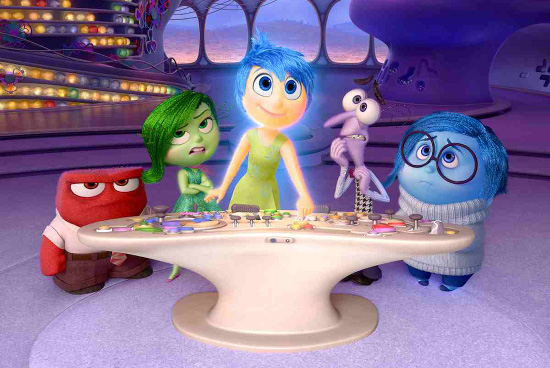 (SPOT.ph) Do you ever look at someone and wonder what is going on inside their head? This is the question that the new Pixar film, Inside Out tries to answer.

The story revolves around 11-year-old Riley and the five emotions in her head. They are led by Joy (Amy Poehler) who makes sure Riley stays happy, Fear (Bill Hader) who keeps her safe, Disgust (Mindy Kaling) who prevents Riley from getting poisoned, Anger (Lewis Black) who makes sure everything is fair, and Sadness (Phyllis Smith) who doesn't know what her role is just yet. Things get complicated, however, when Joy and Sadness are swept into the inner workings of Riley's mind and it's up to Fear, Disgust, and Anger to reluctantly take charge.

The two minds behind...well, Riley's mind were in Manila on August 7 to promote the film. Pete Docter directed and wrote the screenplay, while Ronnie Del Carmen, co-directed and came up with the original story with him. They've both previously worked on other Pixar films, including Up, Ratatouille, and Monsters, Inc.

Here's what Pete and Ronnie had to say about their new movie, the actors they got to work with, and even what emotions would they have in their own minds. 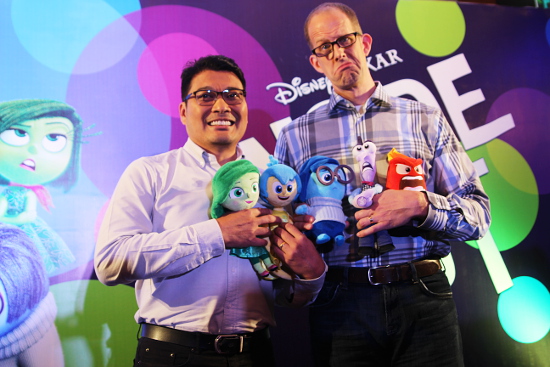 On what makes Inside Out different from other Pixar films

Pete: It's simultaneously the most realistic film we've ever done and completely fantasy at the same time. We set it in a very specific place—San Francisco—and we scouted locations and corners, took tons of photographs to try to capture it. I grew up in Minnesota so we tried to capture the feel of that, as well.

Ronnie: We tried to capture Riley moving as a metaphor of growing up. We all talked about this, and it was kind of like therapy. "So what was your childhood trauma?" [Audience laughs]

On how they visualized the characters and their voice actors

Pete: Lewis Black, for example, is somebody we wanted to use from the very beginning. Usually, what we would do is we would start writing the characters and we start to hear them in our heads. And then you kind of start to ask, "Who does this remind you of?" We grab little snips of audio from TV shows and movies they've been on. The fun part of working with great actors is that they all end up influencing the characters in small and large ways. In this film, we had Amy Poehler. She was amazing. She's also a writer so when we went through the script, she was doing different lines from what we wrote.

Ronnie: They're so great, all fun to work with. Bill Hader was a huge Pixar fan; he came in and he just wanted to be around all the animators. And he was kind of like a big kid. He's a great performer and writer as well. So we just write our characters and hear them in our heads. "[Joy] sounds like Amy [Poehler], we should ask her." And then after, it's like "I hope she says yes." 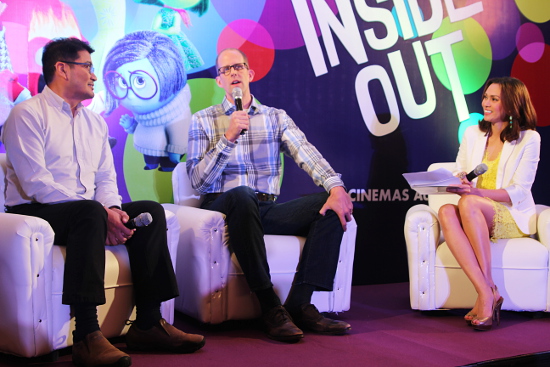 Ronnie: The research actually clarified a lot for us in terms of the story. Question one was "What are emotions?" and question two was "What are they for?" They're very big questions that we have to answer before we can make a movie about emotions. They're a set of responses to challenges of the world. You do not call them up. You are not in charge of how you feel if somebody was unfair to you. If someone was unfair to you, you get upset immediately. You don't choose that. What you do choose is how you respond to it. Do you let off steam? Do you just sit and process it? Different people, different ways of going about it.

It's one of those great turning points for us, because emotions do not drive Riley. They make her feel because they try to do what's best for her. But they can't make Riley do anything. They just kind of wait and see what she's going to do, how she's going to react. You don't want a character to be a robot. That was a great moment for us because thank goodness, the research fell on our way and we can tell the story.

Ronnie: You're talking about two guys who actually made a movie about an old man who went through a tragic loss in the first eight minutes. [Audience laughs] But for us, the boundaries are very real. We really had to be careful, especially when dealing with difficult emotions in the movie.

Pete: For a while, Ronnie boarded some stuff that had depression as a character; a malevolent force. We ended going backing away from that, not because we felt it was too dark but because it didn't have the message we wanted to convey about Joy learning that Sadness is a useful part of life. You can't really learn that from depression. Depression is an illness, an unfortunate one. We were really unclear on how to solve depression. You can't be happy and just wish it away.

Ronnie: You try it so that you know what you're saying no to. The thing about depression is that it's actually the absence of emotion. You can't feel anything, so it's out of the hands of our protagonists.

Pete: I think generally kids are most intelligent than what people give them credit for. We grew up watching Bambi's mother get shot. [Audience laughs]

Pete: We kind of feel like if we don't take it somewhere dark or somewhere deep, it's just going to be trifle.

Ronnie: Children are actually smart enough to handle that. In the end, it's about family, not just Riley and her emotions. 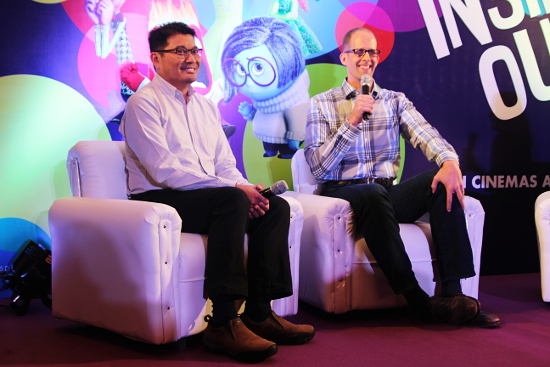 On their approach to directing the film

Pete: I usually try to think of something we have not done before and really push ourselves to try something new. Every time, we feel like it's familiar, we try to shy away from it. The challenge with that is that if you go too far or too bizarre or too new of an idea, people will scratch their heads.

So, this film was right down the middle. I felt like this is our opportunity to show something to people that everyone is familiar with, but no one has seen ever before. The idea of showing how songs get stuck in your head and why that dream you had was so weird... all that stuff we are all familiar with. [Pixar] is a very collaborative place. There's no way we can make these films alone. There'a team of 270 amazingly talented artists who worked on this film, and every one of them contributed to what you've seen.

On what their respective emotions would be

Pete: For me, I would like to say Joy, but more often that not, Fear is kind of driving more than I'd like. So it's kind of between those two.

Ronnie: I'd love to be more like Joy too, because as a parent, you kind of want to make your children happy. It's a little unrealistic, but I want it. I think most of the time, it's Sadness. [Audience awww's.] No, not awww! Sadness is actually one of those things that evolve to Empathy. It's a very useful emotion. Empathy is something that I capitalize on, it's my job to make sure I can relate to other people's emotions.

Pete: Which is why Sadness is the key emotion in Riley's mom during that scene in dinner. Her lead emotion is Sadness, not because she's sad but because she can empathize. 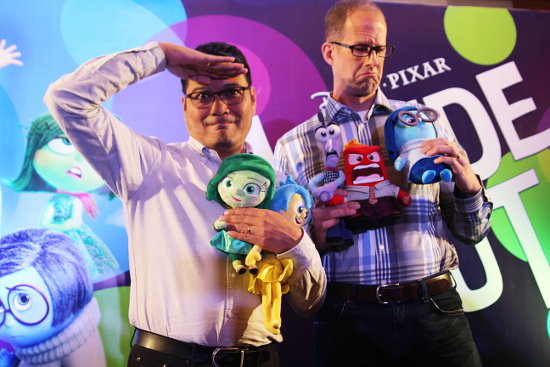 On how their childhood came to play into the movie

Pete: When I was about Riley's age, my dad was doing his doctoral thesis on Danish Choral Music. So we had to move from Minnesota to Denmark. I got plopped into Danish public school, I didn't know anyone and I didn't understand what they were saying.

Ronnie: I had moments like that of when I was a kid and also as a parent. When I was a kid, I didn't want to play basketball. Imagine a Filipino boy who didn't like basketball. [Audience laughs] When I joined Pixar, I had to uproot my kids who were just starting middle school into the Bay Area. That's not fun. They're missing their friends, they come home and they're crying.

Pete: The trick with the number of emotions is that when you talk to scientists, you get different answers. Some people said four, some said 16...27 was an extreme. So we simplified it and put all the attributes we wanted into our key characters. Joy, for example, is a combination of other emotions like Hope or Pride.

On other Filipinos in Pixar

Ronnie: We have a group and an alias in Pixar; we call them "Pixnoys." All of us who are part of that get together every two weeks...

Pete: You guys have been eating and eating... [laughs]

Ronnie: Yeah, we just eat. We would have salo-salo, like a potluck. We also host charity events and auctions so that we can donate to charities for typhoon relief here [in the Philippines]. It's a very active and fun group. We're always smiling.