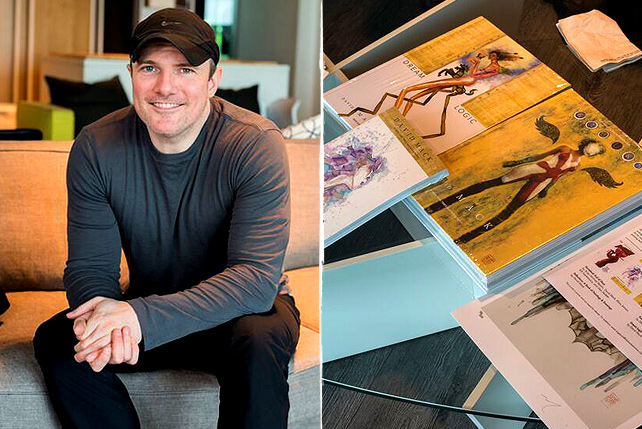 On the Spot: David Mack of Kabuki and Daredevil

We talk to the artist about his influences, favorite places, and more. 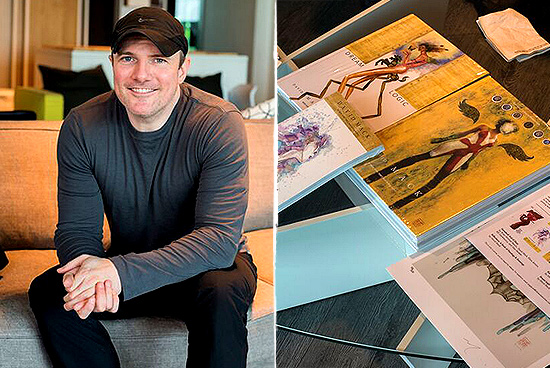 (SPOT.ph) We took a break from celebrating Batman Day at Fully Booked, Bonifacio High Street for an exclusive interview with David Mack, creator of the Kabuki graphic novels and writer of Daredevil. We asked him about his artistic and literary influences, the struggles of college without the Internet, and the recently concluded Asia Pop Comic Con.

Is this your first time in the Philippines?

I left the U.S. on the 14th of September, I arrived in the Philippines on the morning of the 16th. And even in Baggage Claim, when I was getting my baggage claimed here, a guy who had an airport uniform on, came over and said “Hey, are you David Mack? Can I get my photo with you?” He recognized me, he wasn’t able to go to the show. He was super nice, he worked for Philippine Airlines, helped me with my baggage, and then took some photos with me. And this was a really enthusiastic beginning. 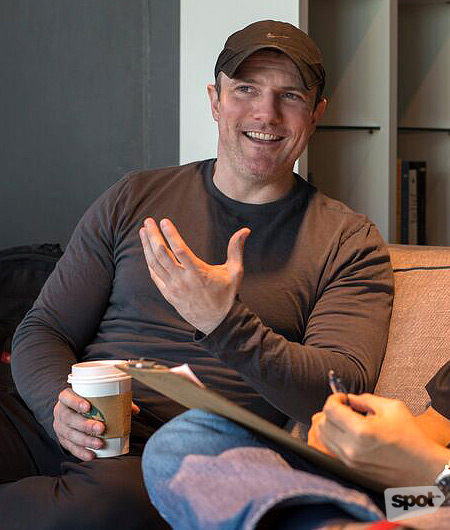 How was the Asia Pop Comic Con?

Asia Pop was wonderful. The people who ran it were also wonderful. [Asia Pop Comic Con's Global Head of Events and Talent Manager] Rita Magnus invited me there. I’d done a couple conventions that she’d invited me to. Singapore the last couple of years. But this being the first one here I think people were just so excited by it. All the fans were so enthusiastic and passionate about it.

Where in Manila have you been?

I walked around here quite a bit. I walked to The Fort, the cemetery area yesterday. This whole area is so nice. And I was at the Makati area before. I was staying at the Peninsula when I was at the convention so I would walk around all that area and get around there, really enjoying all the Filipino food.

For breakfast, I always have longganisa or tocini. [Mark: Tocino.] Yeah, tocino! Yes!

We know you’ve been to Japan many times.

I’ve been to Japan seven times. Yeah, I really enjoy it but you know I enjoy so many other countries too. I really did like Japan. I had a friend who was from Japan and I traveled there with some other friends. When I was in college, we had to take a foreign language [class] and I’d already taken Spanish in high school so I thought “Oh, I’ll take Japanese since my friend can help me with it.” When I was doing Kabuki there were already things I was learning from the Japanese language class, and the history and mythology of Japan and so on, that I felt like were things I could kind of incorporate into the story. 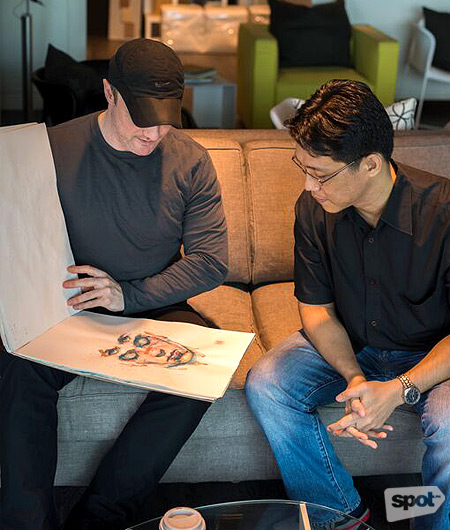 Any other countries in Asia that you’ve been to? Or would like to go to?

I’d like to go to a lot of places. But I remember one of the places that had the most effect on me was when I was in mainland China. We went from Japan to Hong Kong, and then from Hong Kong we took a boat to mainland China. We didn’t really go to any of the big cities, we were just traveling...

It was an interesting experience for me because, you know, clearly I was the foreigner to everybody’s eyes. I wasn’t there for any reason in terms of comic books or anything like that, but people were fascinated with me and were coming up and talking [to] me. It was interesting to see all the local people and to see it from an outside perspective. It was the place I had been where, at the time for me, it was the most different from any place I’d been. Nobody was speaking English. Everything was different. The currency, and the language, and I can’t read the signs.

I was traveling with two other people who were ethnically Chinese but they’d grown up in Hawaii. They were born in Hong Kong so they had spent some time in Hong Kong but also the States. One was learning Mandarin and they spoke Cantonese by birth. It was interesting to try to communicate with all the local people when they don’t speak it that much.

What was it like studying Fine Arts in a time before the Internet?

You look back and you think like you made do, you had to rise to certain challenges that have shaped you to what you are now so certainly it gives me a unique point of view. But it’d be so much more fun now. It’d be so much easier to do things...

But you’re right. I went to university, not an art school, but I majored in graphic design which at that time meant you had to take all the design classes and all the fine art classes for the BFA. And then I minored in literature and so I did that first Kabuki volume as my senior thesis in literature, but I would try to use it for whatever, like typography class or bookmaking class or anything I could as well. Because I knew I wanted to do comics but they didn’t have classes or a major for it. 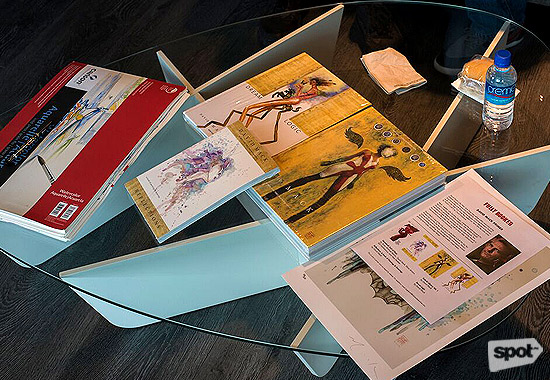 I had a fantasy of going to the School of Visual Arts [in New York] but I knew I was going to be responsible for putting myself through college so in high school I was applying to as many scholarships as I could...I was able to get a full scholarship for art at a different place, Northern Kentucky University, and I got a fifth year scholarship for academics there on a Dean’s Scholarship so I got five full years of scholarship. And I think because it was university and it wasn’t art school, I was exposed to so many more things outside of what I was normally exposed to. That kind of broadened my world, made my world bigger, and I was then able to pull from that and focus that into the book and kind of enrich the work as well.

I had to take foreign languages and math class. I took anatomy and physiology. I was taking life drawing where you’re drawing people, and then I was also taking these pre-med courses where you’re dissecting people and have to learn every muscle and bone of the human body and how it’s constructed inside. So I felt like I could learn that from the interior of the body and then at night you’re doing the drawings of live models to see how the light falls on the person outside.

In retrospect it worked out good because it wasn’t the way you would have necessarily thought it would be. I would’ve liked it to have been a lot easier, like specifically a comic book class or something. I would’ve majored in that if they had it. But because they didn’t have that, it probably made me more well-rounded in terms of my interests and what I can bring to the books I was doing, which hopefully gives it more of a unique point of view and differentiates it from what’s out there. 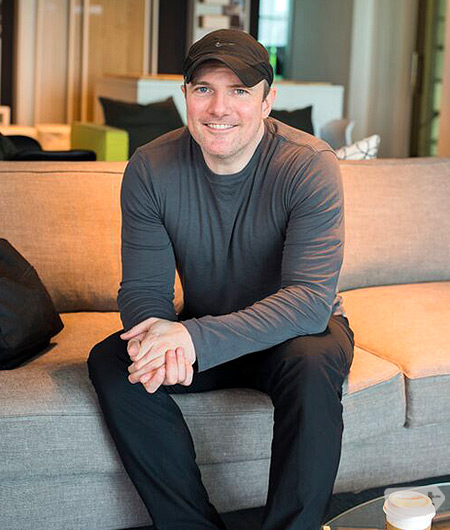 For Kabuki, you’re both the artist and writer. What are your literary influences?

I took philosophy classes and world religion classes too. So I studied a lot of Joseph Campbell and if you look at Kabuki from the Joseph Campbell template, it does match up quite a bit in terms of the Hero’s Journey. Not necessarily the modern superhero tropes but the more historical Hero’s Journey that you would see in Bible stories and stories from across cultures throughout time. So it does have that kind of idea where the hero starts in a certain spot, is born into a certain situation, has family issues, father issues, and then has to kind of make their own way, find out who they are, find out what their purpose is, and then achieve something, confront where they came from before they triumph.

I also modeled that book as a kind of template of...I like children’s books a lot and I like the Alice in Wonderland story, Through the Looking Glass. If you notice all those chess pieces and stuff, it’s really the story of her as a pawn to queen, from the weakest player on the board to the strongest player on the board, which is like childhood consciousness to adult consciousness.

So when I did Kabuki, if you look at it, each person there also corresponds to a chess piece. It was a similar thing where I was trying to take the Hero’s Journey of Joseph Campbell and marry that to the Alice in Wonderland story from pawn to queen. You know, the idea is that the pawn can only move one step at a time, in one direction, but if they do make it across the other end of the board through all of the danger from all the other players, they can then become the most powerful character on the board and move in any direction they want, back and forth. And so I thought, what an interesting metaphor for that as a kind of Hero’s Journey as well.

Fully Booked Fully Booked Bonifacio High Street Batman Day 2015 David Mack Daredevil Kabuki Comic Books
Your Guide to Thriving in This Strange New World
Staying
In? What to watch, what to eat, and where to shop from home
OR
Heading
Out? What you need to know to stay safe when heading out