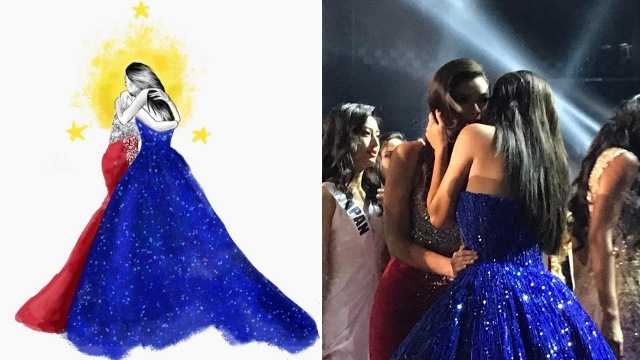 Plus, he tells us his picks for the Top 3 ladies!

The artist behind the now-viral work is 19-year-old Neal Alday, a Multimedia Arts student at the College of Saint Benilde. SPOT.ph asked him about the message behind the illustration, which he is now calling "Solidarity." The artwork took him only 30 minutes to create.

"I think we all collectively breathed a sigh of disappointment when Maxine was not called into the Top 3. That's the main inspiration, of course," said Neal. "To see the former reigning beauty queen give a hug of consolation to a woman who wanted the crown as much as we did is so touching."

"Solidarity" is all over social media, and was even reposted by the Binibining Pilipinas' official Facebook page, as well as pageant mentor Jonas Gaffud. "I never intended it to go viral, and I made it only as a way to express my dismayed emotions into art," he admitted. "I'm mostly glad people have resonated with the piece and some find solace in it. That makes me happy above all."

Out of curiosity, SPOT.ph asked Neal about his picks for Top 3. Although he admitted it was "so hard to choose," he replied, "I would have chosen Kenya, Haiti, and Philippines for the Top 3. They have shown exemplary grace and intelligence, and any one of them could have won."