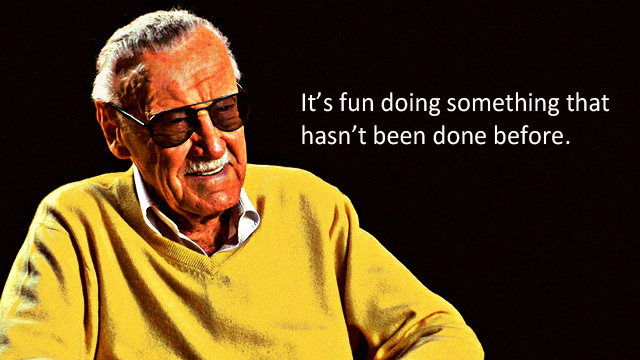 Inspiring Stan Lee Quotes We Can All Learn From

The comic-book writer had a way with words.

Stan Lee, the genius mind behind many of Marvel Comics' superheroes, has passed November 12 at the age of 95. The world (and its superheroes) couldn't believe it.

After years of battling several illnesses, including pneumonia, the comic-book writer left behind a career that spanned over five decades and hundreds of superheroes.

Aside from his famous creations, Stan Lee himself was a hero in his own right. He wove incredible adventures for young and old alike with his exceptional storytelling and character building. But Stan “The Man” also inspired (and even comforted) most of us through his words. Here’s a look back at some of his most memorable quotes, and the lessons we can learn from them.

"It’s fun doing something that hasn’t been done before."

There’s always something great about being unique. Remember, if you feel like you don’t fit in, maybe you were born to simply stand out. Isn’t that a more exciting life to experience?

"The one thing I liked about Peter [Parker's] web-shooters was the fact that they made him more vulnerable. At any crucial moment, he could run out of web fluid and be forced to rely on his wits."

Different superheroes have different kinds of suits. Most of the time, those things help them out. But take away the suit? What are they? What are you? It's not your things or your tools that should define who you are, it's what's within, so work on that.

"Everybody learns differently and everybody gets to a certain point from a different direction."

Ever thought: “Hey, why is everyone else my age doing big things and I’m not?” We all have different paths, different paces, and different clocks. Other people’s progression shouldn’t define you. You pave your own path to making your dreams a reality.

"If you are interested in what you do, that keeps you going!"

If you’re stuck in a dead-end job, or it’s not what you’ve always wanted for yourself, don’t hesitate to leave it. Do what makes you happy, and it won’t feel like working at all.

"Nobody has a perfect life. Everybody has something that he wishes was not the way it is."

Do you ever wish you had whatever everyone else has? Yes? Well, don’t worry, they probably wish they had what you have, too. So don’t take what you already have for granted just because you want something else.

"Achilles, without his heel, you wouldn't even know his name today."

What makes heroes who they are, aside from their powers and good deeds, are their weaknesses. Embrace your own weakness, and turn it into a strength. It’s what makes you YOU.

"[Being a ‘geek’] has become a badge of honor. It’s geeks who really make or break a TV show or movie or video game. They’re the ones who are passionate about these things and who collect [the paraphernalia] and talk about them. A geek is really somebody interested in communication and entertainment and [finding] the best way to avail himself or herself to it."

Never be ashamed of being different. If anything, geeks dictate what entertainment should be and that’s an incredible power to have.

"You know, my motto is 'Excelsior.' That's an old word that means 'upward and onward to greater glory.' It's on the seal of the state of New York. Keep moving forward, and if it's time to go, it's time. Nothing lasts forever."

Lee knew it, and he made the most of his life and contributed everything he could to pop culture. And that means you can, too. Lay it all out there for the world until you you’ve given your last breath. That's what makes a true hero.