Rare Photos of Rock Bands from the '90s Posted by Rico Blanco
Loading
Already a member? Log in
No account yet? Create Account
Spot.ph is your one-stop urban lifestyle guide to the best of Manila. 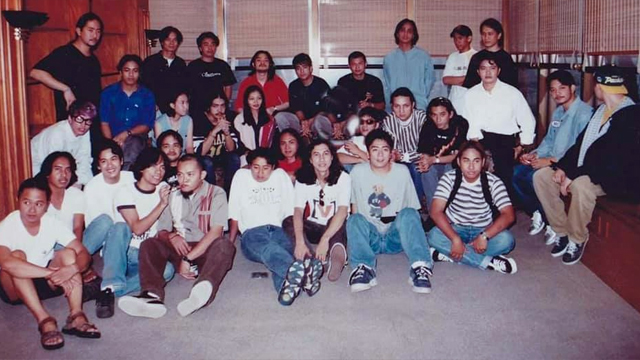 It was unearthed by former Rivermaya frontman Rico Blanco.

On his Facebook page, Rico Blanco has posted a rare photo of OPM legends from 1996. "How many legends can you spot in this gem of a photo?" asks the singer-songwriter.

Although the uploaded image is a bit blurry, fans still managed to identify several '90s icons such as Francis M, Yano, Ely Buendia, Dong Abay, Introvoys, Teeth, The Dawn, and more. The photo drew nostalgic comments from various people, who talked about their favorite singles from the various bands.

In the same post, Blanco poked fun at himself for sporting purple hair. "No wonder I didn't make a lot of friends," he wrote, reminiscing about his fashion tastes back then. He is one of the founding members of Rivermaya, which was at the forefront of Philippine alternative rock back in the 1990s. He was with the group from 1994 to 2007, then eventually became a solo artist since 2008.

As of this writing, the post has been shared 330 times with almost 3,000 reactions.

But Blanco isn't the only one taking a trip down memory lane. Here are other photos  and video clips of your favorite artists back when online streaming wasn't ruling our lives:

Eraserheads and The Itchyworms recreate a photo from 1997 to promote a 2019 concert at the Newport Performing Arts Theater.

Introvoys, which was formed in 1986, is popular for the songs "Line to Heaven," "However Which Way," and "Maynila."

Rico Blanco Francis Magalona Opm '90s Syndication
Your Guide to Thriving in This Strange New World
Staying
In? What to watch, what to eat, and where to shop from home
OR
Heading
Out? What you need to know to stay safe when heading out