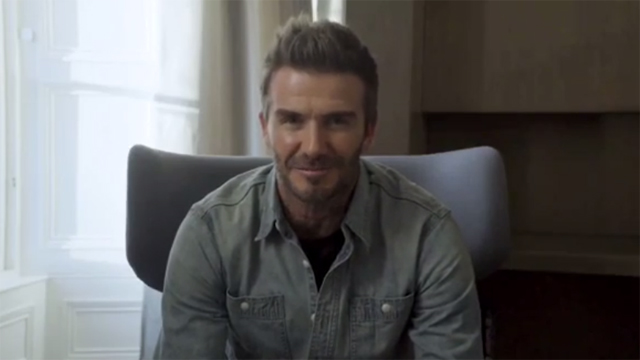 The football star shared some stories during his recent Manila visit.

(SPOT.ph) There are a lot of fitness programs out there, but it could be tricky to find a routine that gives you the results you want. For football star David Beckham, it's about finding what works for you. During his Manila visit for the AIA Philam Life Live Better Expo on October 13, he shared some tips on how to maintain a healthy lifestyle, as well as stories about his kids, and more.

When you're a world-class athlete, and a popular one at that, it can get easy to just say what works for you and expect people to follow suit and yield the same results, to which Beckham disagrees: "We're all different. So you have to find what works best for you." He has a jampacked schedule—from London to the U.S. and vice versa—and shares that he has a tracker to keep himself on top of things. "[It] helps me keep on top of how many steps I'm doing, am I doing it at the right time?" he shares. In between flights and trying to fit as much as he can into his day, he still thinks about his health: "Am I drinking the right things, have I drank enough water? That's the kind of thing that works for me."

One thing he thinks everyone needs more of? "Sleep, we all need more sleep."

Beckham largely owes it to his parents, who have helped him become the athlete and inspiration he is today. He shares, "One of my parents would always take me into training. And even throughout my career, I was very lucky. My parents probably missed three or four games through my whole career." He acknowledges that he's fortunate to have had that since the beginning: "You know, a lot of kids don't have that, you know, there are many kids that don't have that support. So it's about surrounding yourself with the right friends."

And because he had these options and opportunities growing up, he took it upon himself to pass it on to his kids. There's always pressure for them to become the next big football star, but Beckham is more focused on supporting what his kids love instead of encouraging them to take on things that are expected of them. "My oldest son Brooklyn loves photography. My son Romeo loves tennis, so I can't beat him anymore. Unfortunately, he's gotten too good, but I support him in that. I support my son Cruz—he loves to sing, he loves to dance, and Harper Seven is amazing, she could do anything, to be honest," he gushes. "You know, I'll always support my kids, whatever they want to do, whether they want to be an athlete, whether they want to work in a business, whether they want to create something, I'll always support them," he says firmly.

All in all, Beckham believes in context and choice, and it's never as simple as preaching what's worked for him and expecting it to work for everyone. Everyone's priorities and surroundings are different and it would be unfair to expect everyone to be on the same page. "It's all about finding what works for you," he repeats, and if a famous football legend tells you it's okay to go at it at your own pace, we suppose it's okay to take things one step at a time.