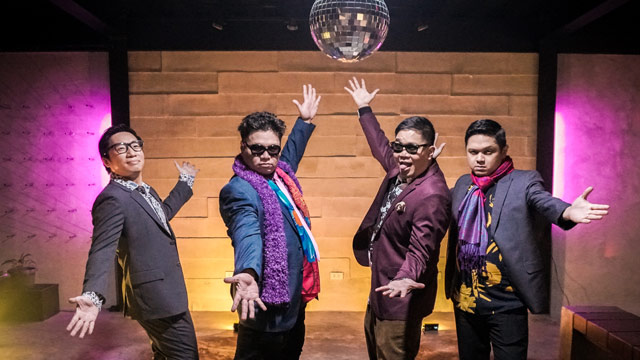 The Itchyworms Launched an Album. What Were They Thinking?

The pop-rock group has just released Waiting For The End To Start.

(SPOT.ph) We all have discoveries that we might not have made if it weren't for the quarantine. For those who've been lucky enough to be able to stay home and savor some free time, it was a chance to explore new skills and learn something different. Others turned to streaming content to keep themselves occupied. But that only holds your interest for so long, and then the binge-watching gives way to other things, or in some cases, returning to a semblance of what life was like pre-quarantine.

To members of the pop-rock OPM band Itchyworms—whom you may remember for hits like "Love Team, "Beer," and "Akin Ka Na Lang"—the quarantine was a period where they learned random things like gardening and editing videos, aside from doing what they do best. Their fifth studio album, Waiting For The End To Start, was created while in quarantine, specifically after having had their fill of streaming movies and shows. SPOT.ph caught up with Jazz Nicolas, Jugs Jugueta, Kelvin Yu, and Chino Singson in a roundtable interview before the virtual launch of their first all-English album, and here's what we talked about.

From Watching to Creating

Jugueta, co-lead vocalist and rhythm guitarist, adds, “Ang dami mong napapanood and lahat ng mga 'yon, may soundtrack 'yon, so kumbaga pumapasok lahat 'yong mga 'yon sa utak namin. So, hindi lang kami influenced ng music but influenced kami ngayon visually ng series, ng movies.” He shares that one of the songs in the new album is an homage to James Bond themes, which was what he binged early in the quarantine.

Of course, what’s an album made during quarantine without a track that talks about being stuck at home? Lead vocalist and drummer Nicolas brings up “Same Day,” which is about the repetitiveness of days gone by. As Nicolas puts it: “Hindi mo na alam kung nag-vitamins ka na ba today kasi pareho lang 'yong itsura no’n kahapon.”

They've got more serious tracks too. Yu recommends listening to “The Silence,” which Jugueta specifically wrote to talk about the pandemic. They also experimented on an unfinished 2005 demo called “Armageddon Blues,” for which they recorded new elements over the demo to finally complete the song.

The Beginnings of Waiting For The End To Start

Most of us know that LDR stands for “long-distance relationship,” but Nicolas uses the acronym to describe the creative process behind the album. “Ang tawag namin do'n, LDR: long distance recording,” he says with a laugh. He describes this project as a “four-bedroom production,” in which whoever wrote the song sends its skeletal structure, alongside the click track for the metronome to everyone in the band, with specific instructions thrown in for each member. Nicolas was in charge of collating the output and constructing it “into one whole piece.”

It’s as easy as it sounds, but that’s not to say there weren’t any hurdles in the production process. “When the ECQ [enhanced community quarantine] started, Jazz had super pangit na Internet, and all three of us, we didn't have professional recording equipment. Hindi pa nagde-deliver 'yong mga Lazada, Shopee, no'ng time na 'yon. So, kung ano lang 'yong meron namin sa bahay, 'yon lang 'yong ginamit namin,” Jugueta shares, and points to the earphones he’s using for the interview—the same one he used to record his vocals. The band was only able to record around four to five tracks in the studio, according to Jugueta, when community quarantine restrictions were relaxed.

If all that talk has gotten you curious to hear these new tunes from the band, you can check out their virtual album launch party complete with special guests like Ace Banzuelo, Sponge Cola, and The CompanY, and even an interactive session with fans. “No door charge but bring your own drinks,” the caption read for the Facebook Live session that went live on August 17.

In between bantering with bandmates—and commenting on their fans’ messages, they gave a preview of some of the tracks included in the album: a live band performance of “Armageddon Blues”—with physical distancing and safety guidelines in place—as well as a solo acoustic version of “Waiting For The End To Start” by Jugueta.

Plus, the band is also slated to headline the Gotobeat Online Summer Festival on August 19 at 10:30 p.m. GMT (that’s August 20 at 5:30 a.m. in PST) as the only Filipino act from among dozens of applicants from around the world. Tickets start at £5 (roughly P320). We’d like to think this band really isn’t waiting for the end to start, because they’re making things happen despite the odds.

You can now stream Itchyworms’ Waiting For The End To Start on Apple Music, iTunes Store, and Spotify.

Itchyworms Adventurer Savvy Seasoned Opm Band Music Album Waiting For The End To Start
Your Guide to Thriving in This Strange New World
Staying
In? What to watch, what to eat, and where to shop from home
OR
Heading
Out? What you need to know to stay safe when heading out