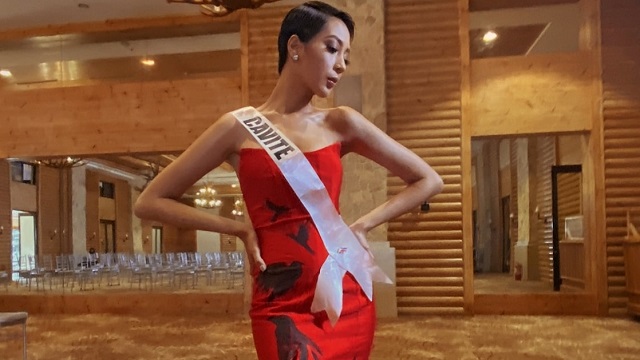 Why Is "Billie Hakenson" the Name to Remember?

The Cavite representative blazed through the 2020 Miss Universe Philippines pageant.

(SPOT.ph) The 2020 Miss Universe Philippines pageant has everyone abuzz thanks to the new age of fierce contenders taking the stage. Iloilo City's Rabiya Mateo claimed her crown at the pageant's finale on Sunday, October 25, at the Baguio Country Club. The 23-year-old Ilongga held her own with her very honest and candid nature—yet we also have to shine the light on another strong woman who made waves during (and after) the pageant: Cavite representative and fourth runner up Kimberly "Billie" Hakenson.

Hakenson was one of the major trending topics online after the pageant, along with Mateo and several other buzzy representatives. But "Billie" was very noticeably the talk of the Twitterverse thanks to the intensity—and not to mention fearlessness—with which she blazed through the pageant. The openly queer queen has been making waves throughout the entire process though, so we shine the light on just some of her best moments throughout. Here's why Billie Hakenson the name to remember:

The Q&A portion of any pageant is arguably the make-it-or-break-it section—and consequently always the bit that goes viral (for good or bad reasons). Hakenson came out triumphant with her short, confident, and hard-hitting answer after being asked about how she can be a positive change to the world. "I was a survivor of gender-based abuse and without knowing it, maybe so are you," she started off saying, shedding the light on millions of victims of discrimination out there.

"I am not here to just be a voice, I am here to amplify voices because we will not be silenced by fear anymore. We are here to be empowered by truth," added the fearless Hakenson.

She used her time on stage to remind everyone to vote

"We have to participate in selecting our leaders," said Hakenson during the pageant. She also reminded everyone about the struggle women needed to overcome just to be able to vote—an intrinsic right everyone should have had from the start. "For us to be able to complain, and appreciate the things we have as Filipino citizens, we have to vote."

She matter-of-factly stated that she was bisexual

Hakenson first made waves thanks to the way she introduced herself during the preliminary round of interviews. "I'm Billie Hakenson, representing Cavite and I’m a bixesual and I’m proud to be here," she stated—and immediately queer audiences across the nation felt incredibly seen.

...and then clarified that she was simply reiterating her truth

The queen then took to Facebook to say that she "Certainly did not come out on the Miss Universe Philippines stage. I simply reiterated my truth." Folks everywhere reacted to a proudly queer contestant in a beauty pageant—which while not unheard of, unfortunately is still quite strange to some.

"I am a proud member of the LGBTQIA+ community," wrote Hakenson. "This journey is dedicated to every single person who has been pigeonholed, discriminated, or dehumanized for their gender identity, gender expression, or sexual orientation. May we no longer be silenced by fear, but empowered by our truth and the support of our allies."

She showed everyone her sense of humor

This cheeky banter during the preliminary interviews showed us just how much wit the Cavite representative has. So we've got a queen who is strong, persevering, fearless, and, of course, with a sense of humor—what's not to stan? She might not have come out on top, but needless to say, Billie Hakenson is one to watch. Until the next pageant, queen!