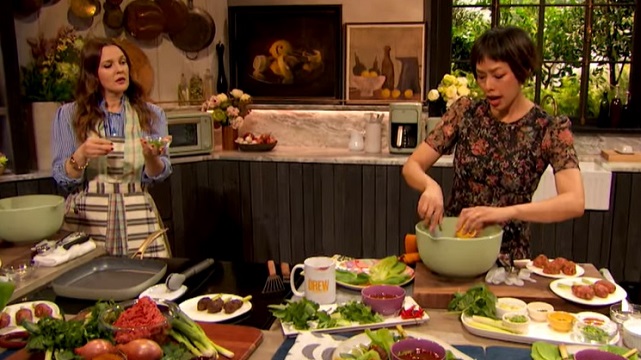 Turns Out Drew Barrymore Is a Huge Fan of Patis

She and Pinay chef Pilar Valdes dropped the first recipe from their cookbook.

(SPOT.ph) Hollywood A-lister Drew Barrymore and U.S.-based Pinay Pilar Valdes have known each other for a while now, with Valdes acting as the former's personal chef for years. And all that time they spent working side by side in the kitchen has now resulted in their very own cookbook! Rebel Homemaker was announced by the pair on The Drew Barrymore Show on April 21. "It feels like a birth announcement," shared the actor on her talk show.

Valdes and Barrymore have been working on the book for "a long time," they shared, and it will finally be released on November 2. Barrymore spoke about how her friendship with Valdez—and their connection to food—"was a huge saving grace for me and something I could hook into when my life felt so floating." She added that if you find someone you connect with and want to create something with them, as she did with Valdez, then you definitely should.

"I think it's so much about relationships and community," added Valdez. This common desire they had was "one of the reasons we gravitated towards food."

"This cookbook is just about opening up that table, inviting more people in," said the chef. Valdez first dropped by The Drew Barrymore Show in October 2020 when the pair made a super creamy quinoa risotto. The chef is also co-founder of New York-based catering service Kickshaw Cookery.

The two unveiled a gigantic version of the book on the talk show and even sampled one of their recipes. They put on their aprons for some physically distanced cooking. On the menu was Vietnamese inspired lemongrass beef skewers that, we swear, looked way too tasty given how easy it seemed to cook it.

Barrymore and Valdes clearly have that kind of wholesome friendship that everyone wants to have in their lives. The actor even pointed out that Valdez had a funny penchant for sliding in a mini ice cream scoop as a tool in most of their recipes. But the funniest part was arguably when Valdez went in with some patis—a necessary touch for any Southeast Asian recipe—and Barrymore had to show her appreciation for the seasoning.

"I love fish sauce!" Barrymore exclaimed with a near growl, and you could tell by Valdez' smile beforehand that she just knew her friend was going to say that. Who would have thought someone on the other side of the world could be just as obsessed with this admittedly stinky sauce as we are?

So, while we wait for the November 2 drop, we'll have to make do with their wholesome cooking vids.

Drew Barrymore Reads Pilar Valdez Chef Adventurer Savvy Seasoned Staying In Heading Out
Your Guide to Thriving in This Strange New World
Staying
In? What to watch, what to eat, and where to shop from home
OR
Heading
Out? What you need to know to stay safe when heading out