Meet Noreen Joyce Guerra: The Girl Hidden Behind Your Fave K-Drama Actors
Loading
Already a member? Log in
No account yet? Create Account
Spot.ph is your one-stop urban lifestyle guide to the best of Manila. 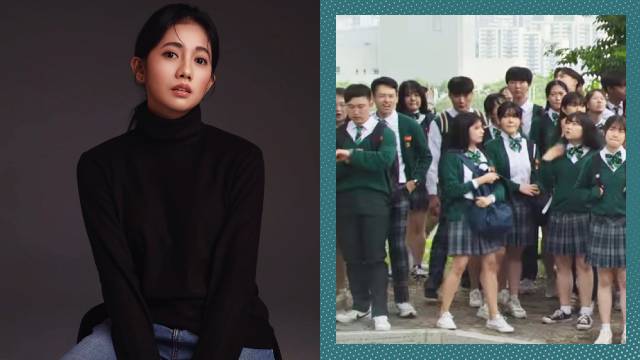 That All of Us Are Dead Girl With the Backpack Up Front? Yup, She's Pinay

She has over 50 dramas under her belt and might have met your favorite artists too!

(SPOT.ph) Admit it, you're just as much of a K-drama stan as we are and chances are you've most likely finished or in the process of finishing Netflix's newest hit, All of Us Are Dead. So let's talk about it, shall we?

While watching the first episode where the students of Hyosan High School were rushing to get to the school before the bell rings, we noticed something dear Spotters. While tons of students wore backpacks during the scene, it was a specific one that caught our fancy. By the corner left of the scene is a girl who carries her bag the way most Filipino commuters would—in front of her chest. Anyone who's ever walked the streets of the Metro know what safety move we're talking about. So we did a little digging.

Meet Joyce Guerra: the girl literally hidden behind your fave K-drama idols, and yes, we really do mean literally.

Noreen Joyce Guerra, or as she calls herself, Joyce, is a Filipina currently based in South Korea. According to her YouTube channel, she's been staying in the country since 2015 having first applied as a scholar in Sookmyung Women’s University for a Master's degree in Business Administration. Currently she works as a manager for a financial company.

So how did she end up behind some of Korea's most popular actors? Back when she was still living in the Philippines and volunteering with the Korean Cultural Center, Guerra met one of the managers of Korean group N.O.M. (Nature of Man) who shared his network of connections once she landed in Seoul. "Sinabihan ako ng mga producer tsaka director kung gusto ko raw mag-on-cam kasi nga lagi akong off-cam." she mentions in an interview with GMA Public Affairs program, iJuander.

In the same interview, she mentions how she initially tried to audition for foreign roles in Korean productions but would typically be rejected. So instead, she went straight for the Korean roles. "I tried to submit my profile sa Korean agencies naman that handle Korean talents. So ayun, doon ako nakuha, actually. Kaya 'yon 'yong reason kung bakit 'yong mga role ko sa dramas is Korean.”

Take a look at Joyce as she's literally behind each scene: