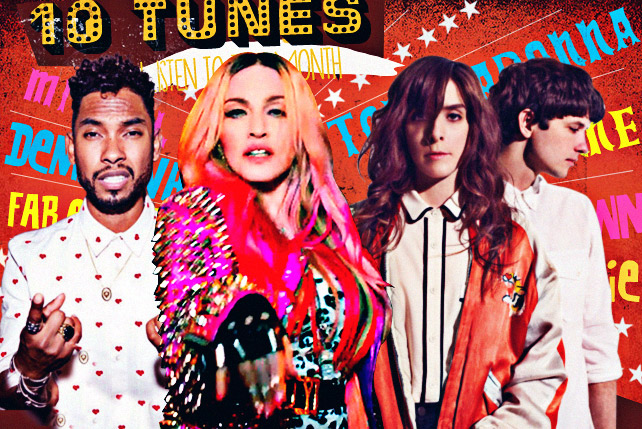 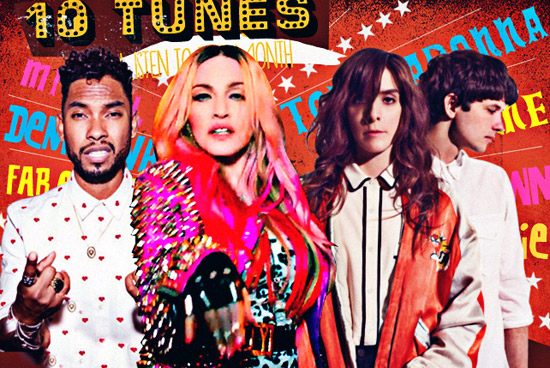 "Bitch I'm Madonna" was supposed to boost the streaming service Tidal. As a track, we've heard better, but club-goers can definitely dance to this while in a total state of inebriation. The music video? Let's just say that the remote transmissions of big names such as Beyoncé, Katy Perry, and Miley Cyrus (plus the green-screen appearance of collaborator Nicki Minaj) were a bit of a letdown.

Fun fact: Chris Rock, Rita Ora, and Alexander Wang were among those on set for the taping of the music video.

Young local talent Julie Anna San Jose parties with her international friends in her U.S.-shot music video for "Tidal Wave." Though known for her ability to hit the high notes, San Jose keeps it sexy, fun, and subdued in this pop track.

Demi Lovato gets sexy and bi-curious in her latest pop single. It's a way more playful release compared to her ballads, and we absolutely welcome it. She sounds cool, relaxed, and flirtatious. Sure, it kind of reminds us of Katy Perry's cheeky track "I Kissed a Girl," but "Cool for Summer" is, er, cool on its own.

The single’s first few seconds will light up your face. We think it's a fitting tune for rainy afternoons indoors. “Beyond” delivers both youthful energy and mature sophistication as the band's influences—from jazz to rock to soul—take effect in the track.

Song: "WILDHEART Chapter 1: Find What You Love and Let It Kill You"

It's impossible to get enough of Miguel, and his 12-minute short film featuring the videos for his three songs "...going to hell," "Coffee," and "NWA" is a delight for fans. It starts off smooth with a bit of rock influence, then switches to sexy pillow talk, and ends with a tight collab with LA rapper Kurupt.

Song: "Some Kind of Magic"

We've said it before, but allow us to repeat it: Clara Benin is the next big act to watch for. Her signature soulful, airy vocals fit genres from folk to soul to electronic. In her latest collaboration with producer Asch, Benin whispers and croons through a relaxed, ambient backdrop.

Song: "What a Good Woman Does"

We're still aching over the 2014 breakup of The Civil Wars, but we're happy to hear from former contemporary Christian-pop singer Joy Williams nonetheless. "What a Good Woman Does" is a heartfelt, empowering, and inspiring track that highlights the songstress' sensibilities and vocal prowess.

The Edralins’ new indie-pop single is refreshing material that you'll love to play these rainy days. It's catchy, sentimental, bubbly, but still slightly edgy. The lo-fi quality makes it more endearing and reminds us of some good old Pinoy music.

The entrancing and reverb-heavy track from the Baltimore-based dream-pop duo is a beauty. There's no denying vocalist Victoria Legrand’s ability to evoke emotions with her vocal turns. Although the tune is louder, maybe even noisier, than what we're used to, we're left pleased.

Count on DJ Joey Santos to get you dancing. With the help of Lux Leigh, the local DJ has created an explosive dance ditty that can get audiences in and out of the Manila underground music scene moving.

Fun fact: DJ Joey Santos is also an assistant editor for Digital DJ Tips, an online resource for DJs and those aspiring to be one.

Playlist New Music Fresh Tunes
Your Guide to Thriving in This Strange New World
Staying
In? What to watch, what to eat, and where to shop from home
OR
Heading
Out? What you need to know to stay safe when heading out