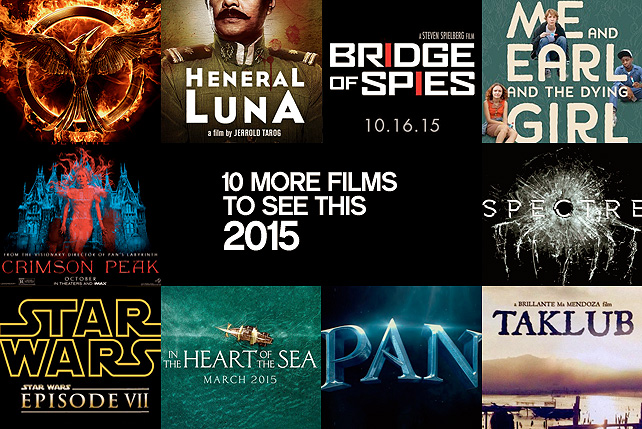 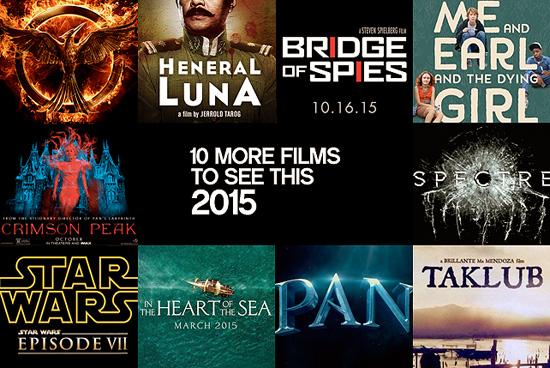 (SPOT.ph) It has already been an eventful 2015 in cinema. We said goodbye to a Furious family member, people made their appointments with Mr. Grey, the Avengers saved the day again, the Jurassic dinosaurs ruled the World once more, we even had a little date with Tadhana...and it's only August! There are a lot more films to see in the latter half of the year, and it's never too soon to mark your calendars. To help you, we're sending out some “Save the Date” cards for the films you should look forward to for the rest of 2015!

There are many other films to look out for, especially with numerous film festivals like Toronto and Telluride about to begin, and Oscar season starting. What films are you most excited for as we head into the last few months of the year?

There are many tales about General Antonio Luna (John Arcilla)—how he was as a commander, and how his life came to an end. Sana Dati director Jerrold Tarog showcases the General's life during the Philippine-American war in this historical epic.

3. Me and Earl and the Dying Girl

Based on the best-selling novel of the same name, Me and Earl and the Dying Girl is a film about movies, life, and friendship. It begins when Greg (Thomas Mann) is asked to befriend Rachel (Olivia Cooke) after she is diagnosed with leukemia. It already has the cinephile stamp of approval, sweeping the top awards at the Sundance Film Festival in January.

Sure to be an intense and suspenseful outing, Steven Spielberg teams up with Tom Hanks (with a screenplay co-written by the Coen brothers) to tell this true-life story about a lawyer (Hanks) who finds himself in the middle of the Cold War, during which he must negotiate the release of a downed pilot in the Soviet Union.

Pan's Labyrinth director Guillermo del Toro returns to the world of gothic horror just in time for Halloween. Edith (Mia Wasikowska) marries the mysterious Thomas (Tom Hiddleston), but then experiences nasty bumps in the night while living in an old, creepy mansion with her new husband and sister-in-law (Jessica Chastain).

James Bond (Daniel Craig, in his fourth appearance as 007) is back, picking up where Skyfall left off. A cryptic message leads Bond into discovering a sinister organization called SPECTRE, in which a member (Christoph Waltz) claims a chilling connection to Bond himself. Léa Seydoux, Monica Bellucci, Dave Bautista and Ralph Fiennes also star.

Katniss Everdeen's story is coming to an end in epic fashion. The final part in The Hunger Games film series finds Katniss (Jennifer Lawrence) leading the final charge against President Snow (Donald Sutherland) as the rebels from District 13 face off against the Capitol in an all-out war.

In this intense, effects-heavy biographical drama, a ship is attacked by a whale of mammoth size, leaving its crew to fend for their survival in this tale that inspired Herman Melville's classic novel Moby-Dick. The film stars Benjamin Walker, Cillian Murphy, with Thor and new-Spidey themselves, Chris Hemsworth and Tom Holland, as the ship's crew.

Saving the best for last? The Star Wars franchise awakens once more. The plot of the film has been kept under wraps by the cast and crew, but the return to this epic space opera has the whole world buzzing. New faces (John Boyega, Daisy Ridley, Oscar Isaac) join past heroes (Harrison Ford, Carrie Fisher, Mark Hamill) in the biggest sequel of the year, set 30 years after Return of the Jedi.

2015 Films Movie Schedule Movie Release Dates 2015
Your Guide to Thriving in This Strange New World
Staying
In? What to watch, what to eat, and where to shop from home
OR
Heading
Out? What you need to know to stay safe when heading out