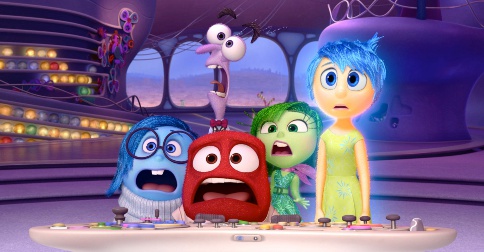 (SPOT.ph) Is it just us, or did July seem to fly by? We welcome August with a whole new roster of movies to see, from a new Marvel reboot to a long-awaited Pixar movie. Mark your calendars for these release dates!

When Marvel said "reboot," they meant it; the newest Fantastic Four film has a darker tone and an all-new cast. It stars Miles Teller, Jamie Bell, Michael B. Jordan, and Kate Mara as a young foursome who teleport to a dangerous universe that alters their physical forms. Now, they must use their newfound abilities to save the world.

CharDawn fans, rejoice! Richard Gomez and Dawn Zulueta are back with a new movie where they play a married couple whose relationship is tested when another woman (Bea Alonzo) enters the picture. The film is directed by Nuel C. Naval.

Neil (Simon Pegg) is a disillusioned teacher who suddenly has the ability to do anything he wants. Said ability was bestowed upon him by a group of aliens (John Cleese, Terry Gilliam, Eric Idle, Terry Jones, and Michael Palin) who watch him from afar as an experiment. This also happens to be one of Robin Williams' last films.

Has the Cold War ever looked so sexy? A CIA agent (Henry Cavill) and a KGB agent (Armie Hammer) must work together to stop a criminal organization from using nuclear weapons to start a war between the U.S. and the Soviet Union. The film is directed by Guy Ritchie (Sherlock Holmes, Sherlock Holmes: A Game of Shadows).

Based on the video game series of the same name, Rupert Friend stars as the titular genetically modified assassin. He targets a corporation that wants to use his secret origins to create an unstoppable army of weapons.

Emotions (literally) come alive with Pixar's newest animated film, which takes us inside the mind of a little girl named Riley. Different personified emotions that range from Joy to Disgust help guide her through everyday life, especially when she goes through a difficult, life-changing event. This is when things get complicated. The film stars Amy Poehler, Bill Hader, Phyllis Smith, and Mindy Kaling.

Amy (Amy Schumer) is an uninhibited magazine writer who steers clear of commitment. Things change when she writes a profile on a charming doctor (Bill Hader) and begins to fall for him. The film is directed by Judd Apatow.

Jason Bateman trades in his usual comedy with a psychological thriller. The quiet life of a young married couple (Bateman and Rebecca Hall) takes a terrifying turn when an acquaintance from the husband's past brings mysterious gifts and a horrifying secret.

Rusty (Ed Helms) surprises his wife (Christina Applegate) and two sons with a cross-country road trip to a fun park. Needless to say, their family bonding goes awry. The movie is the seventh installment of the National Lampoon Vacation series.

When aliens misinterpret classic video games as a declaration of war, they attack Earth by using the games as weapons. President Will Cooper (Kevin James) recruits former video-game champ Sam Brenner (Adam Sandler), to lead an all-out battle to save the world.

Movies August Manila
Your Guide to Thriving in This Strange New World
Staying
In? What to watch, what to eat, and where to shop from home
OR
Heading
Out? What you need to know to stay safe when heading out