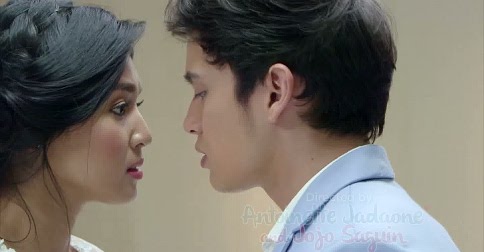 10 Observations From On the Wings of Love

James Reid and Nadine Lustre's new teleserye has lots of bird metaphors. Will it fly?

(SPOT.ph) It's been about five months since we first saw Paulo Avelino and Jericho Rosales try to pass themselves off as brothers. We bid goodbye to the complicated love triangle of Mia, Gael, and Carlos in Bridges of Love, and say hello to a new and more lighthearted telenovela starring James Reid and Nadine Lustre in their first primetime series together.

On the Wings of Love revolves around Leah (played by Nadine), who heads to America in search of a better life for her and her family. She hopes to stay in the U.S., but there's just one problem: her tourist visa is about to expire and she's running out of time. Her only option is to marry Clark (played by James), a man cynical about life and love. (Does all of this sound familiar yet?)

The Proposal plot aside, the show is directed by Jojo Saguin and Antoinette Jadaone (whom you might remember from rom-com favorites That Thing Called Tadhana and You're My Boss). Will her new TV series match the same witty, likeable banter of her movies? It's still too early to tell, of course, so for now, we checked out the first episode, which premiered August 10.

1. The show starts off with a metaphor.

2. There are more birds.

The opening sequence includes bird illustrations, but that's not all. Her mom, Rona, is an OFW who promises the young Leah that she will take their family to the U.S. one day. She gives Leah a dove in a cage and says, "Babalik at babalik pa rin siya sa'yo tulad ng pagmamahal ko sa inyo."

The tragedy is, of course, that she dies in an accident and must be buried in the U.S. Leah's family loses their home and life gets harder. The scene is a direct parallel to the moment Leah's dove escapes from its cage. More metaphors.

4. Leah and Clark are destined for each other.

The Pinoy serye scene is no stranger to the concept of destiny. Leah firmly believes she is destined to be in the U.S., but more than that, the show says she is destined to be with Clark. The much-younger Clark finds Leah's dove and brings it back to her. Little do they know, their paths will later cross again.

You can hear the flapping of bird wings when the show transitions between Leah and Clark.

6. It's a surprisingly short backstory.

Unlike other telenovelas, the show wraps up the backstory about halfway into the first episode. Both Clark and Leah are all grown-up and are headed to the U.S., with different circumstances. Clark is already taking his oath of citizenship, while Leah is applying for a tourist visa in the embassy to join a choir competition. (We actually get to hear Nadine sing for a bit, and she's pretty good.)

In true meant-to-be fashion, they both share the same goals—to work hard enough so they can send money back home. Leah wants to support her ailing father and sister (who is a single mom). Clark works as a bell boy to send his siblings to school.

7. There is a funny montage of immigration interviews.

One of the episode highlights is when Leah (and a bunch of other applicants) plead with immigration agents to accept their applications. We also get a first glimpse at Leah's douchey boyfriend, Jiggs (Albie Casino). In a touching moment, Leah explains that she wants to visit her mother's grave to feel closer to her, which helps her get a tourist visa.

Audiences will likely get more of this as the show goes on. They also make him speak English every chance he gets...probably because his Tagalog still needs a bit of work.

Jiggs' U.S. application is rejected and he resents Leah for wanting to leave instead of waiting for him. They promptly break up. In a twist of events, we find out that Jiggs is Clark's cousin, who tells him off (via webcam) for speaking English. We quote, "Mag-Tagalog ka nga. Pa-cool ka pa kasi." We can already tell they're setting up a complicated love triangle of sorts.

As if the show hasn't already driven the point hard enough, the episode ends with Clark and Leah bumping into each other in San Francisco and...get this, almost kissing. (We're still not sure how exactly that happens in real life, but okay.) We also find out that Clark works as a bell boy in Leah's hotel.

On a sidenote, Joel Torre plays dads really well. We admittedly had to grab our tissues every time he came onscreen.

On The Wings Of Love Nadine Lustre James Reid Jadine
Your Guide to Thriving in This Strange New World
Staying
In? What to watch, what to eat, and where to shop from home
OR
Heading
Out? What you need to know to stay safe when heading out