Aiza Seguerra told by ASAP management to take leave of absence
Loading
Already a member? Log in
No account yet? Create Account
Spot.ph is your one-stop urban lifestyle guide to the best of Manila. 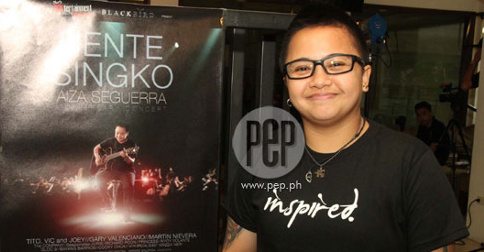 It's supposedly due to a network war.

(SPOT.ph) In a press conference, Aiza Seguerra revealed that he was told by ASAP management to take a leave of absence, reportedly after the ASAP show in London.

The singer, who has been a mainstay on ASAP Sessionistas for a couple of years, said that it was probably because he was a cast member of GMA Network's new morning telenovela, The Ryzza Mae Show Presents...Princess in the Palace. Aiza explained that he wasn't a contract or exclusive artist, and that he was simply a "working actor" that "needs work."

He didn't think there would be an issue, since Princess in the Palace and ASAP are two completely different shows. "Kumbaga, being in this business long enough, siyempre 'di na ako magpapaka-plastik," he said. "That's how it is, alam naman natin na hanggang ngayon ay meron pa ring network thing na nangyayari. Especially, I think with the AlDub issue, medyo fierce ngayon. So, yeah, I think, they are just protecting themselves. And ang sabi lang nila, they they don't want to set a precedent na gawin din ito ng ibang artists sa kanila."

Aiza emphasized, however, that he holds no grudges against ASAP management. "At the end of the day, it's also work. I understand, no hard feelings, and I respect the decision," he said.

Aiza started his career in Eat Bulaga as a contestant of Little Miss Philippines. The noontime show has been conquering ratings, thanks to the KalyeSerye that features AlDub.

Aiza Seguerra Asap
Your Guide to Thriving in This Strange New World
Staying
In? What to watch, what to eat, and where to shop from home
OR
Heading
Out? What you need to know to stay safe when heading out