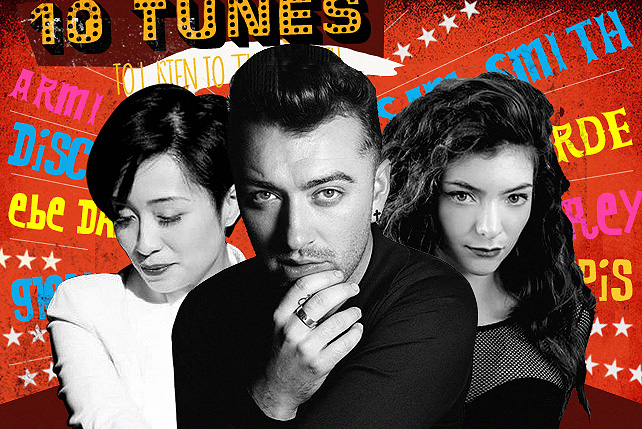 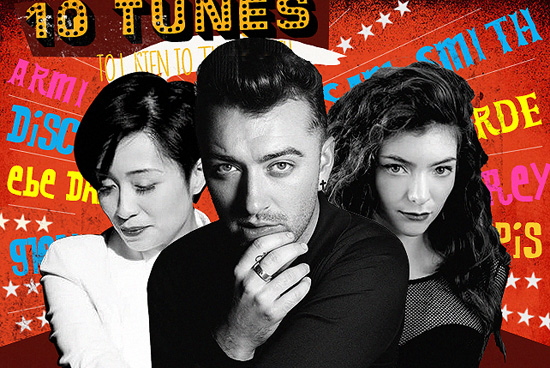 Electronic duo Disclosure (comprised of brothers Howard and Guy Lawrence) teamed up with "Royals" singer Lorde for "Magnets." The track, off Disclosure's sophomore album titled Caracal, starts with percussion loops before introducing Lorde's seductive vocals and bursting with hypnotic synths. It's not like the brothers' previous club anthems, but it's just as excellent (if not more).

Fun fact: Aside from Lorde, Disclosure also collaborated with Sam Smith, Miguel, and The Weeknd, to name a few, for Caracal.

Two well-loved Filipino musicians come together to deliver the poignant “Prometheus Unbound.” The steady arrangement, gentle vocals, and moving words bring to mind struggle, but at the same time hope and strength amidst adversity.

Song: "Writings on the Wall"

British music superstar Sam Smith can do no wrong and further proves this with "Writings on the Wall," his theme for the upcoming Bond movie, Spectre. The monster ballad features jazzy piano, dramatic orchestra, and Smith's intense and emotional vocals. His signature high register during the chorus lends vulnerability, rawness, and honesty to the track. It's the kind of song that needs no embellishments or theatrics.

Fun fact: "Writings on the Wall" is the first Bond song to ever hit number one in the UK singles charts.

Ebe Dancel needs no effort in exuding sincerity and warmth through his music. His endearing vocals, plus poetic lyricism, will always put the listener in a safe place. “Kasayaw” is a touching tribute that features strong vocals against a lovely folk-rock arrangement.

Song: "Music to Watch Boys To"

Stunning songstress Lana Del Rey recently released her dreamy new single "Music to Watch Boys To." It sounds somber, sexy, and otherworldly—not surprising coming from the American musician. The slow-paced music video is a fitting accompaniment to the tune, too.

Song: “This Song is Not About You”

The first few seconds of the track, with its kick-ass guitar riff and infectious “doo-doo-doo-roo-doo,” is indicative of an entirely satisfying piece. There’s a bit of restraint in the angst of “This Song is Not About You,” but it just proves you don’t have to go all-out crazy to produce a rocking tune.

Artist: Ourselves the Elves

“Longing For” sounds dreamy, a fitting arrangement for the rather sentimental title. It’s the kind of track you’d turn to on a gloomy and rainy day indoors as you contemplate your lost (or faraway) love.

Fun fact: Ourselves the Elves’ Geography Lessons EP/DVD is out on October 10, and will include the band’s second EP plus a DVD of Petersen Vargas’ short film Lisyun Qng Geografia (for which the songs were written).

"Her Mercy" is a sweet revelation by the Irish musician Glen Hansard. The track starts off subdued and keeps a steady pace for a buildup that shifts the initially cathartic mood to a gospel-like explosion of horns and soulful vocals.

Fun fact: The single is off Hansard's new solo album Didn't He Ramble.

Lustbass enlisted the help of songstress August Wahh for “Spiritluvv,” a breezy, soulful, and sexy track with relaxing seaside sounds. It’s an addictive and irresistible collab of which you’d wish you could hear more.

New Music Playlist 10 Tunes
Your Guide to Thriving in This Strange New World
Staying
In? What to watch, what to eat, and where to shop from home
OR
Heading
Out? What you need to know to stay safe when heading out