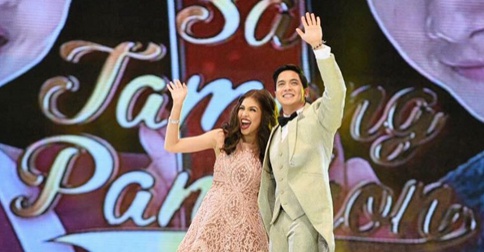 What's all the fuss about Maine Mendoza's "recycled" gown?

We break it down for you.

(SPOT.ph) Saturday's KalyeSerye episode, which took place at the sold-out Philippine Arena, is the biggest topic on the Internet—whether it's the skyrocketing ratings, the record-breaking 39.4 million tweets, or the super-kilig moments.

Despite all the positivity, another controversial issue has been circulating social media. You (and probably dozens of AlDub fans) probably noticed that Maine Mendoza's embellished pink gown by Francis Libiran is exactly the same as a gown previously worn by Kim Chiu. Fans were quick to point out that the dress was "recycled" for the event, even going as far as accusing stylist Liz Uy of "sabotage."

Francis Libiran took to his Instagram account (above) to clear the issue, explaining that Kim simply wore the gown as a model for his 2013 Metrowear Icon fashion show.

On his Facebook page, makeup artist Juan Sarte explained that Maine initially had a custom-made gown but it was deemed too simple for the event. The gown was one of Liz's pull-out options from various designers and it incidentally fit the Cinderella theme of the show. He also said that Liz cleared with Libiran that the dress has not been worn by anyone else since its launch in the fashion show, thus making Maine the first celebrity to wear it off the runway. 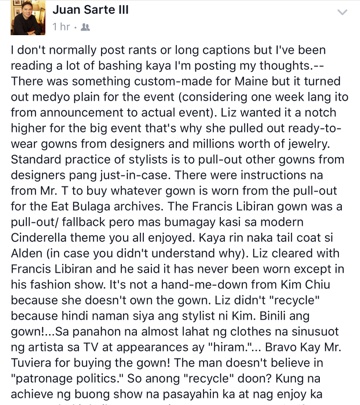 In a separate report, Liz confirmed to StyleBible.ph that the dress, which is part of Libiran's Bangalore collection, was purchased by Tape Inc. for the event, so it wouldn't be recycled or an alleged "hand-me-down" from Kim.

Meanwhile, Kim pleaded for "no hate" among fans and stressed the importance of just "[making] people happy." Amen. Now that that's settled, can we all just focus on the fact that this happened?

Also read: 10 More Celebrity #AlDub Fans That Will Surprise You

Eat Bulaga Francis Libiran Liz Uy Maine Mendoza
Your Guide to Thriving in This Strange New World
Staying
In? What to watch, what to eat, and where to shop from home
OR
Heading
Out? What you need to know to stay safe when heading out