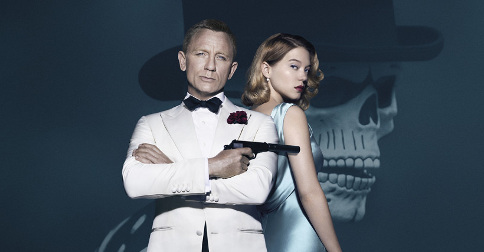 (SPOT.ph) Time flies by so fast! We say hello to a spooky and exciting November with a new batch of movie release dates you shouldn't miss. If blockbuster sequels are not up your alley, there's also a new Pixar movie, a Brangelina reunion, and more.

A troubled but talented chef (Bradley Cooper) from the Paris restaurant scene tries to redeem himself by spearheading a top restaurant and chasing after a third elusive Michelin star. The film also stars Uma Thurman, Sienna Miller, and Jamie Dornan.

A glamorous woman named Tilly (Kate Winslet) returns to her small town in Australia to take care of her mother. Armed with talent and a sewing machine, she creates fabulous haute couture for locals and in the process, exacts revenge on those who have wronged her.

007 is back, and looking better than ever! A cryptic message from his past sends James Bond (Daniel Craig) on a dangerous mission to uncover the secrets of a sinister criminal organization called Spectre. The star-studded cast includes Lea Seydoux, Christoph Waltz, Monica Bellucci, Andrew Scott, and Ralph Fiennes.

Our Brand is Crisis

A brilliant political strategist (Sandra Bullock) signs on to help a Bolivian presidential candidate. Along the way, she makes it her mission to defeat her biggest professional competitor (Billy Bob Thornton), who consults for the presidential opposition.

Scouts Gude to the Zombie Apocalypse

Three Boy Scout friends (Tye Sheridan, Logan Miller, Joey Morgan) put their skills to the ultimate test when their once-peaceful town is the victim of a zombie outbreak.

Written and directed by Angelina Jolie, the film stars her and Brad Pitt as a married couple who take a vacation in the hopes of saving their crumbling marriage. This is their first collaboration since Mr. & Mrs. Smith 10 years ago.

After Katniss Everdeen (Jennifer Lawrence) embraces her role as the "Mockingjay," she joins forces with District 13 to launch an all-out revolution against the Capitol. The film also stars Josh Hutcherson, Liam Hemsworth, Julianne Moore, Sam Claflin, and Woody Harrelson.

This Frankenstein reboot is told through Igor's (Daniel Radcliffe) perspective, from his newfound friendship with young medical student Victor Frankenstein (James McAvoy) to the creation of the famous monster we know today.

What if the meteor that killed all the dinosaurs never landed? Disney-Pixar explores the idea through the eyes of a kind-hearted dinosaur named Arlo (Raymond Ochoa) who loses his way and befriends a human caveboy (Jack Bright).

Are you ready for all the feelings? The film picks up where the first movie ended; Popoy (John Lloyd Cruz) and Basha (Bea Alonzo) have tied the knot, but their relationship is as troubled as ever. Cathy Garcia Molina returns to direct the sequel.

Movies November 2015 Release Dates
Your Guide to Thriving in This Strange New World
Staying
In? What to watch, what to eat, and where to shop from home
OR
Heading
Out? What you need to know to stay safe when heading out