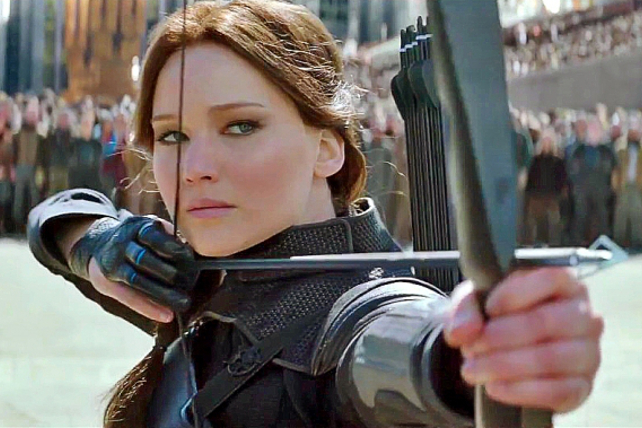 Jennifer Lawrence's swan song as the Mockingjay is the darkest, most dour Hunger Games affair.

(SPOT.ph) The Hunger Games films have never been happy, joyful outings. Like the best-selling book trilogy that it is based on, The Hunger Games film series has gotten darker and sadder after every film, and it finds the series at its bleakest in its final chapter: Mockingjay Part 2. The films have progressed from being a criticism of media and reality television in The Hunger Games, to an exploration of the use of propaganda and the brutalities that war brings with it in Mockingjay. 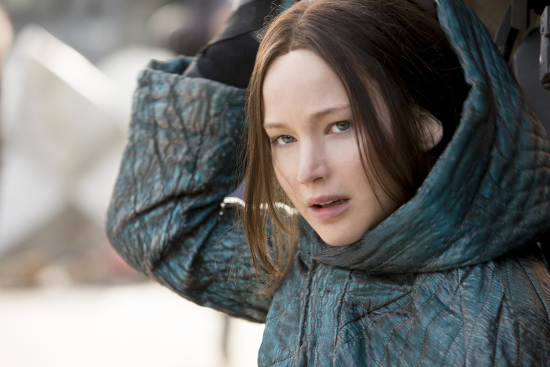 While Mockingjay Part 1 focused more on the use of propaganda in war, Part 2 brings us to the frontlines as it explores the effects and the casualties of war, and the questions that come with it: What do you have to sacrifice for victory? Who will lead next, and will they be better? Who can you trust, and how do you rebuild once the war is over and you're out of the battlefield? It's a dark place to dig into, and Mockingjay Part 2 embraces it fully, almost stubbornly. No one gets to have fun in this film. It is more dour, serious, and depressing than any that have come before it, and that's not a bad thing. 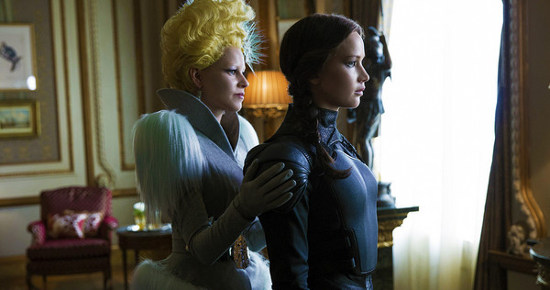 Mockingjay Part 2 picks up right where Part 1 left off, and if you haven't seen Part 1, get ready to be thrown into the deep end because there is no scene or sequence that sums the past films up. Katniss (Jennifer Lawrence) is recovering from the shocking attack she suffered from the seemingly brainwashed Peeta (Josh Hutcherson) at the end of the last film. She, along with District 13 president and rebel leader Alma Coin (Julianne Moore), immediately plan to take control of the last remaining loyal district to the Capitol (District 2) to get closer to current Panem president-slash-series villain Snow (Donald Sutherland), and then attack the Capitol itself. After spending most of Part 1 giving speeches, Katniss wants to take action, even declaring that she “can't make another speech about” the rebellion. Coin refuses Katniss' request of joining the frontlines of the war as she is too precious to be put in danger, but Katniss, as she always does, goes against orders and sneaks to the main base of the rebel army. 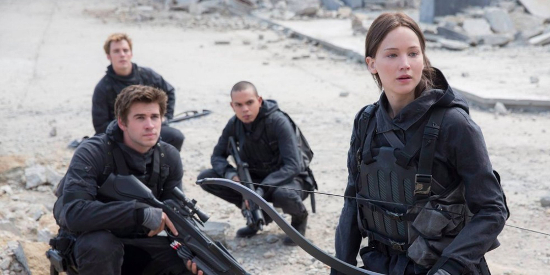 When Coin and former Gamemaker (people who create the Hunger Games each year) Plutarch Heavensbee (Philip Seymour Hoffman) discover this, they place Katniss (to her dismay) in a non-combat team that will, like the last movie, serve as the face of the rebellion, along with a still-not-okay Peeta, a still-not-okay-with-Peeta Gale (Liam Hemsworth), previous enemy-turned-ally Finnick (Sam Claflin), and several other familiar faces. The team follows behind the actual battle, but is still avoiding Peacekeepers (the Capitol's soldiers) and “pods,” deadly booby-traps placed by Snow and the still-loyal Gamemakers, turning the Capitol into a large city version of a Hunger Games arena. At every turn, there is danger lurking, and as with every film that is in the same vein of any “savior of the people” story, there are casualties. The film then becomes a question of whether Katniss and her team can survive this quasi-Hunger Games arena to kill Snow, and if Katniss can live with the fact that people are dying to save her, and it's a very, very difficult time for all. 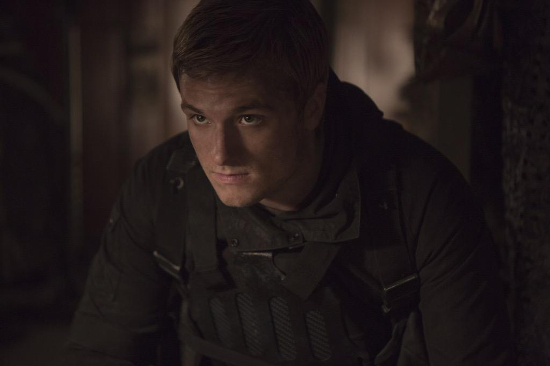 It takes a while for Mockingjay Part 2 to get going, as the first hour sets the story up inside new sequences that tread things we've seen before, almost like a Greatest Hits compilation. The audience is treated to one more impassioned Katniss speech, one more Katniss-and-family drama, one more scene where Katniss walks into a rebel camp and everyone does the famed three-fingered salute, and so on (we even get one more scene where Jennifer Lawrence gets to ugly-cry!). Once Katniss and her assigned team are out in the field, things start rolling faster as they are put into deadly situation after deadly situation. The series finds itself at its best in a lengthy sewer sequence that, to not give much away, involves a lot of running and fighting. It's incredibly tense, scary, and totally thrilling, and ends with several gut-punches. Through this, Katniss is forced to confront the consequences of this war she has been the face of, and it isn't pretty. With real-world terrorist attacks happening, the film will trigger some unpleasant feelings in the latter half. The film attempts to say some really big things about war, and often successfully. 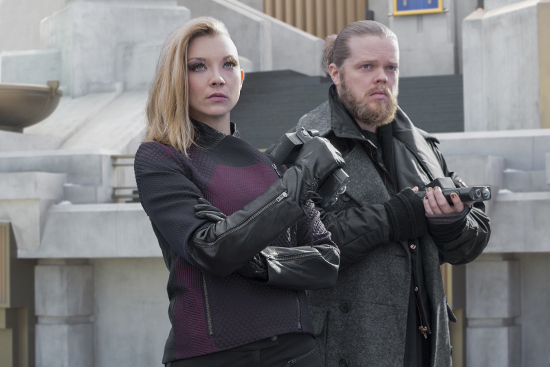 What has been admirable about this series is that it has never allowed itself to be brought down by its central love triangle (arguably its least interesting part), and instead tackles the brutalities of the world they are in, with love just being one of those things that needs to be dealt with. Yes, the script isn't always as subtle as it could be, and the story can be quite predictable, but the filmmakers are able to tell the bigger story like the books did, and the character arc of Katniss is one to be commended. 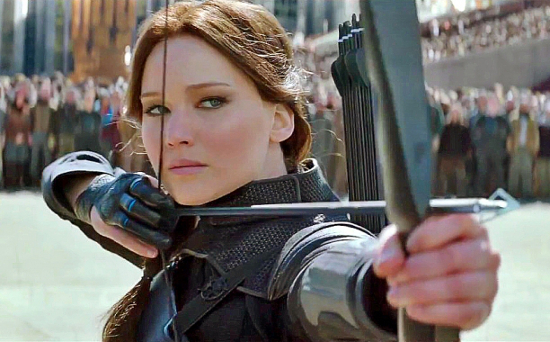 The production value, as with all the films, is topnotch, and the film looks great (the production and costume design on the Hunger Games films have always been excellent). On the acting side, Lawrence can settle into autopilot sometimes when playing Katniss, but it's a good thing her autopilot is better than most. However, it is the large, ever-growing supporting cast that really stand out. Claflin, Sutherland, Hutcherson, and Moore are given more than enough to do good work with, but it is lesser-used actors like Patina Miller (Commander Paylor), Natalie Dormer (Cressida), Wes Chatham and Elden Henson (Castor and Pollux), and new-to-the-series Michelle Forbes (Lieutenant Jackson) that take each moment given to them and run with it. 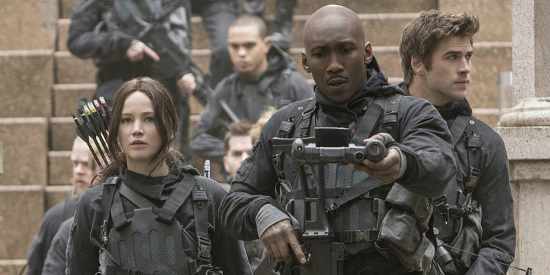 The last hour of Part 2 showcases characters that are fully explored in Part 1 but barely appear in the first half of Part 2. Therefore, Mockingjay should never have been split into two parts, because those last 60 minutes are some of the series' best, as it deals with the sacrifice and death in war. We can only imagine how these parts would have made a bigger impact had it been a more complete film. The series as a whole can be described by paraphrased lines taken from the book itself: The films have a lot of goodness in them, but they are repetitive, even a little tedious after all these years, “but there are much worse games to play.” Mockingjay Part 2 despite being incredibly dour and depressing, is a satisfying conclusion to Katniss' story, and a fitting end to the series.

The Hunger Games: Mockingjay Part 2 is out in theaters today, November 18.

Mockingjay Part 2 Hunger Games Jennifer Lawrence Movie Review Josh Hutcherson Julianne Moore
Your Guide to Thriving in This Strange New World
Staying
In? What to watch, what to eat, and where to shop from home
OR
Heading
Out? What you need to know to stay safe when heading out