Director Lav Diaz says Meryl Streep was all praises for Hele sa Hiwagang Hapis
Loading
Already a member? Log in
No account yet? Create Account
Spot.ph is your one-stop urban lifestyle guide to the best of Manila. 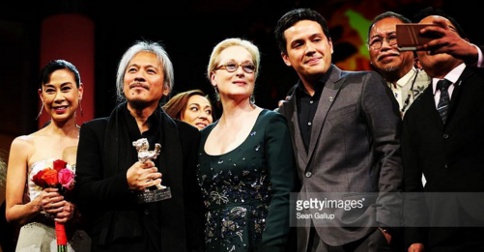 He also urges Pinoys to confront our history.

"She was telling me that while watching the film, she thought of the old days of watching cinema where they had patience...time. Ngayon daw nagmamadali na lahat," he said. "She said that it was very, very nostalgic and sad. She loved the film. And she wants to watch it again in the U.S."

More than that, the director urged Filipinos to examine our history and culture. "We don't talk about it, but we have to confront it. We have to confront the past, examine the past, history," he explained. "We have this beautiful history. Ang ganda ng kasaysayan natin. May pinaglaban ang mga bayani natin. Harapin natin at yakapin natin ito and we can be a beautiful nation one day."

In the interview, Diaz was joined by the film's producer, Paul Soriano, who said that he took on the project to learn from the former. "What an opportunity for a young filmmaker to put himself on the side of a great storyteller, and for me to pick his brain and bring it into my cinema, to learn from him," he said.

The film, which revolves around Andres Bonifacio and the Philippine revolution, stars John Lloyd Cruz, Piolo Pascual, Alessandra de Rossi, Cherie Gil, and more. A local screening of the film is expected to be announced soon.

Berlin Film Festival Berlinale Hele Sa Hiwagang Hapis Lav Diaz
Your Guide to Thriving in This Strange New World
Staying
In? What to watch, what to eat, and where to shop from home
OR
Heading
Out? What you need to know to stay safe when heading out