Top 10 Movie Trilogies That Are Worth Binge-Watching 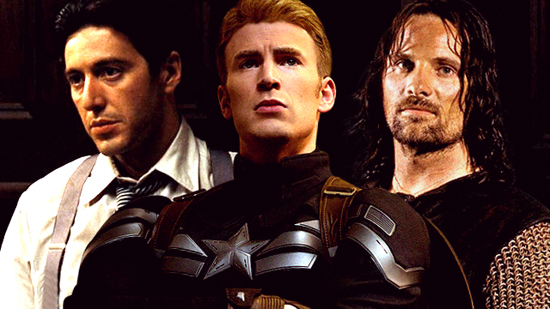 (SPOT.ph) A film sometimes needs only 90 minutes to tell a complete story, while sometimes it needs 550 minutes over the course of three films to really complete its journey. Some of the best and most important films in cinematic history are part of, or are all found in a trilogy. Locally, too, though rare, we have some wonderful trilogies like the Sarah Geronimo-John Lloyd Cruz A Very Special Love installments, or comedies like the Tanging Ina and Starzan trilogies. Three might be a crowd for some, but the following films prove that trilogies can be excellent. Sometimes, greatness just can't be contained in one film.

Best of the Bunch: No other Marvel film brings together superheroes and modern-day politics and espionage as smoothly as Captain America: The Winter Soldier.

Yes, Marvel has (as of this time) 13 films already out in its cinematic universe, and maybe the Iron Man trilogy has its moments, but the best trilogy to have come out of the MCU is the one about the star-spangled hero himself, Captain America (Chris Evans). This trilogy stands out because it is one of the rare cases where each succeeding movie gets better. The introduction to Steve Rogers is wonderfully emotional and nostalgic in The First Avenger, but The Winter Soldier is Marvel's purest and most compelling action film with its expertly choreographed action sequences and espionage storyline. To cap it all off, Civil War brings together Marvel's cinematic heroes in the greatest way possible.

Best of the Bunch: Everything about the first film's fascinating world-building is near perfect.

There is still nothing quite like The Matrix series. Blending philosophy, religion, cyber-punk themes, artificial intelligence, and jaw-dropping action, this trilogy is both of and ahead of its time. In the film, robots have rebelled against humanity, and a virtual simulated reality called “The Matrix” is created during the war between humans and robots. While its two sequels aren't quite up to par, the world in the first continues to grow, fascinate, and confuse audiences new and old alike. Filmmaking-wise, all three films are game-changers in special effects, bending cinema every which way.

Best of the Bunch: Ocean's Eleven is the perfect starting point, introducing a star-studded cast with remarkable onscreen rapport and chemistry.

How the Ocean's trilogy managed to juggle so much star power in three films still remains unbelievable. Featuring an all-star ensemble cast led by George Clooney, Brad Pitt, Matt Damon, Don Cheadle, Julia Roberts, and Andy Garcia, this remake successfully merges sleek and mind-blowing, elaborate heist sequences with a cleverly hilarious script. There's much less gunplay in these heist flicks, but what it lacks for serious action, it makes up for with lightheartedness and an unmistakably cool and suave vibe.

Best of the Bunch: The Dark Knight features an unforgettable performance from Heath Ledger, and is the most thrilling piece of Nolan's Batman puzzle.

Christopher Nolan, best known for his dark, twisted films like Memento and Insomnia, reboots the once-campy Batman franchise into a deeper and darker version of the Caped Crusader. Nolan successfully transforms the comic book genre into something cinematic and serious, with Christian Bale as the new Batman. The first is a solid introduction to Bale's take and while the third is (admittedly) a mixed bag, it's The Dark Knight that truly changes how audiences watch superhero films.

Best of the Bunch: Everyone has a favorite, but for this, it's The Empire Strikes Back–the most memorable and most mind-blowing of the original films, if only for the historic "I am your father!" moment.

This one is a bit of a cheat because as of right now, there are technically seven films under the Star Wars banner, but George Lucas' original trilogy is far too great and important not to include. In 1977, Star Wars changed cinema forever as one of the first to really cultivate a fan culture and a phenomenon never seen before. It only grew to be bigger as fans continued and wanted more of Luke Skywalker (Mark Hamill), Han Solo (Harrison Ford), and Princess Leia (Carrie Fisher). It's an ever-expanding universe that continues to enthrall audiences of every age.

Best of the Bunch: Before Sunrise, but only if we really, really had to choose (it should be a triple tie!), as this is the most romantic, and it's hard not to fall in love with it.

Most trilogies on this list are action-packed and visual effects-filled blockbusters that earned so much cash that making sequels was a no-brainer. Richard Linklater's trilogy about the love story of Jesse (Ethan Hawke) and Celine (Julie Delpy) is the exception. Jokingly referred by Linklater as the "lowest-grossing trilogy," the Before films are small, intimate, usually day-long tales about a couple who meet on a train and fall in love. All three films are scripted beautifully, and Hawke and Delpy's chemistry is immeasurable. This is a trilogy with no guns or superheroes, but it makes just as much impact, if not more, through its poignant characters and romance.

4. The Back to the Future Trilogy

Best of the Bunch: Back to the Future is the perfect set-up to a dazzling sci-fi franchise.

Back to the Future is an original, groundbreaking trilogy that successfully brings together the wonders of time travel and the woes of adolescence through the eyes of Michael J. Fox's Marty McFly. His immensely popular adventures (literally and figuratively) stand the test of time, leaving an imprint on pop culture that goes well beyond its time period, heck, even the science fiction genre.

Best of the Bunch: Toy Story 2. It's perfect, but let's be real, all of them are pretty much perfect.

Pixar has churned out one good film after another, with emotion and heart that mirrors real life. However, with all its originals and sequels, it is the Toy Story franchise that has truly defined what Pixar is all about, as well as what a good trilogy really is. Toy Story grew, adapted, and evolved throughout the years alongside its audience, making for one of the most beautiful stories about growing up. It tackles heavy themes like friendship, self-belief, abandonment, maturity, and many more with genuine grace. A fourth one is on the way, but this original trilogy's characters have already become iconic, and so are its beautiful stories that have made and will continue to make audiences cry buckets.

2. The Lord of the Rings Trilogy

Best of the Bunch: The Lord of the Rings: The Return of the King may be the longest, but it's definitely the most fulfilling, giving viewers resolution.

Clocking in at over nine hours, the Lord of the Rings film trilogy is as epic as trilogies come. The film adaptations of J. R. R. Tolkien's fantasy novel are astonishingly grand, visually spectacular, engagingly told, and stunningly made. Following the trials and travels of Middle-earth residents like Frodo (Elijah Wood), Aragorn (Viggo Mortensen), and Gandalf (Ian McKellen) as they fight in a war and attempt to destroy the eponymous Ring. Peter Jackson's magnum opus is adaptation-done-right, giving life to not just the wonderful characters of Tolkien's book, but the places written about as well.

Best of the Bunch: The first installment is a classic all on its own, and because you just can't beat Marlon Brando.

Rarely do trilogies have films that can be considered classics that can stand alone, but Francis Ford Coppola's The Godfather and The Godfather Part II are both cinematic masterpieces even without looking at them in the context of a trilogy. Sure, the third one isn't as perfect, but it's still a solid piece of cinema. Becoming an incredibly high benchmark for the gangster genre, The Godfather introduces us to the Corleone family, specifically Vito Corleone (Marlon Brando) and his son Michael (Al Pacino) and the workings of this crime family. Tough, absorbing, brilliantly written, and exquisite, The Godfather and its sequels are cinematic artistry that double as must-see viewing for any moviegoer.

Movies Movie Trilogies
Your Guide to Thriving in This Strange New World
Staying
In? What to watch, what to eat, and where to shop from home
OR
Heading
Out? What you need to know to stay safe when heading out