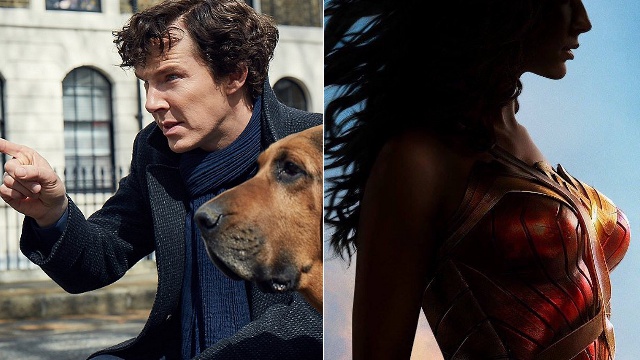 (SPOT.ph) Whether you're a comic book fan or you just really love TV, there's something big and buzz-worthy for you at this year's San Diego Comic Con. And yes, we may be miles away from all the action, but that doesn't mean we can't get excited about what's to come to our TV and movie screens very soon. Here are 10 must-see trailers that you should check out.

November 2017 is a long way from now, but there's still plenty of reasons to get excited about Justice League. For one, the DC superheroes look like they're having waaay more fun. For another, check out that killer White Stripes soundtrack. The film stars Ben Affleck as Batman, Gal Gadot as Wonder Woman, Ezra Miller as Flash, Ray Miller as Cyborg, and Jason Momoa as Aquaman.

On the TV end, BBC's Sherlock adaptation is still a major fan-favorite. Now on its fourth season, the series hints at a darker and more serious tone, with Toby Jones playing the baddie this time around. Benedict Cumberbatch and Martin Freeman reprise their roles, but we've got our fingers crossed for the return of Andrew Scott's Moriarty.

Buckle up for a strange and trippy ride with Marvel's Doctor Strange. The latest, mind-bending footage gives fans a closer look at its all-star cast, including star Benedict Cumberbatch, Tilda Swinton's The Ancient One, Mads Mikkelsen's Kaecilius, and Chiwetel Ejiofor's Baron Karl Mordo.

Coming very soon to the big screen is another magical trip back to J.K. Rowling's Wizarding World. Now set in the New York, we follow the adventures of the eccentric Newt Scamander (Eddie Redmayne), inspired by the 2001 book of the same name.

King Kong gets another reboot from the producers of the most recent Godzilla flick. Now starring Tom Hiddleston, Oscar-winner Brie Larson, Samuel L. Jackson, and John Goodman, it follows a group of scientists who are unaware that they're treading on King Kong's territory.

The best part of 2014's The LEGO Movie is getting his own standalone flick! Will Arnett returns as Batman, whose unhealthy obsession with the Joker forces him to team up with a stray orphan named Robin (Michael Cera).

Finn Jones is moving from Game of Thrones to Netflix, as he stars in the TV adaptation of Marvel's Iron Fist. The trailer doesn't give too much away, but it's enough to get fans and newcomers alike pretty interested.

Get ready to return your childhood's nightmares, with a newer and fresher take on the 1999 runaway hit, The Blair Witch Project. Horror fans, this is a follow-up you don't want to miss.

Neil Gaiman fans, you need to keep your eyes peeled for this TV adaptation of the popular 2001 novel. Created by Hannibal showrunner and director Bryan Fuller, the upcoming series will bring the brewing war between old and new deities to breathtaking life.