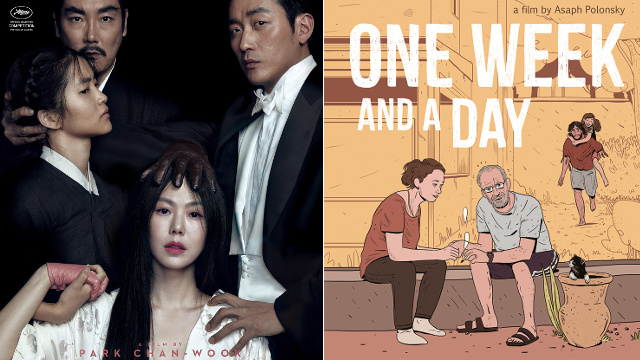 You only need to shell out P150 a ticket!

The festival runs from October 13 to 22 at Trinoma, Gateway Mall, Robinsons Galleria, and UP Town Center. It will also be hosting special screenings of diverse foreign films that have all been lauded in the international film circuit. We round up the ones you shouldn't miss.

Screening schedules subject to change without prior notice.

This Cannes Film Festival winner from acclaimed South Korean director Park Chan-Wook is a psychological thriller set in the '30s. A con man hires a pickpocket to become the handmaiden of an heiress in order to seduce her out of her inheritance. Things get complicated when the heiress starts to fall for her maid.

As a mother and daughter try to live amid the chaos of '80s war-torn Tehran, a mysterious and terrifying supernatural force begins to haunt their home.

Screened during the 2016 Berlin International Film Festival, it revolves around an emotionally volatile young man named Jonathan, who cares for his dying father. He soon uncovers a secret that his father has been harboring from him for years.

One Week and a Day

This gripping drama depicts the heart-wrenching woes of an Israeli couple as they cope with the loss of their child. The grieving father steals medical marijuana from a local hospice while refusing to go to work. Meanwhile, his wife struggles to return to her daily routine.

A modern-day reimagining of the myth of Saint Anthony of Padua, it zeroes in on a bird-watcher whose search for a rare bird leads to a dangerous and enlightening journey. The film has already made its rounds at Locarno Film Festival, Toronto International Film Festival, and the New York Film Festival.

Spa Night is an atmospheric and provocative look at one young man's sexual awakening when he chances upon a job at an all-male spa.

Screened at the Un Certain Regard section of the 2016 Cannes Film Festival, Apprentice is a daring glimpse at Singapore's complicated ties with capital punishment through the eyes of a Malay correctional officer.

It's July 1996, and riots are happening all across Jakarta. When a well-known poet named Wiji Thukul is suspected of activism, he is forced to go into hiding in Brunei.

This heart-pounding thriller is about a taxi driver who figures in an accident and is found liable for the victim's medical bills. His selfless act quickly becomes a nightmare of bureaucratic indifference and blood-drenched drama. The film was screened at the Berlin Film Festival and the Toronto International Film Festival.

This Golden Leopard winner is about a young, struggling physiotherapist in an economically depressed town. Her life changes when she forms an unlikely friendship with one of her elderly patients.

Foreign Films Qcinema 2016 Qcinema
Your Guide to Thriving in This Strange New World
Staying
In? What to watch, what to eat, and where to shop from home
OR
Heading
Out? What you need to know to stay safe when heading out