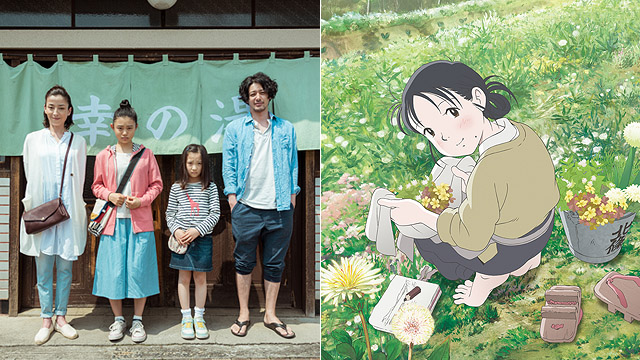 The SPOT.ph Guide to EIGASAI: The Japanese Film Festival 2017

From family dramas to historical comedies

(SPOT.ph) It’s that time of the year again, when Japanese films of different genres are screened at local cinemas for the annual EIGASAI or Japanese Film Festival. This year, the festival celebrates its 20th anniversary.

A total of 20 films will be shown not only at Shang Cineplex (July 6 to 16), but also at the Cultural Center of the Philippines (July 1 and August 5 to 11), Film Development Council of the Philippines in Manila (July 7), and UP Film Institute at the University of the Philippines – Diliman (August 16 to 19). It will also have its provincial run in Davao City (Abreeza Mall Cinema, July 21 to 23; and Cinematheque Davao, July 26 to 30); Cebu City (Ayala Center, August 2 to 6), Baguio City (SM Baguio, August 10 to 13), Bacolod City (SM City Bacolod, August 24 to 27), and Iloilo City (Cinematheque Iloilo, August 25 to 29).

We've handpicked 10 films from the festival that you shouldn't miss. But we won't stop you from watching all 20!

This family drama follows the story of Futaba (Miyazawa Rie) who is diagnosed with a terminal illness. Now a single mom, it's up to her to prepare her often-bullied daughter Azumi (Sugisaki Hana), restart the family's bathhouse business, and look for her husband who left them.

Nagai Tatsuyuki, Okada Mari, and Tanaka Masayoshi of “Anohana” fame reunite for this original theatrical anime. It explores the journey of a high school student as he overcomes his emotional scars.

This documentary filmed for over 16 months takes a closer look at the Tsujiki Market, which has played a significant role in Japanese food culture for over 80 years. This community of wholesalers, chefs, fishermen, farmers, and tourists are preparing for the market's impending move to Toyosu.

Reflections comprises three short films: Shiniuma Dead Horse (Mendoza), Pigeon (Yukisada), and Beyond the Bridge (Kulikar) which follow the common theme “Living Together in Asia” and depict the lives of characters in Asian countries. Shiniuma Dead Horse stars Filipino actor Lou Veloso who portrays the life of an illegal Filipino immigrant in Japan. Pigeon, set in Malaysia, revolves around the story of an elderly man who parts from his family in Japan to live alone in Penang. Beyond the Bridge, set in Phnom Penh, features the interracial love story between a Japanese man and the beautiful Mealea.

If Cats Disappeared from the World (2016)

If Cats Disappeared from the World is one of the three movies dubbed in Filipino by the Tagalized Movie Channel for the 20th anniversary of EIGASAI. It tells the story of a dying postman who strikes a deal with the devil—every time someone dear to him is taken away, he gets to live another day.

Adapted from a novel by Dorian Sukegawa, Sweet Bean follows Tokue (Kiki Kirin) who’s known as a coarse sweet red bean paste artisan. He applies at a local shop selling dorayaki, a pancake sandwich filled with sweetened bean paste, and boosts the store’s business—but not without a price.

The historical comedy The Magnificent Nine is based on Isoda Michifumi’s novel and a true story during the Edo Period. It tells the tale of Yoshiokajuku, an inn town, and how it saves itself from bankruptcy by running a moneylending business.

Criminal psychologist Takakura (Nishijima Hidetoshi) analyzes a missing family case from six years ago and, at the same time, deals with his creepy neighbor. This is a film adaptation of Maekawa Yutaka’s mystery novel.

No one knows that Kinugasa Sachio (Motoki Masahiro) is cheating on his wife—so that when she dies, he has to play the role of a bereaved husband. He later meets Omiya (Takehara Pistol) whose wife died in the same accident and learns the joys of living for others.

Oscar Award-winning Departures comes back to the EIGASAI roster to celebrate 20 years of the Japanese film festival. The musical drama follows a newly unemployed cellist who takes on the job of playing at funerals.

Screenings at the Shang Cineplex Cinema 2 are priced at P100, except for the films on July 14. All screenings at the Cultural Center of the Philippines and UP Film Institute are free of charge. Schedule is subject to change. For updates, visit Eiga Sai's Facebook page.

Films Japan Foundation Japanese Japanese Film Festival Eiga Sai Shang Cineplex Eigasai
Your Guide to Thriving in This Strange New World
Staying
In? What to watch, what to eat, and where to shop from home
OR
Heading
Out? What you need to know to stay safe when heading out