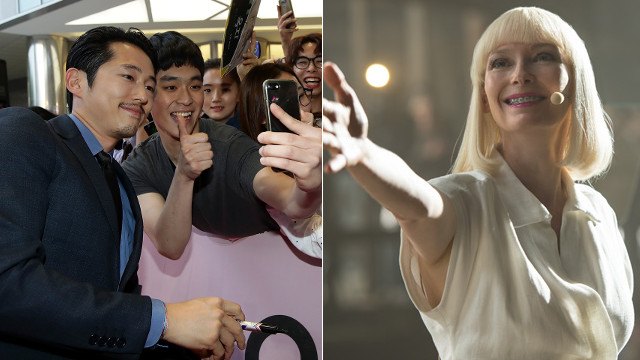 The cast and director of Okja break down its complex storytelling. 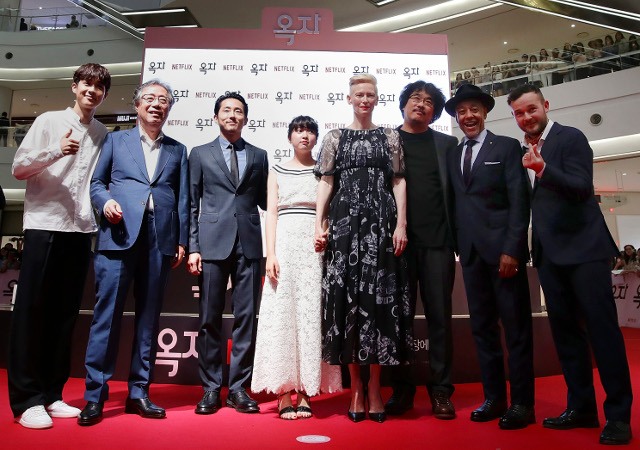 (SPOT.ph) There's a lot happening at Netflix. You have your usual original series lineup—and we're sure you have your own personal favorites—but over the past months, they've been steadily beefing up their roster of original films. (The Brad Pitt-led War Machine is one, while the anorexia-themed To The Bone starring Lily Collins is another.)

And yet, even with a resumé as stacked as his, Bong seems as down-to-earth as he is thoughtful and enthusiastic about film. In SPOT.ph's roundtable interview with the filmmaker, he mentions his friendship with frequent collaborator, Swinton—which also led to her co-producing his latest project.

In the film, the prolific actress plays Lucy, an ambitious CEO looking to turn her company's tarnished image around with a new environmental message. To do so, she decides to breed "healthy" and "all-natural" genetically enhanced pigs all over the world for eventual human consumption...including the film's titular animal character, Okja. Unfortunately for Lucy, Okja's caretaker and best friend (a young girl named Mija, played by Ahn Seo Hyun) will stop at nothing to protect Okja from slaughter. 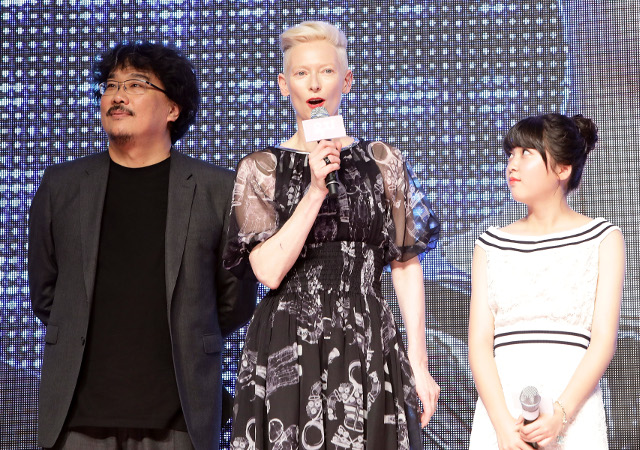 "[I] first told [Tilda] about Okja when [we] were doing the press junket for Snowpiercer," shares Bong. The storyline, he says, was inspired by an old Korean TV show called Animal Farm, which follows the lives of humans and their pets. The more he thought about it, the rest of the film's plot followed.

"[When I was] driving [along] the streets of Seoul, [I] imagined this big animal being stuck on the highway. So initially the size of Okja was much bigger than what you see now—about five stories high. The essence of this animal was that despite it having this very big built and very big size, it had such a sad face," he says. "So [I] began to imagine to wonder why did this animal have such a sad face, who was harming this animal? And why is it so big? The size of an animal means [the higher] value of the product, which led [me] to think about the corporation behind it." 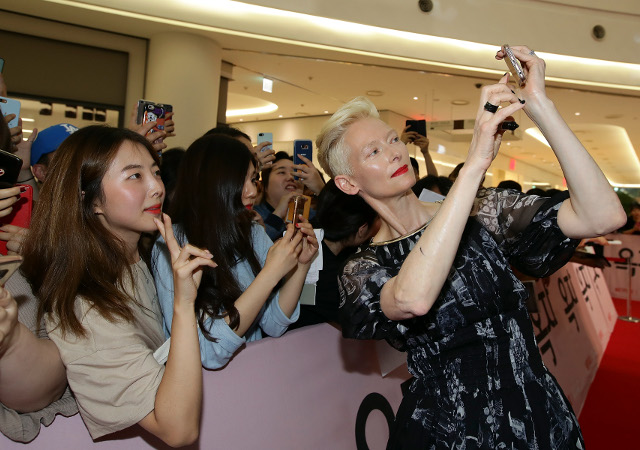 The process sounds simple when Bong puts it that way, but according to his cast, it was anything but. Instead, the "auteur" filmmaker uses storyboards—yes, like animated films—to meticulously plan out every single frame of his movie.

"If you’d told me 10 years ago that I would be working closely with someone who worked with storyboards, I would imagine that that would be quite constricting," admits Swinton. "Now I know that it’s a real liberty, because he will show you where a shot is going to begin and end. And once you know that, you’re completely free in the middle of it." 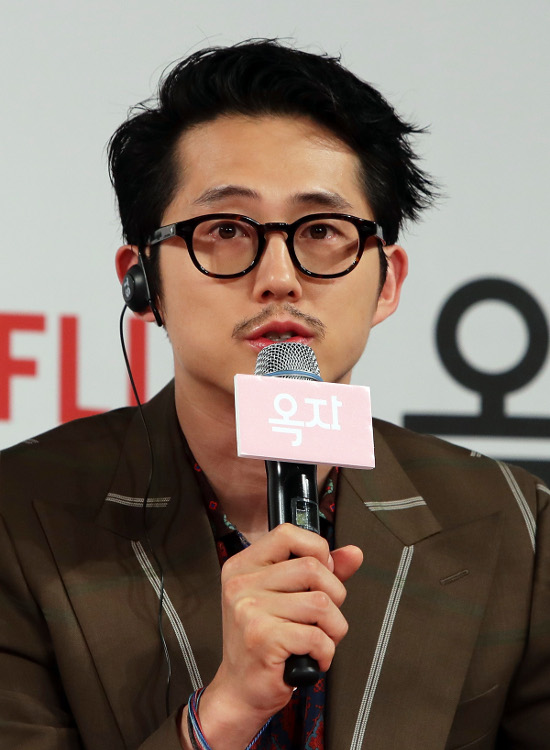 In the film, Steven Yeun plays an animal rights activist

Yeun—best known for his role in the hit TV series The Walking Dead—breaks down Bong's visual process even more. "Director Bong finds magical moments [visually], but he also is very deliberate about how composition works and how he wants to compose scenes...not because they’re just pretty pictures, but because he’s trying to direct your attention to a specific thing. Through [composition], he's saying as the director, 'I want you to watch this part of this frame because of this [specific] reason.'"

And yet, even with all the detailed planning, Bong is still a filmmaker who is very open to ad libbing. "That’s the beauty of Bong Joon Ho, I mean he’s making the film as we’re making the film," says Yeun excitedly. "Every day, he’ll wake up and we’ll go into the scene, like, 'You know what I was thinking yesterday? I would like for you to add this line, and then just play around with that.'" 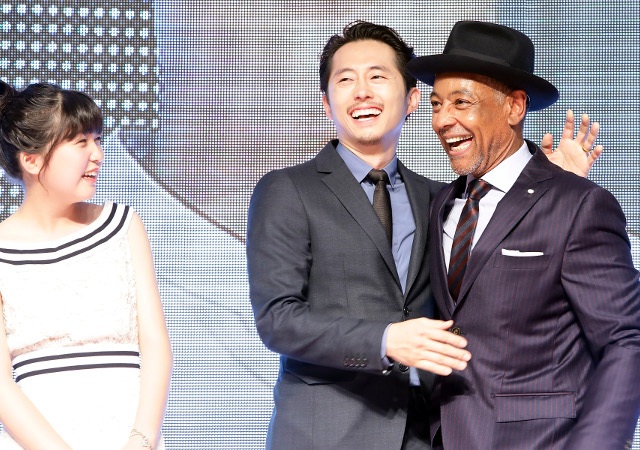 Like Snowpiercer, Okja is both an American and South Korean production and despite the differences in language and culture, it's proof of Bong's remarkable ability to transcend barriers and borders. "[It's] the things that you can communicate without any language—which is this love between this animal and this girl—that’s probably the most important message that gets conveyed and lasts throughout the film," shares Yeun.

And also like Snowpiercer (and the rest of his body of work that unflinchingly holds a mirror up to society), Okja has a lot to say about corporate greed, consumerism, activism, the environment, and perhaps more noticeably, animal rights. In short, there's a lot going on—a fact that isn't lost on his cast. 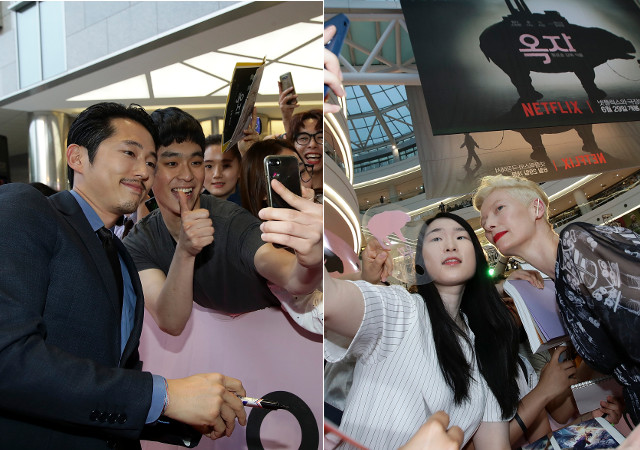 "People really wanna narrow down what the meaning of this film is [...] but I think what’s been really wonderful to see, especially after multiple viewings is that [the theme] changes every time you watch it," says Yeun. "[Bong] kind of paints a picture of what [the world] is, [not] what he wants you to see. [It's] what’s happening and he’s just showing it to you."

Giancarlo Esposito Steven Yeun Tilda Swinton Bong Joon Ho Okja Netflix
Your Guide to Thriving in This Strange New World
Staying
In? What to watch, what to eat, and where to shop from home
OR
Heading
Out? What you need to know to stay safe when heading out