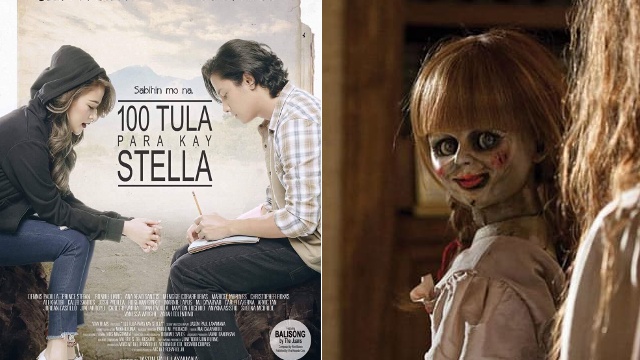 (SPOT.ph) We're right in the middle of the rainy season, but don't let the constant downpour keep you from seeing a good movie. August is filled with awesome films you shouldn't miss, from Cinemalaya entries to local indie films and even a highly awaited horror sequel. Pencil in these release dates, Spotters!

Filled with stellar editing, expertly choreographed sequences, and a fantastic soundtrack, director Edgar Wright's latest offering is about a talented getaway driver named Baby (Ansel Elgort), who tries to leave his life of crime only to endanger his loved ones. The cast also includes Kevin Spacey, Jamie Foxx, Lily James, and Jon Hamm.

Theater,  and film actor JC Santos plays Fidel, a stuttering student who has long harbored a crush on his friend, Stella (Bela Padilla). To win her heart, he writes a hundred poems dedicated to her throughout their four years of college. The promising romance is helmed by Jason Paul Laxamana.

Originally an entry to the 2016 QCinema Film Festival, this comedy-drama revolves around Iyay (Jaclyn Jose), a single mother who learns that her estranged husband has passed away. She then decides to drag her colorful little family on an epic road trip from Cebu to Dumaguete.

From the studio that brought you Heneral Luna, Bliss, and I'm Drunk, I Love You comes a mystery thriller about a farmer's daughter who accidentally kills a Philippine Eagle in a forest reserve. As local authorities begin a manhunt to track down the poacher, their investigation leads them to an even more horrific discovery. Birdshot took home the Best Film trophy at the 2016 Tokyo International Film Festival.

Prime Cruz's QCinema entry is unlike any romance you've ever seen. Ryza Cenon stars as Jewel, a manananggal who seduces men in order to eat their hearts. When a kind-hearted boy (Martin Del Rosario) moves in next door, she struggles between falling for him and giving in to her impulses.

This heartwarming tale revolves around a young boy with Down syndrome, whose only dream is to be an action star. The film follows his family (Candy Pangilinan, Acey Aguilar, among others) as they try to make his dreams come true.

Now the fourth installment in The Conjuring film series, Creation is a prequel to the 2014 hit Annabelle and tells the origin story of the possessed doll that has haunted our nightmares. The film initially premiered at the LA Film Festival, where it was received favorably by critics.

Since the announcement of Netflix's latest adaptation, reactions have mostly been mixed. Still, one can't help but be curious, considering it's helmed by You're Next and Blair Witch director Adam Wingard. Loosely based on the Japanese manga series, Death Note stars Nat Wolff as Light Turner, who stumbles upon a supernatural notebook that kills anyone whose name is written in its pages.

Based on, and reportedly a continuation of Stephen King's best-selling novels of the same name, The Dark Tower is about a Gunslinger (Idris Elba), destined to battle the menacing Man in Black (Matthew McConaughey). Both the books and the film feature elements from multiple genres, including sci-fi, Western, action, and even horror.

Manila Movie Release Dates Release Dates August 2017 New Movies
Your Guide to Thriving in This Strange New World
Staying
In? What to watch, what to eat, and where to shop from home
OR
Heading
Out? What you need to know to stay safe when heading out