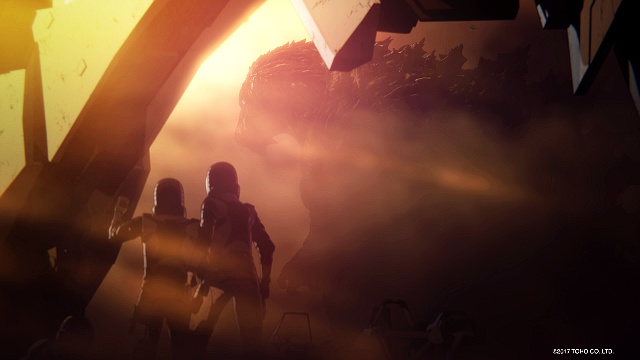 Your favorite cinematic monster is back.

Now, Netflix is entering the anime game with their own take on the fictional monster. Entitled Godzilla: Monster Planet, the full-length feature film will be the first of a planned movie trilogy. The story takes the franchise 20,000 years into the future, when Godzilla freely reigns and mankind must face the beast in an epic battle for the ages.

A release date has yet to be announced, but we do know it's set for a theatrical release in Japan this 2017, followed by worldwide streaming on Netflix. Even more exciting, the new film is animated by Polygon Pictures, a Japanese animation studio behind films like 2002's Ghost In The Shell and shows like 2011's Star Wars: The Clone Wars.

Godzilla is just one of Netflix's highly anticipated anime offerings in partnership with Japanese studios; the streaming giant is confirmed to release 12 new anime shows, but we'll be sharing more on those very soon.

Paragon Pictures Godzilla: Monster Planet Godzilla Netflix Anime Slate Netflix Japan Netflix
Your Guide to Thriving in This Strange New World
Staying
In? What to watch, what to eat, and where to shop from home
OR
Heading
Out? What you need to know to stay safe when heading out