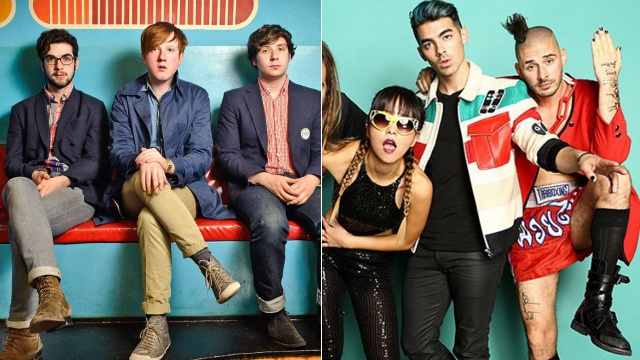 (SPOT.ph) Avid music fans have so much to look forward to this August, including the highly awaited return of the In The Mix music festival. The 2017 iteration brings together the musical talents of Two Door Cinema Club, 5 Seconds of Summer, Dua Lipa, Daya, DNCE, and Zara Larsson in one night.

To gear you up for the August 17 show at the Mall of Asia Arena, we round up just some of the songs we hope we get to see ! Don't forget to tell us yours in the comments section below.

London-raised singer-songwriter Dua Lipa rose to fame for her unique song covers on YouTube and Soundcloud. This track, in particular, is her first entry in the Billboard Hot 100 charts.

The fast-rising British pop singer's latest single, "New Rules," is reportedly on the way to the top spot of the Official Singles Chart.

Grammy winner Daya skyrocketed to fame with her hit single, "Hide Away," which peaked at the 23rd spot on the Billboard Hot 100 chart. Her self-titled debut EP was released in 2015.

"Cake By The Ocean"

Yes, your eyes aren't deceiving you: that's definitely Joe Jonas as the frontman of this dance-rock band. Formed in 2015, DNCE is also composed of bassist and keyboardist Cole Whittle, guitarist JinJoo, and drummer Jack Lawless.

Following the success of songs like "Toothbrush" and "Body Moves," the band's most recent track is this catchy ditty with Nicki Minaj.

Even if you're not familiar with Swedish singer-songwriter Zara Larsson's music, we guarantee you've heard this track playing on the radio at least once.

One of Larsson's most recognizable songs is "Never Forget You," which charted all over the world, including the U.S. and U.K. Billboard charts.

Despite being a relatively young band, this Australian group played to a sold-out show in Manila in 2016. In The Mix will be their second performance in the Philippines.

This 2011 song is one of the band's earliest released tracks, but it remains an easy and memorable favorite every time. We also love "Undercover Martyn" and "Something Good Can Work."

This track is the first single off their third and latest album, Gameshow, which was released in 2016.

In The Mix In The Mix 2017 Concert Philippine Concert Mmi Live Mall Of Asia Arena Moa Arena
Your Guide to Thriving in This Strange New World
Staying
In? What to watch, what to eat, and where to shop from home
OR
Heading
Out? What you need to know to stay safe when heading out