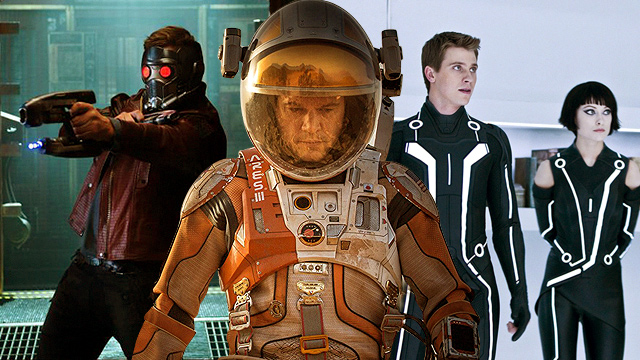 10 Movies to Watch While Waiting for Star Wars: The Last Jedi

Or if you just want some sci-fi action.

(SPOT.ph) The hype (and the Force) has never been more real ever since Star Wars released its trailer for The Last Jedi. The movie is set to be released on December 15 in the Philippines—but that’s two months too long. We got a fair share of clues from the trailer, like Luke (Mark Hamill) receiving the blue lightsaber from Rey (Daisy Ridley) with his robotic arm and Rey asking for help from (gasp) Kylo Ren (Adam Driver). But you can only pause and rewatch it so many times.

So, until we find out whether Kylo Ren and Rey are related or how they’re going to handle Princess Leia’s (Carrie Fisher) storyline, we’ve rounded up 10 sci-fi movies that will keep you entertained until The Last Jedi premieres. They've all got the high-tech gadgets, the out-of-this-world setting, and the exciting action you need to keep the Dark Side at bay.

This surprise blockbuster hit that combines old-school jams and futuristic weaponry is definitely something that will keep your need for intergalactic butt-kicking in check. Travel with Peter Quill a.k.a. Starlord (Chris Pratt) and a bunch of other alien misfits as they try to protect the world from the evil forces of Thanos (Josh Brolin)—and, well, themselves. Quill, along with Gamora (Zoe Saldana), Rocket (Bradley Cooper), Groot (Vin Diesel), and Drax (Dave Bautista) fly all around the universe to keep the orb (and its infinity stone) safe from Thanos' accomplice, Ronan (Lee Pace).

This movie picks up after the events of 1982’s Tron, where Flynn (Jeff Bridges) gets stuck inside a computer program but makes his way out—only to disappear again. Now, 20 years later, Flynn’s son Sam (Garrett Hedlund) finds himself transported into the virtual reality his father created. He soon realizes that it’s not just his father waiting for him when he arrives.

Directed by: Lana and Lilly Wachowski

In a dystopian future, humans live in a virtual reality called the Matrix while robots with artificial intelligence use humans in the real world for energy and food. Neo (Keanu Reeves) discovers this and with the help of Morpheus (Laurence Fishburne), attempts to free humans from the simulation while seemingly fulfilling his destiny as the promised one.

In this reboot of the Planet of the Apes franchise from 1968, Will (James Franco) attempts to find a cure for Alzheimer’s Disease by doing some tests on chimpanzees. This then leads to his creation of a drug that makes chimps more intelligent. Problems arise when his main test subject Caesar (Andy Serkis) starts thinking on his own and realizes that maybe the other chimps should, too.

When programmer Caleb (Domhnall Gleeson) wins a trip to his boss Nathan’s (Oscar Isaac) luxurious home, he is greeted by a servant named Kyoko (Sonoya Mizuno) and an android named Ava (Alicia Vikander). Nathan wants Caleb to see if Ava has fully developed consciousness and feeling. As Caleb grows closer to Ava, he discovers that the secrets in the home aren’t just skin-deep.

Linguist Louise Banks (Amy Adams) and physicist Ian Donnelly (Jeremy Renner) are enlisted by the U.S. Army to help decode and understand the language being detected from an extraterrestrial spacecraft. A total of 12 have landed around the world and countries are fighting over what the extraterrestrials are trying to communicate. It's up to Louise to figure out how to get the countries to listen and cooperate before it's too late.

Based on a novel of the same name, this film follows how Mark Watney (Matt Damon) as he deals with life alone on Mars after his team mistakenly presumes he's dead from a dust storm and leaves him behind. Using his skills as a botanist, he farms his own food, but potatoes can only go so far—especially if help is, quite literally, a million miles away.

A little older than the rest of the films on this list, this sci-fi epic is a certified classic. A mysterious black monolith appears on one of the craters of the moon, much like the black monolith that appeared on Earth before mankind existed. Months later, Dr. David Bowman (Keir Dullea) and Dr. Frank Poole (Gary Lockwood) are sent on a mission to go to Jupiter along with a hibernating crew and Hal (voiced by Douglas Rain), the spaceship’s computer. Things start to look sketchy when Hal starts malfunctioning and seemingly sabotages the mission.

Houston, Ryan (Sandra Bullock) has so many problems. After space debris destroys their space shuttle, Ryan and Matt (George Clooney) try to navigate their way towards the International Space Station before the debris completes another orbit and hits them again. More challenges come up as they realize that it’s almost impossible to get back to Earth.

When an alien ship lands in Johannesburg, the South African government places the extraterrestrials, called “prawns,” in a camp called District 9. One of the military officers assigned to the district, Wikus (Sharlto Copley), accidentally sprays himself with a fluid that slowly turns him into one of the prawns. He tries to find a cure through Christopher (Jason Cope), a prawn who, in turn, is trying to find a way back to his home planet.